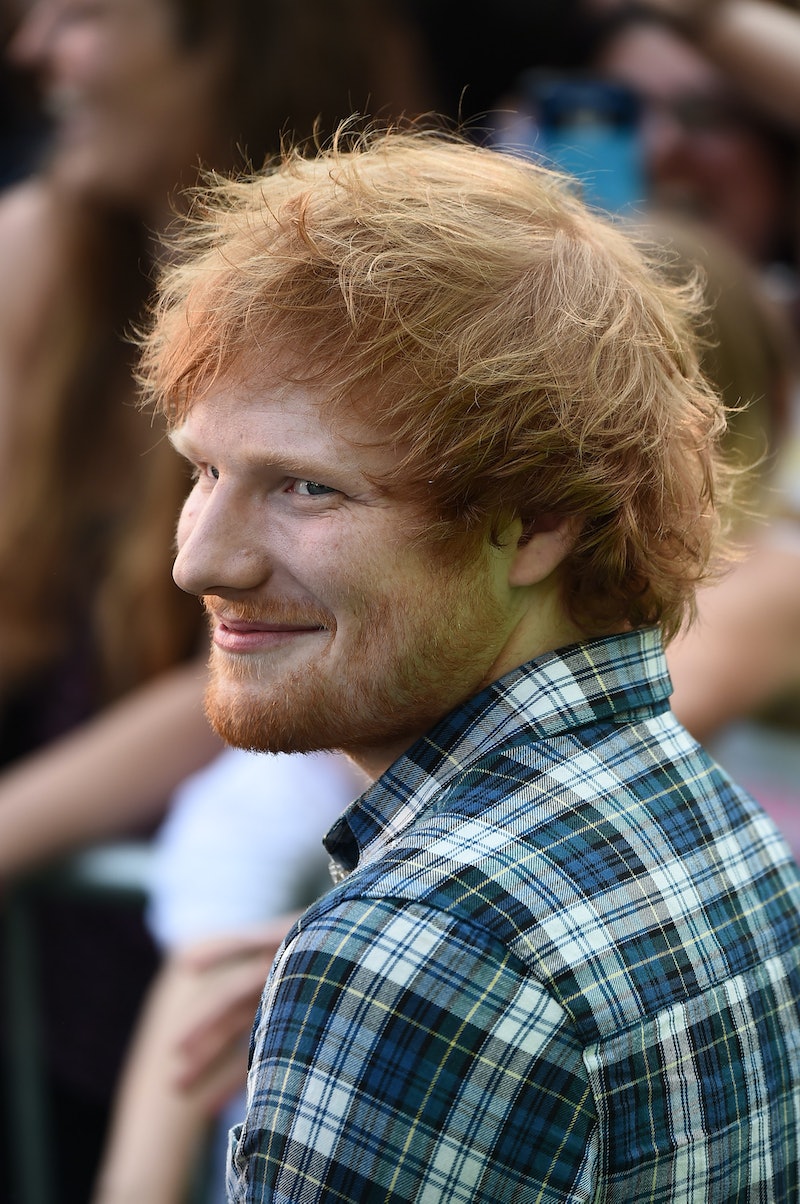 In case you were ever that girl who puked a strawberry Pop-Tart outside of her classroom in third grade (was that just me?), I'm about to console you with so many embarrassing stories of celebrities' onstage "accidents" that your one cringeworthy moment will be nothing in comparison. And I'm not doing that to take the piss outta these guys (though to be honest, the artists themselves did that already, sometimes literally). It's more like a "these celebs survived pooping their pants in front of thousands of people, so you can too" kind of thing.

Take my future boyfriend, Ginger Jesus Ed Sheeran, for example. He admitted to the whole wide world that he once "sharted" mid-performance. Now, I stan so hard for Ed Sheeran that if I had been at that show, I would've been like, "It's cool, Ed Sheeran. Just keep serenading me with 'Tenerife Sea." But it must've been so cringe-inducingly embarrassing for him. Still, he played it off like no biggie, and now he's even talking about it like it's no biggie. Goals, amiright?

Seriously, so many of today's most popular artists have used the stage like their own personal toilet, as VH1 once put it so eloquently. And though they might have felt like dying from embarrassment at the time, almost all of them later admitted to the blush-worthy incidents and laughed 'em off, proving that laughter (and sometimes a well-placed towel) really is the best medicine. Take a look at the moments below.

1. Ed Sheeran "Sharted" In The Middle Of A Performance

When asked if he ever "broke wind" during a performance, Ed Sheeran was honest. "All the time," he admitted without a care in the world, before going into further detail, because he has no problem talking about these sorts of things. "I actually once misjudged a fart onstage, which ended up being a shart. It was like midway through a performance and I was really lively and halfway through, I was like, 'I'm just gonna stand still for the rest of this performance and hope it's over soon,' and then go home and throw these trousers out," Sheeran recalled. "I'd flown from London to Tokyo to Sydney to England in the space of about three days and it just messed me up and I was very ill."

In 2012, Bieber puked mid-performance (you can watch it above if you're into that kinda thing), later explaining that MILK WAS A BAD CHOICE. "Basically, in Canada, we like to have spaghetti and milk," he told TMZ. "I don't know if that was such a good idea before my show." Probably not, Biebs. Probably not.

Fortunately enough, the brown liquid dripping down her legs (that sentence, though ...) was actually just her spray tan.

If this video doesn't make you a Lady Gaga fan, I don't know what will. Mother Monster throws up onstage in between dance moves and just keeps performing. Serious props to you, Gaga.

Harry Styles once ran offstage in the middle of "Rock Me" to go throw up, later telling his friend (and radio host) Nick Grimshaw that he ate too much beforehand. "Everyone was saying I was hungover, but I wasn't," Styles revealed. "I was just too full."

6. And Louis Tomlinson Tossed His Cookies In The Middle Of A Soccer Match

According to the Huffington Post, Rihanna once sprinted her ass offstage in 2011 to go puke. "Yep, i ran off stage to throw up, halfway thru What's My Name." the singer allegedly wrote in a now-deleted Tweet. "Made it back juuuust in time for RudeBoy." What a pro.

Her rep first tried to play it off as "sweat," but the Black Eyed Peas singer later admitted the truth.

"I sharted," he once told MTV, laughing at the memory (which starts at around 2:15 in the vid above). "Can you say 'sharted'? The crowd didn't know it, and I had an outfit change coming up, so I said, 'Yeah, I can hold it out one more song,' and this is real disgusting and too descriptive, it was just ... I can remember it running down my leg."

10. Hugh Jackman Peed His Pants While Playing Gaston On Broadway

This story is so hilarious that you just need to watch Hugh Jackman tell it. Need more convincing? He literally acts it out, and holds nothing — and I mean nothing — back.

11. Adele's Stage Fright Frequently Causes Her To Lose It Before A Show

Though the British singer has fortunately never actually vomited onstage, she gets that out of the way before performing. And then she gives no, um, cares and just does her thing. "I puke quite a lot before going onstage, but never actually onstage," she once revealed to British Vogue. "I shit myself before everything ... The bigger the freak-out, the more I enjoy the show!" (This would totally be me if I were a performer, not gonna lie.)

12. Taylor Momsen Threw Up In Her Mouth... While Singing

"It was so hot, 102 degrees or something," the Pretty Reckless singer recalled about the embarrassing moment to BBC1 Radio. "I almost threw up in the middle of the second song. I was spewing in my mouth and swallowing it back down and I kept turning around and singing." Yikes!

On the last night of her "Donnie and Marie" cruise, Marie Osmond was answering a fan's question onstage when she laughed so hard that she fell to the ground and wet herself. And then she used someone's jacket to mop it up.

14. Mexican Singer Patricia Navidad's Pad May Have Fallen Out Onstage

The above video went viral after it appeared that Navidad's sanitary napkin fell from her dress mid-performance. She later claimed that it was actually a Kleenex, but made some sassy jokes about the situation in the process.

Hey, when you gotta go, you gotta go. And if there's one thing the above videos have taught me (besides the fact that I literally just got paid to compile videos of celebs talking about "sharting" onstage), it's that as long as you keep on truckin', you can pretty much power through anything. The more you know.