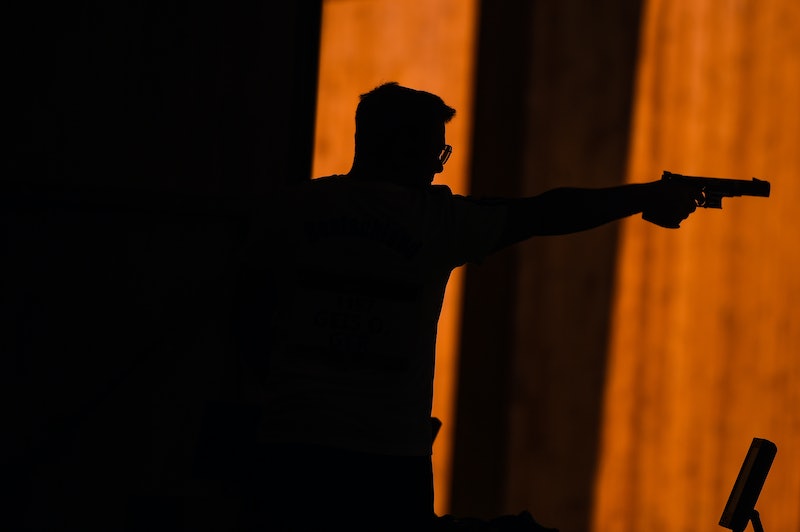 "Drifter." "Lone gunman." "Unstable." "Lone white male." These are just a few of the phrases that CBS, The Guardian, other media outlets, and local authorities have used to describe the 59-year-old white gunman who opened fire at a movie theater in Lafayette, La., before killing himself. In the aftermath of the shooting, it seems as though we've learned his life story. Everything from his affiliation with the Tea Party to his "neo-Nazi beliefs" on free speech and immigration have come to light — even the fact that he sold used car parts. And then there's the "instability" — CNN described him as a "troubled man" with a "history of manic depression and bipolar disorder." But what would have happened if the Louisiana shooter had not been white?

This trend of exploring the backstories of white perpetrators of crime has a long history. In the aftermath of the shooting at Columbine, the big question on everyone's minds was what drives young people to kill ? In his 2004 Slate essay “The Depressive and the Psychopath" — and then in his 2009 book Columbine— writer Dave Cullen explored possible answers to this question, especially as it concerned the two high school students who were responsible for the Columbine massacre. To his credit, Cullen pushed back on the "trench coat mafia" explanation used by media outlets like The New York Times in the aftermath of the attack. But given how rarely we see this type of nuanced attention focused on people of color who commit crimes, it is necessary to critically examine how we use language to describe white crime.

The Lafayette shooter's case is not the only recent example of humanizing white perpetrators of crime. Following the Charleston church shooting, during which a white gunman killed nine black churchgoers at a historically black church, public fascination with the shooter's personal history did not dissipate. Indeed, soon after the shooting, an FBI special agent appeared on CNN to say that the gunman had "some mental issues" and didn't know that he had done anything wrong. It didn't stop there — details about his tendency to "keep to himself" emerged, and even the appearance his racist manifesto was not enough to stop public speculation as to why this "loner" carried out the attack.

If we were discussing the psychology of crime in a vacuum, then maybe it would not be quite so apparent why all of this is problematic. But, obviously, that is not the case — these detailed discussions of white shooters, which search so desperately for some sort of justification or explanation for their actions, present a stark contrast to the discussions that result when a Muslim shooter, for example, arrives on the scene.

Think back to the Boston Marathon bombing, for instance. A controversial Rolling Stone cover that featured one of the perpetrators — and resulted in a great deal of backlash for glamorizing him — described him as a "promising student" who turned into a "monster" after falling prey to "radical Islam." And for outlets like CNN, the explanation that the bombers were radical Islamic terrorists was sufficient; their backstories, provided by BBC, were almost an afterthought.

Then, there was the attack on Parisian publication Charlie Hebdo in January. The gunmen who attacked the publication's office yelled "Allahu Akbar" before carrying out the attack, and the response throughout Europe was immediate as the rate of anti-Muslim violence dramatically increased. What the international cries of "Je Suis Charlie" masked was the Islamophobia that had been there all along. France didn't want to know anything except how the perpetrators were radicalized on French soil — they weren't human, they were terrorists. Their backstories were not relevant.

So why is it necessary to convince people that all Muslims are not to blame for terrorism, when they already seem to believe that white crime is isolated? Why do the names and personal histories of white shooters live on in infamy? Trying to answer these questions necessitates a discussion of the power of language and imagery in the public sphere, as well as an analysis of how people of color are subjected to racism and xenophobia.

People of color are not only dehumanized if they've committed a crime, but also if they've done something heroic, if they're the victims of crime, or even if they're minding their own business. When James Jones, a black man on Chicago's South Side, died protecting his mom from gunfire, local media outlets like the Chicago Sun-Times chose to focus on his "troubled past." When Michael Brown, a young black man from Ferguson, was killed by a white cop, he was portrayed as a "thug" who had stolen something, as though that somehow justified racist police brutality.

Don't forget all of the women of color who have been killed this year, either — Sandra Bland and Kindra Chapman were recently found dead in police custody, and India Clarke, a black trans woman, was killed in Florida earlier this week. "Maybe Bland would still be alive if she cooperated with state troopers" is something we would probably never have heard if she had been white.

The discrepancy between the treatment of white shooters and shooters of color is much bigger than the discussion of mass shootings. It has its roots in institutional racism. Let's explore that in a little more detail: White shooters are treated as individuals, with pertinent personal histories that somehow explain their actions. Shooters of color are treated either as "thugs" or "terrorists" who are "gang members" or "Islamic radicals" — essentially, they are treated as one-dimensional and perceived as representative of entire organizations, religions, or countries with a single goal in mind. Just as Islam cannot explain a mass shooting, neither can mental illness.

You might have noticed that I chose not to name any of the shooters I discussed in this article. That is because I firmly believe we should be paying a lot more attention to victims and survivors of their attacks than to the perpetrators themselves. I understand why we might collectively be fascinated by the causes of mass violence, but I do not believe that this fascination obligates us to glorify or pay lip service to those responsible for it.

There is a decision that needs to be made here. Either we talk about mass violence as the result of the system in which we live, or we talk about it on a case-by-case basis. But allowing white perpetrators to exist as three-dimensional figures whose life stories are carefully crafted for public consumption while simultaneously discussing perpetrators of color solely in the context of their alleged radicalism or "suspicious nature" is hypocritical, and we need to be cognizant of that. Humanizing white perpetrators of crime is just one more way in which we demonize people of color, and is another symptom of white supremacy and privilege.

Every single day, white suspects are given the benefit of the doubt more than victims of color, never mind suspects of color. Remember, language is powerful, and when we talk about mass shootings, we need to think critically about who we are really trying to honor.

More like this
6 Organizations Fighting Police Brutality That You Can Support Right Now
By Syeda Khaula Saad and JR Thorpe
15 Black-Owned Liquor & Wine Brands To Add To Your Bar Cart
By Alexis Morillo
8 Charities To Donate To During Black History Month
By Alexis Morillo
These Artists Are Reimagining Black History Month To Create A Better Future
By Katie Mitchell
Get Even More From Bustle — Sign Up For The Newsletter
From hair trends to relationship advice, our daily newsletter has everything you need to sound like a person who’s on TikTok, even if you aren’t.