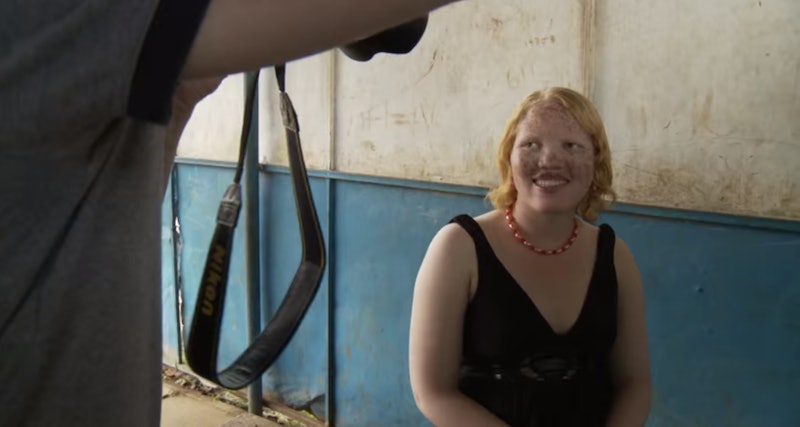 "We are not ghostlike. We are just human beings," said Jayne Waithera, a young Kenyan woman, in the trailer for On Beauty , a documentary that aims to shake up what it really means to be beautiful. The film centers on Rick Guidotti, a fashion photographer who has shot classic beauties such as Cindy Crawford for top magazines, Vogue among them, before leaving his high-paying gig. "I was always told who was beautiful, and as an artist, I didn't just see beauty on the covers of magazines, I saw it everywhere," Guidotti told PEOPLE.

And so he set out to capture a different kind of image. "Nothing standard will ever be beautiful," he said in a trailer for the doc, and the portraits that resulted from his mission, stunning images of young people with conditions like albinism, are proof positive. And don't try to chalk it up to being beautiful on the inside, either. "Fuck inner beauty! These kids are gorgeous!" Guidotti said in the film's trailer.

The two-minute trailer already made me realize how narrow my own standards of beauty are, even when it comes to seemingly innocuous details. For example, I inwardly balked when a makeup artist poised a pink pencil to fill in Jayne's brows. "No!" I thought to myself, "Not pink!" before I realized what is actually pretty obvious: Not every makeup pencil has to be brown or black, because — not everyone looks the same.

Fashion magazines, sadly, seem to have been pretty reluctant to challenge their own standards of beauty, according to commentary in the trailer. "I had given up on the idea of a fashion magazine running photos of Ricks, and I hope I'm wrong," said designer Ralph Rucci. "Nobody jumped on board," continued another commentator in the film. "People were still looking at this as an art form. They didn't understand this is a human movement."

The movie, which was directed, produced and edited entirely by women, by centers around Guidotti and his subjects, among whom are Sarah Kanney, a beautiful young woman with Sturge-Weber syndrome, a genetic disorder that caused her to be born with a prominent birthmark on her face. She has been homeschooled since middle school because of bullying, but has found purpose in racing motocross — although she admits that part of the appeal for her initially was being able to wear the helmet, which frees her from stares, curious and menacing alike.

Waithera, the gorgeous Kenyan teen, has also experienced bullying — and worse. She's been called plenty of names in her home country, and among the most chilling is "walking banknote," which alludes to the fact that in East Africa, witch doctors literally hunt people with albinism and sell their body parts.

Despite overcoming huge, and no doubt painful, obstacles, the films stars are doing just fine. Since filming wrapped, Kanney has stopped wearing makeup to cover her scar. She has a job and is studying for her GED, according to the On Beauty website. Meanwhile, Waisthera has helped create Positive Exposure Kenya, which spreads the message of awareness and tolerance.

The film's website URL literally says it all: iambeauty.me. Head over there to learn more about the documentary, its stars, and where you can see it in a city near you.