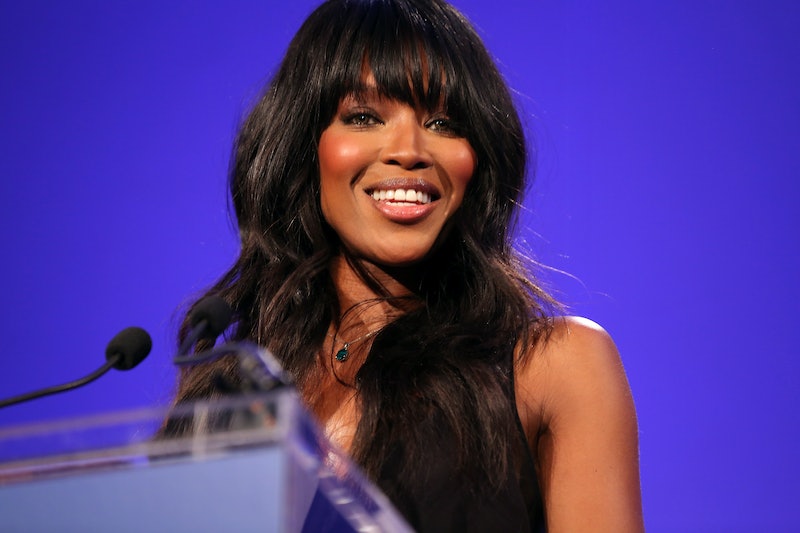 Looks like there's gonna be a mother-effing walk-off on the upcoming season of American Horror Story: Hotel because Naomi Campbell has just signed on for the upcoming season. According to TV Line, "Campbell — who starts shooting next week — will play a fashion editor who pays the ultimate price for her critiques. In addition to [Lady] Gaga, she will also have scenes with returning AHS alum Angela Bassett." Sounds dramatic and glamorous and gory — a winning combination if ever there was one. Let's take this news as a moment to celebrate Naomi, a living legend.

Naomi Campbell, now 45, was practically modeling when she came out of the womb. She got her start at the age of five in a Bob Marley video, which is not a bad way to start your career. The trajectory of her stellar career as a bonafide supermodel began when she was discovered at the age of 15, and now, 30 years later, she's still one of the most recognizable faces in the global fashion industry. During the '90s, Campbell and her squad of supermodel friends dominated the runways and magazine covers the world over, creating a legacy that's allowed her star to continue to rise. Plus, she's just so damn cool.

She's One Of The World's Only "Real" Supermodels

Campbell, Linda Evangelista, Christy Turlington, Cindy Crawford, Claudia Schiffer, and Stephanie Seymour make up the Big Six, aka the first six women in the world to be called supermodels Squad goals for sure.

She's Been In Some Incredible Music Videos

She's worked with the biggest of the big, including Bob Marley (when she was just five years old), Madonna, and Michael Jackson.

Campbell has never been one to be quiet about the racism of the fashion industry, not even in her early years. In 2013, she and fellow fashion icon and goddess Iman got so fed up with the lack of diversity on the runways and in editorials that they started a campaign to put an end to the whitewashing, writing letters to major houses and calling them out for only using white models. "When I started modeling in '86 there was Asians, blacks, whites, Indians, Chinese. It was very diverse," Campbell told CNN. "It's not like that today. It's heart-breaking to me that we're in 2013 and we're sitting here talking about this. But it has to be done and people need to know."

In June, in an interview with Dazed, Campbell revealed that she has a private WhatsApp group for the young black models in the spotlight now — including Joan Smalls and Jourdan Dunn — who have turned to her for support when dealing with racism that is still pervasive and ugly in the industry. Campbell told Dazed, "I have to watch out for my babies. A lot of them, their hearts were broken this time in Paris. I got the calls, I got the texts."

And Did I Mention The Music Videos?

I know. I did. But I would be remiss to chronicle and condense Campbell's brand of cool without reminding you of George Michael's video for "Freedom" in 1990, which is, in my own humble opinion, the sexiest music video of all time.

In short, Naomi Campbell is still setting the world on fire — and will continue to do so on AHS — so don't forget it. And if you do...

More like this
Spice Girls’ Net Worth: The Richest Member Is Wealthier Than The Rest Combined
By Hugh McIntyre
Twitter Has Very Mixed Feelings About The New 'American Idol' Winner
By Jake Viswanath
Mick Jagger Calls Harry Styles A "Superficial Resemblance" To His Younger Self
By Jake Viswanath
Halsey Calls Out Label For Asking Them To "Fake A TikTok Moment" For New Song
By Jake Viswanath
Get Even More From Bustle — Sign Up For The Newsletter