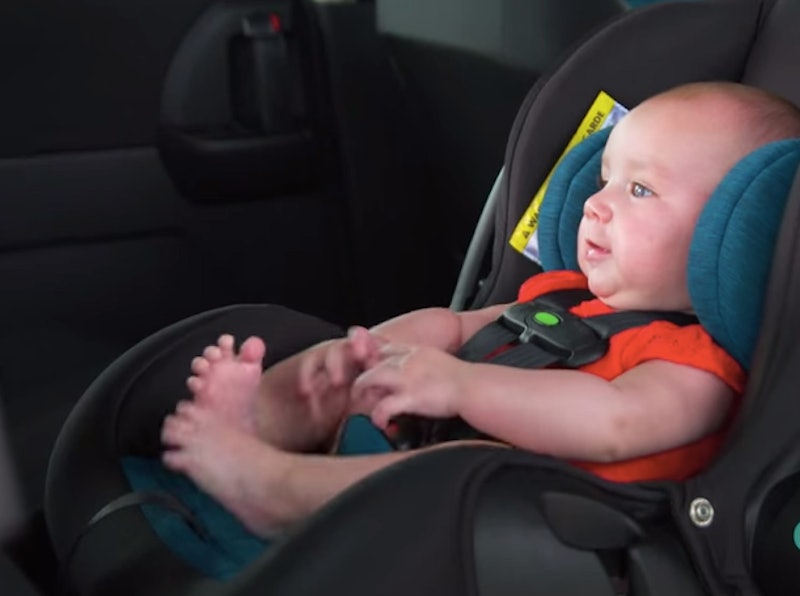 It's a heartbreaking story you've no doubt heard way too often. A busy parent is whipping through a stress-filled day when they swing into a store or race into the house and totally forget their sleeping baby in the backseat of the car. For some, it will only take minutes before they notice; but for others, it will be tragically too late. This week, though, the world's largest retailer announced plans to change all that, or at least try: In partnership with Evenflo, Walmart will sell heat-stroke sensitive car seats that will actually alert parents when the car is turned off and a baby is still strapped in.

The one-year-long exclusive deal between Walmart and Evenflo will officially start next month, according to a statement on Walmart's website. That's when the Evenflo Embrace DLX Infant Car Seat debuts in stores and online. And if you're wondering how it all works, it's pretty cool: A wireless receiver plugs into the car's On Board Diagnostic (OBD), which syncs with the chest clip tied around the baby. If the car is turned off while the chest clip is buckled, there's no way the alarm could be ignored — a series of tones will play loud enough for the driver (and anyone standing nearby) to hear.

Walmart, for one, is pretty proud of the innovative car seat, which can be yours for the cool price of $149. In an official statement, Walmart vice president Diana Marshall said:

At Walmart, saving our customers' money is our number one priority. But one of the biggest honors we have is helping them take care of their greatest gifts. We know having a baby is an exciting time for new parents. It’s also challenging, expensive and exhausting. We know because we're parents too.

While the technology is pretty impressive, this actually isn't the first time an invention like this has made headlines. Over the last few years, plenty of amateur inventors have created gadgets to help keep babies from being left in cars. Seventeen-year-old Alissa Chavez got a ton of attention last July for the "Hot Seat," a sensor pad that's placed under a baby's car seat cover. The pad actually communicates with the key fob on a parent's keychain and is set off once a parent travels more than 40 feet away from the car. Later that year, a teacher named Susan Quave also made headlines for her own invention, which features an alert system that literally tells parents "Don't forget the baby," when they get out of the car. There was also Andrew Pelham, a 12-year-old from Tennessee, who in 2013 invented the EZ Baby Saver out of rubber bands and duct tape. The DIY invention can be tied from the driver's door handle to the back of their car seat, reminding parents to always check behind them before getting out.

News of the Walmart-Evenflo deal comes just days after video went viral of a Kansas woman breaking into a hot car when she noticed a toddler left inside, unattended. "The windows were totally rolled up, all the doors were locked," Sarah Oropeza later told KPTV. "She was covered in sweat. When I looked in the back window, she was covered in sweat. She had pulled her hair back and sweat was just dripping." Using a tire iron, Oropeza busted her way into the car and rescued the little girl before a crowd of relieved onlookers. It wasn't long before video of Oropeza's amazing efforts went viral, and she was being called a hero.

According to KidsAndCars.org, some 38 children die in cars from heat-stroke related accidents each year — and it doesn't just happen to young babies who might be asleep in the backseat. One thing's for sure: if this new car seat from Evenflo really does prevent more hot car deaths, it could pave the way for other manufacturers to get on board, too. And needless to say, that would be huge.