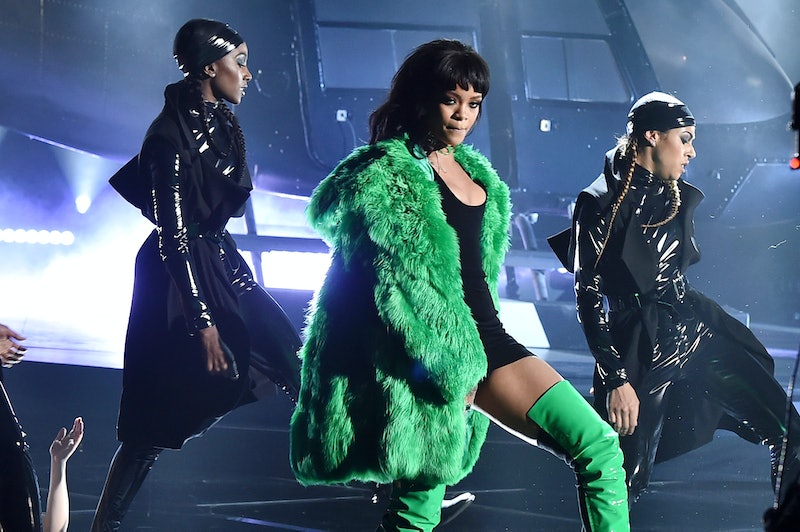 There's a reason why everyone wants to work with Rihanna: she's a one-woman recipe for success. According to its latest quarterly report, Rihanna boosted Puma's sales 7.9 percent (around $848 million) after the company named her its brand ambassador and women's creative director. The athletic brand's partnership with the fashion icon was announced last year, and featured her in multiple in-store marketing campaigns worldwide. Their successful collaboration continues with the launch of the Puma x BADGAL collection later this year.

"Proud to be on the team!!!" Rihanna said earlier this month along with the first images from her Puma capsule collection on Instagram. The black and white photo showed the "BBHMM" singer wearing head-to-toe Puma along with the hashtag #ForeverFaster. But even prior to RiRi's Puma x BADGAL announcement, the hit singer proudly represented the brand with her street style. While Rihanna's red carpet and onstage getups tend towards high fashion and avant garde, she can also pull off athletic wear like a boss.

Of course, having Rihanna as the face of your brand comes at a price. Puma reportedly spent 20.4 percent more (around $392 million) than the previous quarter due to its partnerships with the singer as well as the English football club Arsenal. But that's a small price to pay for someone with a powerhouse presence in the media and loyal following as Rihanna.

Rihanna is the perfect brand ambassador for Puma not just for her confident style, but also for how she effortlessly chic she looks, even while going to the gym or recording studio. Here are just some snapshots of the singer out and about in Puma:

When She Paired Her Pumas With Camo

Her Skater Goes To The Gym Look

Black and White On Fleek

Nobody wears Puma better than RiRi, that's for sure!