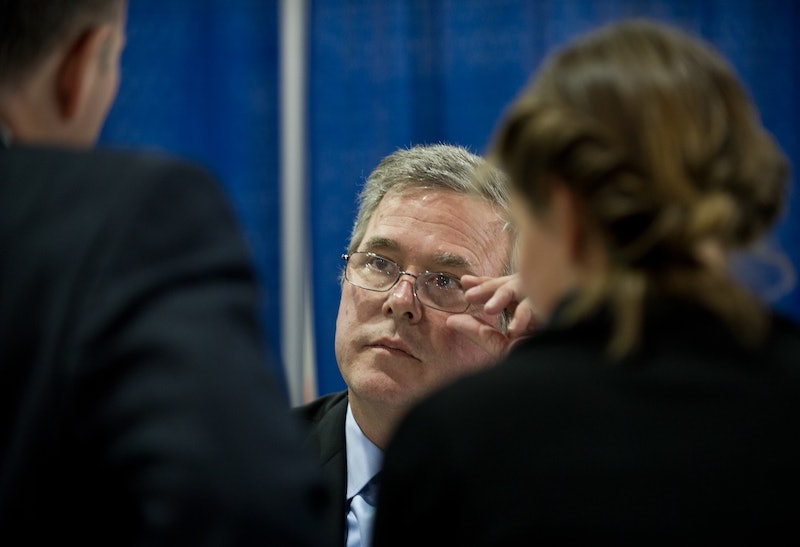 Jeb Bush's poll numbers may have received a welcome boost since mid-July, but his latest endorsement is anything but desirable. In a video message played at the pro-life, National Right to Life Convention in New Orleans, La., on July 10, former Bush associate Mark Merrill endorsed the erstwhile Florida governor, citing Bush's tenure as proof of his willingness to "protect life." A Tampa radio host and author of the book All Pro Dad, Merrill's endorsement could have been the second wind Bush needed to keep his rising survey numbers on the up and up. Given Merrill's antiquated, anti-feminist ideals, however, the endorsement might do more harm than good.

According to MSNBC's Irin Carmon, the former Family First co-chair and transition team chairman on Bush's "Building Florida Families" commission now spends his days blogging about "parenting, marriage & relational truth," as detailed in his Twitter bio. His timeline is full of seemingly tame and encouraging posts, such as one that reads, "Knowing the truth, speaking the truth and living by truth are at the heart of being an authentic person and parent." In another tweet, Merrill advises, "Don’t wait for your daughter to ask you if she’s beautiful. Look for opportunities to tell her."

On the surface, Merrill's own words paint him as a kindhearted believer-with-a-capital-B. His blog posts, such as this one, titled "10 Essentials for the Successful Dad," are gentle and perfunctory in their nature, with Merrill doling out advisory reminders that both parents should be "united" in their disciplinary tactics.

Beneath the wholesome exterior, however, Merrill's advice becomes much more archaic and anti-feminist than a simple, "Tell your daughter she's pretty!" A second glance is all it takes to realize that his faith-driven counsel might not have their best interest (or Bush's desperate need for the working woman's vote) in mind. Below are some of the more unusual things he's said that give a bitter aftertaste to his recent endorsement and give modern women a reason to shy away from casting a "Jeb" vote.

Wives Should "Give Their Freshest And Best" To Their Husbands

"If you don’t make your husband a top priority, your marriage will suffer," counseled Merrill in a blog post from January. "Wives, please remember to give your husband your freshest and best, not your leftovers."

Is this a dinner metaphor? A sexual metaphor? Either way, it's uncomfortable and displays exactly the kind of vintage thought many men espoused in the 1940s and '50s. If you're still confused by whether Merrill meant that women should venerate their husbands as a pagan god or whether he meant they should put down the day-old meatloaf and slowly back away, he clarifies later,

Be careful not to question his judgment and abilities. ... Your sexual relationship is not a game. It should not be used to get what you want. It should be a very important part of your relationship. It is not something that must be “earned” by your husband, but rather should be “freely” given in your marriage relationship.

In a similar post titled, "7 Things Husbands Should Stop Doing" from earlier in January, Merrill suggests that men should outright ask their wives if they'd like help or not before their wife launches into a tirade over a sensitive topic:

When Susan tells me about something, instead of jumping in to fix it, I often ask her something like, “Do you want me just to listen or do you want my input on how to deal with it?”

Or maybe just listen without asking condescendingly asking your partner whether she actually wants your heroic advice. That works too.

Merrill tells women, in a post titled "5 Unfair Expectations On Your Husband,"

Men are wired visually. All men are tempted. It’s a fact that makes life difficult for every guy living in this sex-obsessed culture. When a wife expects that he will never be tempted, she is ignoring this fact.

Sorry, Merrill, that's skirting dangerously close to "victim blaming" territory ("She was dressed provocatively! Men are visual! Clearly she was asking for it!") and tramples on a study out of Ohio State University that suggested women, too, are highly sexual creatures that simply know better than to be so obvious about it. Hey, who says wives aren't just as tempted as their husbands?

Your wandering eyes and careless words may cause your spouse to feel insecure, inadequate, and without value. It’s degrading to your spouse as well.

It's a fantastic piece of advice that unfortunately doesn't mesh completely with his earlier statement that "men are wired visually [and] all men are tempted," and that women shouldn't expect anything else.

In the same post, "7 Things You Should Stop Doing To Your Spouse In Public," Merrill explains that women shouldn't wear clothing that flaunts their body (although he mentions men too, it's fairly obvious the sentiment was likely aimed largely at women):

Stop flaunting your body to others. This applies to men and women. Our culture does not value modesty, and when you flaunt your features, it appears you’re advertising yourself or are available to others. Dress like you’re only available to one person, your spouse. Because that’s the only person you should be available to.

That's the most polite slut-shaming ever known to mankind.

Girls: Don't Swear, Because It's "Unattractive"

This one's rather unfortunate. Given the fact that his corresponding post for fathers and sons includes a notable line that instructs boys to "respect a woman physically by honoring her body and accepting that it is reserved for her future husband" (Merrill does veer off-course a bit by then adding that women have "special ways" of thinking), his advice to young girls is disappointing. To fathers raising daughters, Merrill suggests,

Teach her to be a lady in the way she dresses. ... It means to use lady-like language… crassness and cussing are very unattractive. It means to use good manners. It means to draw physical boundaries and let men know that her body is reserved exclusively for her future husband.

Did someone show him this study, showing that although they're waiting a little longer, teens are still having sex — and that they're being smarter about it too, given that teen pregnancy rates, though still relatively high, have dropped 57 percent since the early '90s, thanks largely in part to comprehensive sex education, rather than abstinence-only education? Does he somewhere have information stored that proves men hate women who swear? Did anyone tell him it's 2015?

Although Merrill isn't officially on the Jeb! 2016 roster, or in any way professionally associated with it (that we know of), there's discussion to be had over whether his endorsement, and all the backward, anti-feminist rhetoric that comes with it, is helpful or hurtful in the long run. Certainly, with the fight to maintain a positive relationship with female voters a very real struggle for all GOP candidates, reconsidering the proximity of Merrill's ties to the Bush campaign could be the next item on the agenda.

So far, the Bush campaign has not publicly commented on the man behind the endorsement or responded to Bustle's inquiry, with communications director Tim Miller choosing only to tweet,

MSNBC seriously wrote an article in which they criticized this tweet by Jeb supporter Mark Merrill as "gendered."