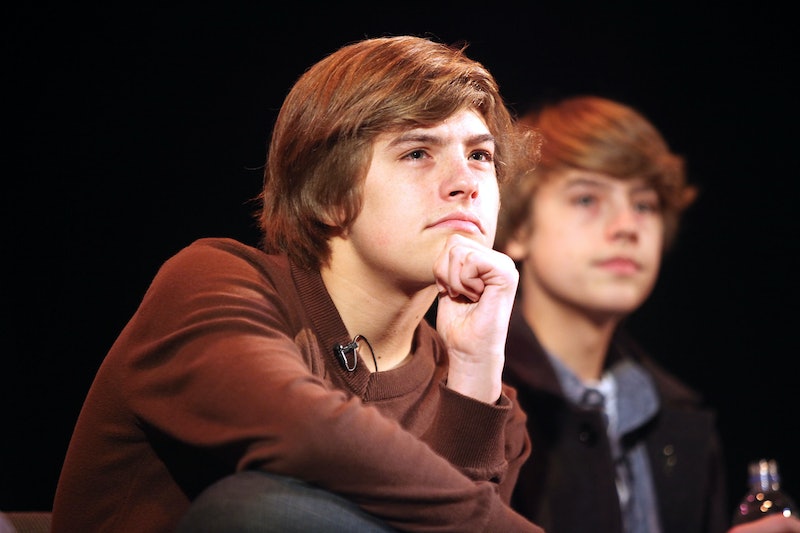 The battle royale to end all Disney battles of the past: The Jonas Brothers vs. The Sprouse Twins. Well, maybe more like Joe Jonas vs. Dylan Sprouse. On Dec. 1, Vulture ran its piece on Joe Jonas and the perils of growing up in the Walt Disney child-fame machine, which basically served as an excuse for Jonas to bash the company that made him and his brothers the most famous boy band of the late 2000s. Early this morning Dylan Sprouse, half of the duo that brought you The Suite Life of Zach and Cody and The Suite Life On Deck, took to his Tumblr account to respond to Jonas playing the victim to Disney's executives and basically called him out in a way we wish we all could for being a very public crybaby.

The Jonas Brothers recently announced their band's split and seem to be assimilating into post-Disney life with less ease than the Sprouse twins (who are pursuing degrees at New York University and working hosting jobs to pay for their expensive gaming habits). It's only natural that Dylan had something to say about Joe victimizing himself. So here's the best responses from Dylan's Tumblr post to Joe's woe-is-me article:

I read the article and I have a couple things to say. Most formally the idea that Disney and the corporations “gentrified them.” — Dylan

And so we begin... Let's start with what Joe said, and follow it up with Dylan's response.

Joe: But the thing about the show was that some of the writing on it was terrible. It just ended up being some weird slapstick humor that only a 10-year-old would laugh at. They took out the kissing scene that Nick had. I had to shave every day because they wanted me to pretend like I was 16 when I was 20 (when the show was done, I cut my hair off and grew as much of a beard as I could). We went along with it at the time, because we thought Disney was our only real shot, and we were terrified that it could all be taken away from us at any moment.

Dylan: I think it’s bullshit that they were being robbed of choice or creativity. If they wanted too, they could have told Disney “NO”. Cole and I did this hundreds of times and we ended up all right.

Bottom line: Open your mouth or don't cry about it later.

We went from an opening act to headliners, first in half-theaters, then full theaters, then half-arenas to full arenas, all within a span of around six weeks. Playing the Texas state fair in 2007 was a turning point. There were 40,000 people, and we needed to get a helicopter in order to make it to the show because the traffic was so bad. I remember sitting in that helicopter, flying over all those cars, and thinking, This is really happening.

The only reason they didn’t is because, like many of the people on that channel, I think they fell for the allure of fame. Granted, Cole and I had been acting our entire lives, so we saw it as a means to an end (money making) rather than an opportunity to become successful.

Bottom line: You just wanted to be famous, you fell for the glitz and were too afraid to lose it, and you didn't acknowledge that above all else, this is a business.

Because of our age, because of Disney, because of those rings, there were so many things throughout our career that we had to sugarcoat. If a lyric was slightly sexual, someone at the record company would tell us we had to change it. It could be the most innocent reference, like “I’m alone in a room with you,” and it would have to go. It felt like we couldn’t be creative, so we stopped listening to them and just started handing shit in.

Nowadays artists just assume they have to do what they are told by their proprietors because there is a “rigid structure to achievement”. It is nothing more than a scheme to rob you of your individuality and capitalise the gain they acquire from such treachery. If you believe this, not only are you incredibly foolish, but you are a BAD ARTIST.

Bottom line: Again, you could always say no before the situation escalates to you penning a "tell-all".

Being a part of the Disney thing for so long will make you not want to be this perfect little puppet forever. Eventually, I hit a limit and thought, Screw all this, I’m just going to show people who I am. I think that happened to a lot of us. Disney kids are spunky in some way, and I think that’s why Disney hires them.

Individuality is modernity’s most interesting trait regarding artwork and so so many talented individuals realize this. You do not have to become something else to be successful.

Bottom line: It took you too long to realize this, Jonas Brothers.

I’m not offended that everyone would think we were a boy band; I like some boy-band music. Even yesterday, somebody said, “You still dance, right?” and I said, “I never did that.” But I can see why people saw us that way. We largely had a teen audience, and we’ve been on teen-pop magazines where you’d have to cuddle puppies. We wanted to be perceived as a cool band, one that plays its own instruments and writes its own songs, but a lot of people didn’t notice that.

Not only is it not too late for them to redefine themselves now, it was never too late.

Bottom line: If you don't like what people see, stop whining about it and change it. Crybaby.

Sprouse comes from a unique place, having spent six years under Disney's umbrella as part of a set of brothers, to call Jonas' out on his B.S. victim act. He claims that he and his brother Cole said "NO" when it was necessary and we're inclined to believe him, considering how seamlessly they transitioned from Disney to real life. The Sprouse twins may not have been world-wide phenomena along the lines of the Jonas Brothers, but they lived the life with them. Sprouse also made a good point about Jonas' article in saying: