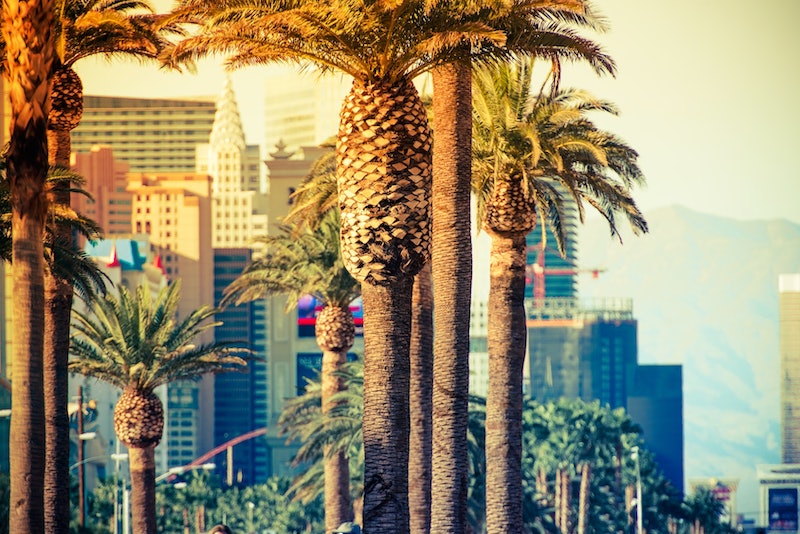 Something clearly went very, very wrong at one luxury resort on the Las Vegas strip. According to multiple outlets, including ABC News and The Las Vegas Sun, a huge fire broke out in the pool deck area of The Cosmopolitan, and it was such a hazard that parts of the strip had to be closed off entirely. If you're curious to see some of these shocking photos from the Las Vegas pool fire, well, they're all over social media right now.

The area affected by the fire was reportedly the Bamboo pool deck, and according to ABC News, at least one person was injured and was transported for medical care. Hopefully everyone will be okay, because on appearances alone, it looks like a pretty intimidating, hazardous scene — thick smoke clouds billowing up into the desert sky, and bright orange flames licking around the pool platform. It all makes for a pretty ominous visual, to say the least.

Thankfully, recent reports indicate that it's since been put out, leaving a burnt, decidedly not-ready-to-party pool deck in its wake. Here are some of the startling images people captured of the blaze.

Las Vegas's local Fox affiliate KVVU now reports that at least two people suffered burns in the fire, and they quote Clark County Fire Chief Eric Newman, who says that the blaze began on the 14th floor of the resort. It was reportedly extinguished about 40 minutes after it was first reported, around 12:55 p.m. local time.

It makes sense that this kind of fearsome sight would draw a lot of eyeballs, given The Cosmospolitan's prime position on Las Vegas Boulevard. After all, Sin City (as it's sometimes called) is one of the most tourist-trafficked places in the world, and virtually everyone is going to whip out their mobile devices in confusion when they see black smoke rolling through the air. It's not limited to just photos, either — plenty of people grabbed video of the harrowing scene.

Suffice to say, it looked more than a little intense. The pool deck had been home to several palm trees, which you can see blazing away in the videos posted above. Also, if you're looking for a really rare sight, check this out — a long section of the Las Vegas Strip, entirely emptied out during the fire. I'd be willing to bet you won't see that street so empty again anytime soon.

More like this
How The City Healed Five Years On From The Manchester Arena Attack
By Ella Glover
Michigan’s Governor Is “Going To Fight Like Hell” To Protect Abortion Access
By Andrea Zelinski
What To Know About Taking More Than 1 Piriteze Per Day
By Bustle UK
The 6 Best Balaclavas To Keep Your Face, Head & Neck Comfortably Warm
By Jenny White
Get Even More From Bustle — Sign Up For The Newsletter