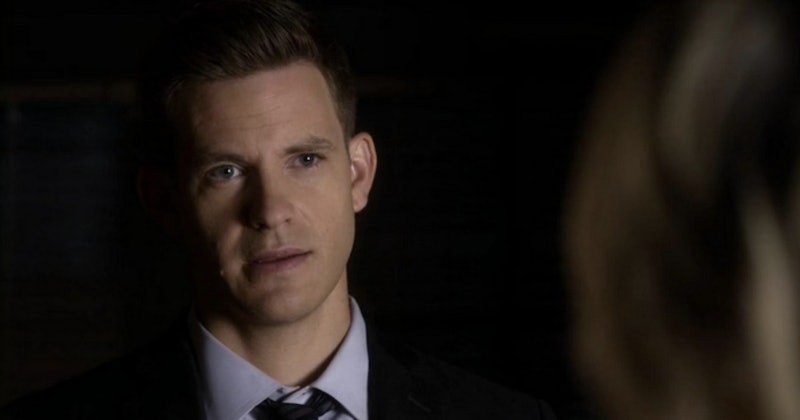 In Rosewood, Pennsylvania, no one ever really dies. Though there have been numerous deaths or suspected deaths on Pretty Little Liars, how many of them were missing a body (Maya, Ali, etc)? How many were faked (Mona)? Nothing is ever certain, and that’s why I’m starting to explore other options as to who could be Big A. Currently, one of my top theories is that Detective Wilden is Charles DiLaurentis on Pretty Little Liars .

In last week's episode, we saw a home movie of Jessica — the mother of Charles, Ali, and Jason — throwing a party for Freddy, who Ali said was some second cousin of the siblings. Except it seems that "Freddy" was actually Charles, and this was just Jessica's way of letting all of her kids play together and have a little fun without revealing Charles' background to them. Most importantly, the kid in that funhouse flashback looked a hell of a lot like Darren Wilden. Could it be that he came back to Rosewood posing as a cop to gain intel on the Liars and their families? Charles has access to a ton of weapons and weird hacking technology, which he could've gotten by infiltrating the Rosewood PD. And with everything else that's happened, it’s not much of a reach to say that he could've faked his own death — just like Mona and Ali. For more clues about Charles, check out Bustle's PLL podcast, then see just how Wilden could have been Big A all along.

Wilden Is Connected To Cece & Melissa

When Spencer was super convinced that her sister was either A or on the A team, Melissa told Spencer that she had been protecting her since the beginning. Melissa helped Cece flee the country for France because she had killed Wilden and thrown him into the trunk of a car. But what if Jason actually knew that his brother was alive and asked Melissa and Cece for help, spawning this whole chain of events? Melissa and Cece would have known that they weren’t killing a crooked cop — they were going after Jason’s imminent threat of a brother.

It Would Explain Jason's Disappearance

Jason and Ali are the crown champions of compartmentalization (actually, all of the DiLaurentises are, minus Charles), so maybe when Wilden came to Rosewood, posing as the investigator of Ali’s disappearance, it jogged something in Jason’s mind. He could have realized that Wilden looked mighty similar to a kid he grew up with. When Jason realized what he was up against, he disappeared himself to try and figure out Charles’ motivations. That’s why he told Spencer he was in a rehab that had closed a few years earlier — he wasn’t in rehab at all. He was doing reconnaissance work.

Jason May Have Switched Sides

Remember when Jason disappeared for a while? Like, I said, I think he was gathering intel on Charles and the whole situation of him being locked up in Radley. That’s why at one point in the show, Jason is firmly anti-Liars and sides with Mrs. DiLaurentis. Maybe he had a meeting with Charles, aka Wilden, who told his younger brother his side of the story. Or maybe Mrs. D. did. Either way, I believe that Jason has known about Charles being Wilden for some time, and he just didn’t know what to do with the information.

Stranger things have happened in Rosewood, you guys, and Wilden has been hanging around from Pretty Little Liars' very first episode. My bet is that this crooked cop is more than crooked — he’s Charles DiLaurentis, and Jason and Ali both hold the key to this mystery.

More like this
'Ghost In The Shell: SAC_2045' Was Only Supposed To Last Two Seasons
By Kadin Burnett
What’s New On Netflix: 'Stranger Things' & 'Somebody Feed Phil' Return
By Arya Roshanian
Michael Peterson & Sophie Brunet’s Relationship Timeline
By Morgan Leigh Davies
Pete Davidson & Kate McKinnon Are Part Of A Reported Major SNL Cast Shakeup
By Brad Witter
Get Even More From Bustle — Sign Up For The Newsletter