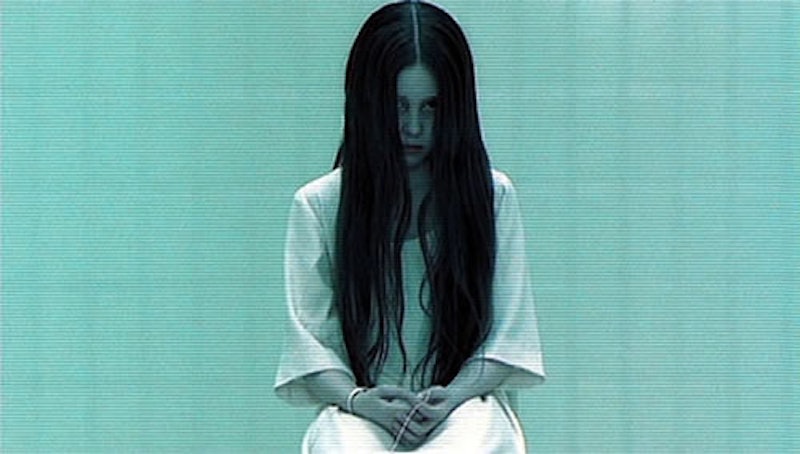 Remember the little girl who crawled out of the TV set in The Ring and into your nightmares for the rest of eternity? Well, she is not so scary anymore. Back in March 2015, Buzzfeed revealed The Ring girl, Daveigh Chase, is grownup and stunning. The 25-year-old actress just celebrated her birthday on July 24, and she could not possibly look anything less like that terrifying child in the cursed VHS tape if she tried. She's traded her dark locks for blonde, ditched the whole inhuman creeping about thing, and embraced a much less traumatic career path.

It seems even before she was the evil child from The Ring, Chase was already avoiding being typecast. Ready to have your mind blown? Chase is the voice of Lilo — yes, as in Lilo & Stitch. See, she didn't just play one of the scariest horror movie characters of all-time! She also delighted you as an adorable little girl with a BFF who was an alien. That is some serious range for a child actor.

Happily, Chase's career didn't stop there. She has been working steadily since The Ring, and chances are you have seen her without having any idea you were looking at the source of your VCR fear. She was a regular on HBO's Big Love as Rhonda, she reprised her role as Samantha Darko in the Donnie Darko sequel (of sorts) S. Darko, and she even entertained kids in a children's show call Betsy's Kindergarten Adventures.

Look! She's totally a normal person, not something that will suck out your soul. The busy actress has two projects coming up including JacobJosefAimee, an intriguing movie about dating in the digital age that co-stars Thomas Decker (Backstrom), and a thriller called American Romance. In the meantime, Chase has been busy celebrating her birthday.

If that photo doesn't give you major #SquadGoals, you must be way better at taking Instagram photos than I am. Chase is refreshingly normal. A quick browse through her Instagram feed reveals she spends her days working, hanging out with friends, and indulging in Taco Bell.

It makes you wonder how many other horror movie villains grew up to be awesome well-rounded adults. Well, most of them probably, but in my head they are all still the scary monsters who made me sleep with the lights on. That's just how I roll. For that reason, it's nice to have visual proof that Chase went from this:

Now maybe you can watch The Ring without the lights on, or at the very least you can see Chase and think, "Hey, that's Lilo!" instead of "OMG, it's The Ring girl!" Baby steps, everyone.