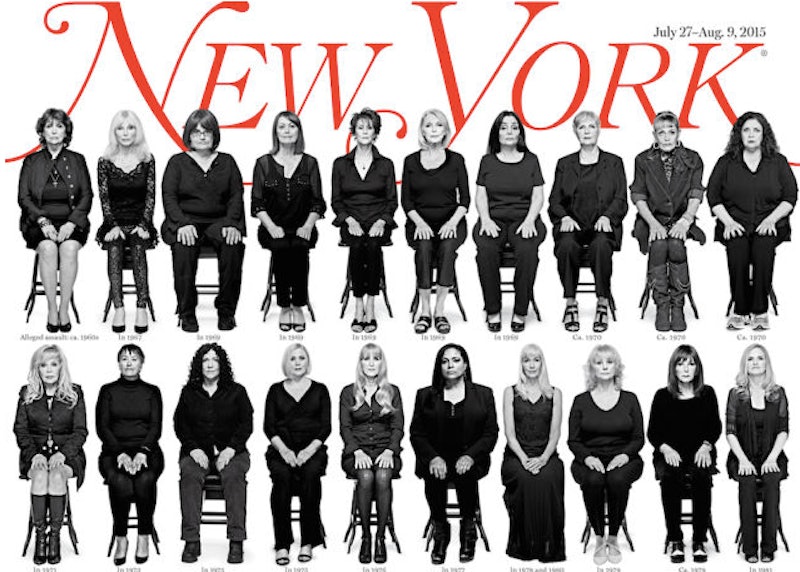 For months now, we've read time and again about how over 40 women have accused comedian Bill Cosby of sexual assault and/or rape. And for months, the image of Cosby himself has been the center and the face of the scandal. But now, New York Magazine has released photos of 35 of Cosby's accusers, along with interviews with each woman. It sends an incredibly important message: This story, and the allegations that comprise it, is theirs, too. It's not just about the man these 35 women have accused of assault.

Since October 2014, when Hannibal Buress shed light back on this scandal by bringing it up during a stand-up set, over 40 women have come forward to accuse Cosby of sexual assault and/or rape. In all that time, the faces of Cosby's accusers have taken a back seat to his own. These women are given a place alongside other accusers, one conglomerate force with the comedian on the other side. This feature and these photos not only gives these women a chance to share their stories in an incredibly brave and powerful way -- it also allows readers to see who the women are. They are not simply 35 women. They are Beverly Johnson and Janice Dickinson. Kaya Thompson and Tamara Green. Patricia Leary Steuer and Linda Kirkpatrick. These are people, and their side of the story must be heard.

In the essay that accompanies the photos, Noreen Malone and Amanda Demme touch on why we need this level of focus on these women now, by taking us through what happened after Cosby settled out of a 2005 lawsuit, in which Andrea Constand accused Cosby of drugging her and assaulting her:

The accusations quickly faded from the public’s memory, if they registered at all. No one wanted to believe the TV dad in a cardigan was capable of such things, and so they didn’t. The National Enquirer had planned to run a big story detailing one of the women’s accounts, but the magazine pulled it when Cosby agreed to give them a two-page exclusive telling his side (essentially that these were instances that had been “misinterpreted”). People ran a story alleging that several of the women had taken money in exchange for their silence, implying that this was nothing more than an elaborate shakedown. Cosby’s career rolled on: In 2014 alone, there was a stand-up special, plans for a new family comedy on NBC, and a high-profile biography by Mark Whitaker that glossed over the accusations.

There is little doubt in my mind that the accusations could fade from anyone's memory at this point, but this photo series, and the stories that accompany the images, are ensuring their staying power.

And while I could write on and on about how important it is for these women to have their chance to be at the forefront of the Cosby story, the truly moving part of New York Magazine's endeavor is the fact that it allows you to hear from these women themselves. Not from me, not from some impassioned people on Twitter, but from the women whose allegations are at the center of this whole thing. And over on New York Mag's Instagram, you will find not only images of these women, but audio of their accounts of the alleged acts of assault. This audio is incredibly difficult to listen to, but then again, that's exactly the point:

In response to the allegations, Cosby's lawyers released this statement in 2014:

When a 2015 report from the Associate Press unveiled documents from a 2005 deposition, in which Cosby admitted to obtaining Quaaludes to use to have sex with women, his lawyers released another statement:

Here's hoping that the magazine's focus on these women can help usher in a new era of understanding that puts just as much weight on an accuser's testimony as it does on the person being accused.