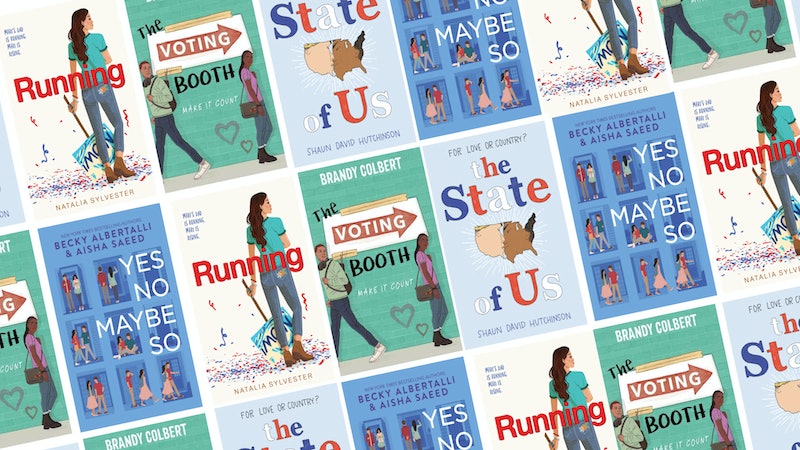 Young adult novels have and always will be political. Starting with SE Hinton’s 1967 The Outsiders — which is considered the first true YA book and is a class warfare tale — to more recent titles like Angie Thomas’ 2017 The Hate U Give — centering on the Black Lives Matter movement — these works have long been unafraid to expose inequality in our society.

But 2020’s collection of political books is different. These titles don’t just focus on the problems in our nation, but elections themselves. From campaigning to canvassing, protests and voter rights, not only are national and local elections spotlighted, but they’re done so with the inclusivity and nuance contemporary teens crave.

Here, Bustle speaks with some of the authors at the helm of these novels about representing marginalized voices, weaving personal narratives into political issues, and why there’s always space for a love story.

As we saw with the students at Marjory Stoneman Douglas High School, who launched March For Our Lives after the February 2018 shooting at their school, sometimes it’s the most personal experiences that urge individuals to political action. Which is the case for many of the protagonists in these election-based novels.

Take Mari, the main character in Natalia Sylvester’s Running (July 14), whose father is running for president. The 15-year-old hasn’t been particularly engaged in her father’s campaign, but after he’s criticized for his weak stance on the environment, she stages a walkout in support of protecting the local water supply from a developer’s pollution. “As much as I'd love to say [Mari] cares about an issue because it's affecting people she doesn't even know, she really only starts to see it when it hits close to home,” Sylvester tells Bustle of Mari’s very relatable political awakening.

In Brandy Colbert’s The Voting Booth (July 7) Marva and Duke are also inspired to fight back after witnessing a fellow black teen get hassled while attempting to vote. “Voting rights have quite an ugly history in the Black American community,” Colbert says. “I wanted to highlight the reality that voter suppression is not just a thing of the past.” Marva and Duke’s mission to curb voter suppression in their community serves as the driving force of the book, and showcases the power of grassroots activism to readers.

It’s precisely these local politics at the heart of co-authors Becky Albertalli and Aisha Saeed’s recently-released Yes No Maybe So. Jewish teen Jamie is working on his cousin’s local election campaign. Maya, a Muslim American girl, finds herself canvassing alongside Jamie. The two begin working together to quash a hateful bill in their state’s House of Representatives. “Local elections get far less press and attention, but they’re a place where volunteers on the ground can have a quantifiable impact. I really believe that’s such a powerful experience for teens who might be feeling disempowered and voiceless,” says Albertalli on her choice to keep the book’s campaign on the state level.

In 2019, Casey McQuiston’s political romance novel, Red, White, and Royal Blue, became a surprise smash hit. The book follows Alex and Henry: the first son of the United States and the prince of England, respectively. The success of McQuiston’s debut has helped popularize a slate of romance-infused political YA books. For McQuiston, the rise in these novels is a no-brainer. “We’re engaged in an incredibly depressing political landscape, so there’s this desire for a counterpoint to all the cynicism. That’s where love stories come in,” she says.

The next of these hybrids is Shaun David Hutchinson’s The State Of Us (June 2), which also has queer romance at its core. Dre is a Mexican-American teen whose Democrat father is running for President. Whereas Dean is a white teen whose Republican mother is also in the Presidential race. While the two have opposing political stances, through a series of frank conversations about their beliefs, the feelings they have for one another begin to transcend party lines. “I wanted to show at least one example where two very different people getting to know each other brought about change,” says Hutchinson. “I wanted to show what could happen if we took a chance.”

For Albertalli and Saeed, romance was also an important component of the politically charged Yes No Maybe So. “Maya and Jamie are passionate new activists grappling with the reality of this fraught cultural moment, but they’re also goofy teens with crushes and we wanted to honor that,” says Albertalli. These protagonists are multidimensional human beings, who are questioning what they believe in, who they love, and what that looks like in 2020.

Gen Z is the most racially and ethnically diverse generation yet. And it was imperative for these authors to have the diversity of their readers reflected in their book’s pages. “It would do a great disservice to readers to center anyone other than teens from marginalized communities,” says Hutchinson. Especially given the political nature of these novels. “While white voters are worried about their right to bear arms, Black voters are worried about their children being murdered by the police.”

Not only is it important to authentically tell the stories of marginalized people for marginalized people, but these honest accounts are vital for those less attuned to understand the real challenges underrepresented groups face. “Representation increases empathy,” Colbert says. “It can also help those who don’t come from marginalized backgrounds understand how they can use their voice, privilege, and influence to help make the world a better place overall.” Which is something the novels address as well. Be it Dean finally opening his eyes to life outside his white, Republican bubble after meeting Dre, or Mari learning about how climate change disproportionately impacts the working class.

This wave of YA novels gives power and voice to teens of color and their realities. From the voter suppression some face at the polls, to the ways hateful bills affect their everyday life, as well as the ways they’re fighting back to provoke real and meaningful change.

YA novels have a rich political history, but until this year, readers didn’t have the chance to peek behind the curtain of the voting booth. To get inside the heads of the children of elected officials, or follow along as their heroine goes canvassing. But as teens are becoming more politically engaged than ever, these novels have adapted to reflect their heightened interest in activism and the government. The goal? To inspire teens to, “make their voices heard. Even if they can’t vote, they have opinions and beliefs that are worth hearing,” says Colbert on the underlying mission behind these new novels. “I don’t want anyone to feel silenced — especially not teens.”