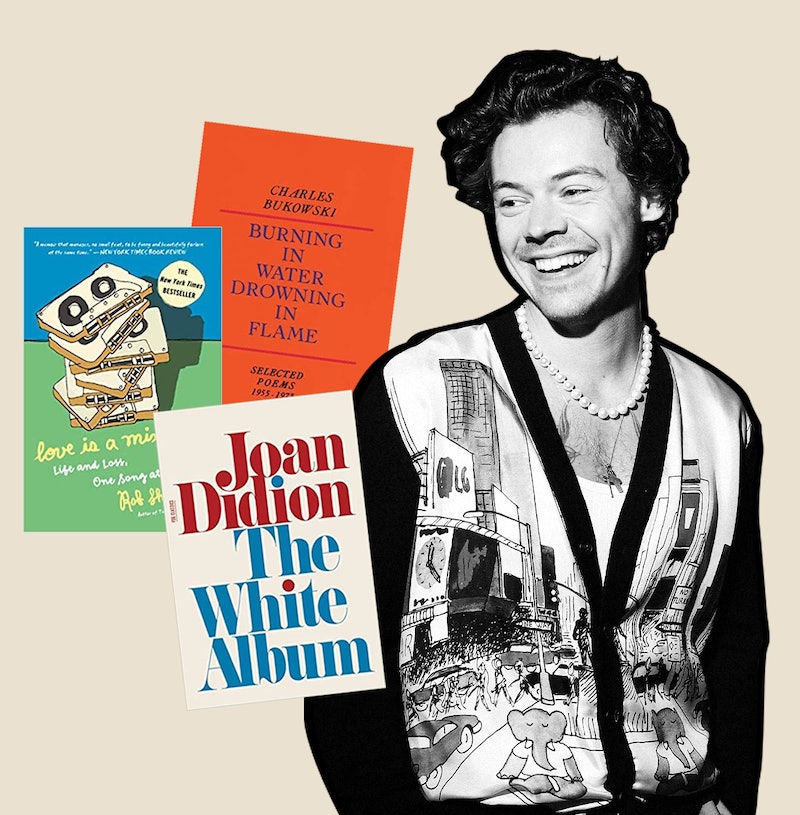 Celebrities are just like us, the saying goes, and in 2019 I found that to be true: Just like me, celebrities were extremely beautiful women performatively reading highbrow literature. Kendall Jenner was photographed poolside reading Literally Show Me A Healthy Person; Emily Ratajkowski couldn’t stop posting about Normal People; Gigi Hadid — presumably mid-existential crisis — walked out of a building holding The Stranger by Camus. But the only performatively literate celebrity I care about is Harry Styles. In the past couple years he has been spotted carrying a book of Sontag out of the gym and buying The Year of Magical Thinking at the Strand. He recently told Rolling Stone that while reading was never really his “thing,” it is now. Reading is Harry’s thing, Harry is my thing, and so I decided to read the books that Harry has read.

There are many obvious reasons for doing this, but what sold me is that Harry finally became a reader because of a woman. As he told Rolling Stone, “I was dating someone who gave me some books; I felt like I had to read them because she’d think I was a dummy if I didn’t read them.” Whoever this woman was, I wanted to be friends with her. I strongly relate to the impulse to give men books and figured, how better to insert myself into Harry’s relationship than by reading some books his lover suggested?

I picked the five books which best embody Harry’s taste: the kind of books that a 16-year-old skateboarder would shoplift, or books that are cultural signifiers for white women who work in media. Reading them took a month, during which I listened to the song “Adore You” three thousand times, came to better appreciate Harry’s influences, and completely changed my opinion of whether Harry’s ex Camille Rowe has good taste in anything.

Book 1: Burning In Water Drowning In Flame by Charles Bukowski

Harry so famously loves Bukowski that a fan once threw a book of Bukowski’s poems onstage during a One Direction concert, so I figured this 1974 collection of his poetry would be as good a book as any to begin my journey with.

I read it in a day, while listening to my “Good Harry Styles” playlist (pretty much all Harry Styles except the song “Fine Line”). Over the course of the month I would listen to the playlist frequently, in order to get into the Harry Styles Zone, a place I already inhabit 24/7. (I am ill.)

This wasn’t my favorite Bukowski. I have no idea which of his books is my favorite, because he has 15,000 and they’re all named Lunatic Drunk Speeding Straight To Hell. Reading Bukowski involves plodding through gratuitous misogyny and descriptions of horse races in order to get to the perfect lines that capture what it is to be alive. Burning In Water was heavier on the plodding and lighter on the summing up of the human condition — but if anything, that made me feel closer to Harry. It’s embarrassing to read this much Bukowski! And yet, Harry’s first album was influenced by Bukowski, and every time I go to Barnes & Noble I walk out with a new collection of Bukowski titled Even My Dog Doesn’t Love Me Anymore.

Ultimately, I am not a misogynist and I don’t think Harry is either, but we both can’t stop reading Bukowski.

'Burning in Water Drowning in Flame' by Charles Bukowski
Amazon

Book 2: Love Is a Mix Tape by Rob Sheffield

Two important facts to note here. One: There is an incredibly sensual photo of Harry “reading” Love Is a Mixtape, shirtless. Two: when Harry and Timothée Chalamet interviewed each other for i-D, they asked each other to pick one book to read for the rest of their lives. Harry, a flagrant cheater, picked both Norwegian Wood and this book, about which he told Timo, “I would suggest you read if you haven’t read it already. It’s really beautiful.”

Harry is right! This book is lovely. Had I the chance, I, too, would recommend it to Timothée Chalamet. It’s a memoir by Rolling Stone writer Rob Sheffield about his wife, who died very suddenly and very young. This is the only book on the list that is not already famous, and is the only book I probably never would have read if not for Harry. As such, it’s the book that I feel I learned the most about him from. Like, OK, great, Harry loves Joan Didion. Congrats on your favorite food being pepperoni pizza and your favorite TV show being Game of Thrones, until the last season. What is more interesting is when someone loudly champions a book that no one has heard of. It turns out that Harry’s passionate about a small, personal story of profound love, grief, and unmitigated appreciation of the song “MMMBop.” I’m genuinely glad to know that’s what Harry finds “really beautiful.”

'Love Is a Mix Tape: Life and Loss, One Song at a Time' by Rob Sheffield
Amazon

Harry loves this book. He told Rolling Stone that Murakami is one of his favorite writers, and described Norwegian Wood as “the first book, maybe ever, where all I wanted to do all day was read this.” Certainly, reading this book, I would learn something essential about Harry.

This was my second foray into Murakami — I read 1Q84 last year — so I knew what to expect. The writing is very male gazey. In 1Q84, Murakami describes the exact size of every single female character’s boobs. Norwegian Wood is marginally less interested in describing breasts, but it does feature a lot of women magically orgasming from penetrative sex alone.

Norwegian Wood is about a lot of things, but on the very simplest level it is about a young man in Tokyo whose best friend has committed suicide, and who is falling in love with two women. And even though I am a notorious sucker for the genre of novels best described as “horny,” Norwegian Wood did not do much for me and I ended up learning nothing about Harry. Director Paul Schrader once told Ethan Hawke that a good movie starts when you walk out of the theater — the movie rings a bell and the bell vibrates inside you. I did enjoy reading this book. I did cry. I did underline this line: “Despite your best efforts, people are going to be hurt when it’s time for them to be hurt.” But nothing vibrated in me afterwards.

The fact that Norwegian Wood is so important to Harry makes me feel like maybe I never will understand this rich, famous man who I have never met and will literally never meet. But during the month I spent reading these books, Murakami published a new short story in the New Yorker and I imagined somewhere Harry was out there reading it, too.

I have no proof Harry has ever read this book. What I know is that Harry’s ex Camille Rowe, the bookish woman who I believe turned him onto the concept of reading, told ELLE in 2017 that In Watermelon Sugar was one of her favorite books. I also know that one of the songs on Harry’s new album is called “Watermelon Sugar.” Essentially, Harry wrote a song about how much he loves eating pussy, and named it after his ex-girlfriend’s favorite book. The bravura! (Harry has also said that In Watermelon Sugar was “in the room” in Nashville when Harry wrote this song in 2017, but that story is boring, and I like my theory better.)

I am happy to announce that the song has nothing to do with the book. This book… sucks? In my opinion, the book is just a collection of words that have nothing to do with each other. It’s about a post-apocalyptic society (??) in which everything is made out of watermelon sugar (????). That’s the best synopsis I can give you. It is certainly not a book about oral sex. Maybe In Watermelon Sugar would have been better if I read it while on hallucinogens, which I say with love, because I love hallucinogens.

Thank God Harry has never been quoted saying he enjoyed this book, because I do not know how I would incorporate that into my understanding of Harry, music as an idea, or the universe.

Didion’s famous essay collection is the second book on this list with a title that references the Beatles. Maybe I will name my books something related to One Direction going forward. Through the Dark. Drag Me Down. Made in the AM (Deluxe Edition): Essays.

Harry likes Joan Didion. He’s been spotted backstage reading her books, and he recently said that the Gucci fragrance he’s the face of “smells like what I imagine Joan Didion’s house to smell like.”

But there is nothing to be learned from the fact that someone likes Joan Didion other than the fact that they want to be seen as a person who loves Joan Didion. (During the week I read The White Album, I certainly did my fair share of glamorously, pensively, performatively reading it on the sidewalk while waiting for friends outside restaurants.) Didion is a metonym for being a certain kind of reader and thinker and artist, the kind of person who loves books but hates people who have tote bags that say “I love books.” What Harry’s professed love of Didion tells me is that Harry has artistic aspirations above pop stardom.

It’s almost redundant, to that effect, to even read this book, but I did anyway. The title essay, about the tail end of the ‘60s, obviously slapped. The rest was okay, and I wondered idly several times if Harry had been as bored reading this book as I was.

I don’t know if I expected I’d gain a much deeper understanding of Harry’s music from reading these books. The only change has been I now think of “From The Dining Table” as the name of a Bukowski poem written by a very hot, rich person. If I expected to completely revolutionize my understanding of Harry, that didn’t happen either. I wonder if there was a part of me expecting to find out Harry was like one of the boys in my college English program, the ones who dressed well and wrote for the lit mag and never let me get a word in during discussion in our David Foster Wallace class. I am now almost positive that he isn’t, thankfully! But mostly, I’m just grateful for the recs. Even In Watermelon Sugar. Because now I never have to read In Watermelon Sugar ever again.