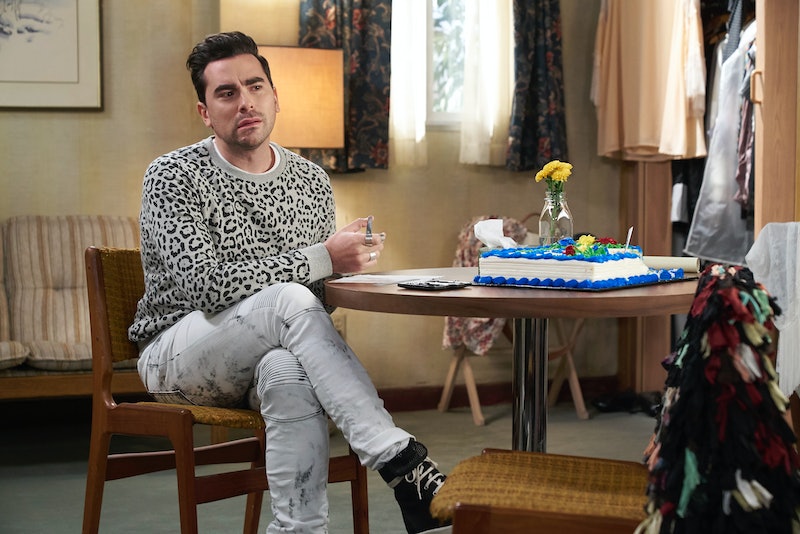 When Schitt's Creek first premiered, Daniel Levy's character David Rose was a cold and uncaring rich kid who thought only of himself. He really softened throughout the show's six seasons, becoming someone genuinely worth rooting for. But there are some aspects about David that will never change, one of which being his impeccable — and highly unusual — fashion choices.

Whether he's rocking wild patterns or a particularly eye-catching sweater, David is always making bold wardrobe choices, though we all know where he gets it from (looking at you, Moira, and those unforgettable pajamas!). Regardless, David's outfits have now become as iconic as his deadpan humor and sarcastic one-liners. Each week fans look forward to seeing what new ensemble he will bedazzle our eyes with and pretty much every time he never disappoints.

So in honor of his legendary fashion choices, let's take a look back at some of his best looks throughout the series and bow down to his show-stopping attire.

When He Rocked This Cozy Masterpiece

From going out to staying in to standing in front of a humungous deer painting, this top just goes with everything.

When He Tackled This Wild Pattern

Not everyone can pull something like this off, but you better believe David Rose can.

When Duct Tape Was The New Black

If loving this is wrong, then let's all just agree to never want to be right. (Also, he's not wearing actual duct tape, but man does it look like he is.)

When He Got In Touch With His Inner Leopard

When He Made Our Hearts Melt

Lest you forget, this was his outfit of choice when he belted out Tina Turner's "Simply the Best" in an attempt to serenade Patrick. Much like the top of his jacket, he was a true star that night.

When His Heart Was The One Melting

Prior to David's performance, Patrick was the one to originally sing a slower version of "Simply the Best" to David during their store's karaoke night. It was enough to set David's heart (and shirt) ablaze.

When His Sweater Made For Great Reading Material

Who needs to read books when your tops can do the work for you?

When His Shirt Perfectly Matched His Personality

When He Was A Human Inkblot Test

All we see is greatness in its truest form.

Anyone else also really love the fact that David Rose is wearing a rosey apron? Very on-brand. Speaking of which...

When His Love Of Florals Knew No Bounds

When His Sweater Matched His Heartbeat

Does this or does this not look like a heartbeat monitor?

When His Cardigan Game Was On Point

Palm trees make for the perfect accent to any ensemble.

When He Went Apartment Hunting

If only the decor looked as good as he did.

When His Sweatshirt Was More Than Just A Sweatshirt

And just in case you thought it couldn't get any better...

He Added A Wig To Go With It

Needless to say, David Rose is the epitome of fashion and we are not worthy.