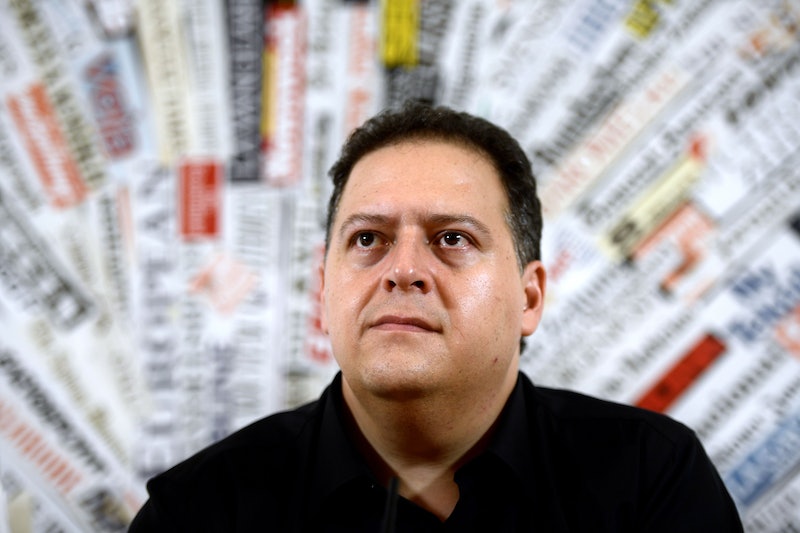 Narcos' first two seasons chronicled Pablo Escobar's rise from fledgling dealer to notorious drug lord, but also provided glimpses of his life at home, as a father and as a husband. His relationship with his family was especially prominent in Season 2, which followed his final days before being killed in a police shootout. However, in real life, Escobar's kids have taken issue with the way the Netflix show has portrayed their father. Or at least, his son has. His daughter has stayed largely out of the spotlight.

Escobar's children Sebastián Marroquín (neé Juan Pablo Escobar) and Manuela Escobar were born in 1977 and 1984, respectively. Articles about Manuela are dated and scarce, usually regarding her inheritance or a story that her father once allegedly burned $2 million because she was cold, according to her brother. Per Time magazine, after Pablo's death in 1993, Manuela, her brother, and her mother traveled to Ecuador, Peru, Brazil, South Africa and Mozambique before ultimately seeking refuge in Argentina. In 1999, El Tiempo reported that Manuela was living under an assumed name, and she's kept her life private since then.

Escobar's son, on the other hand, has remained in the public eye. After settling in Argentina, Marroquín studied architecture at the University of Palermo in Buenos Aires. He told The Architect’s Newspaper in 2017 that he chose the profession because his grandfather on his mother’s side was a woodworker, and his mother had been an interior designer. While he was waiting for her to be released from jail in Argentina, architecture became his escape. “Architecture saved my life because it gave me the possibility to believe that even when something is demolished new things can come out of that,” Marroquín told The Architect’s Newspaper.

Marroquín, who is now in his 40s, changed his name as an adult to avoid the notoriety and legacy that his father’s name carried with it. He picked Sebastián Marroquín from a phone book, saying on the Norwegian-Sewdish talk show Skavlan that airlines refused to sell him tickets under his given name.

Over the years, Marroquín has also been vocal about his father. In 2009, Marroquín was the focus of Argentine director Nicolás Entel’s documentary Sins of My Father, which chronicled Marroquín as he returned to Colombia and apologized to the children of politicians Escobar had killed, denouncing his father’s violence. Among the people Marroquín visited was the son of Colombian Justice Minister Rodrigo Lara, who was assassinated in 1984 under the orders of Escobar due to his work prosecuting cocaine traffickers, many of whom belonged to Escobar’s Medellín Cartel. Lara’s son, who’s also named Rodrigo Lara and was only 8 at the time of his father’s death, was initially skeptical of meeting with Marroquín. But after Marroquín wrote him an impassioned letter, he agreed to meet, and the two ultimately shared an emotional embrace.

"Colombia is a nation in which cycles of violence can continue from generation to generation," Entel told Time magazine of the film in 2009. "If you do something to me, my family members will look for your family members ... So [the film] has the value of saying, 'It stops here. We are not going to inherit our parents' hatred.'"

Marroquín expressed a similar sentiment during an interview with the UK publication Latino Life, explaining that he participated in the documentary after turning down many projects that he felt carried "the opposite message" of what he wanted to send. He said:

"I want the violence to stop, not just for me but for Colombia … There is also the necessity to ask for forgiveness for my father's actions. They aren't mine but I have to say to you that society has persecuted and punished us as if we were Pablo Escobar. The film allows a minute's silence to hear our voices and to say 'this is our story, this is how we live, please understand that to be someone's son doesn't mean they are also an accomplice … The documentary is a way for us to send this message to society that they separate us as individuals and not as cartel members. We are members of the boss' family, but we aren't the cartel.”

In 2014, Marroquín released the book, Pablo Escobar: My Father, under the name Juan Pablo Escobar. According to the Latin Times, proceeds from the book were donated to various Colombian charity projects and Marroquín was quoted about his work saying, "It's not about trying to wash away guilt, but contributing to the well-being of [Colombia] from whatever place I can."

In 2016, Marroquín also spoke out against Narcos, detailing 28 things he claims the show got wrong in a Facebook post. It's written in Spanish, but according to The Telegraph, includes claims about "trivial matters of which local sports team Escobar supported in Medellín, to more substantial [issues], including denying that Escobar attacked rival drug lord Gilberto Rodriquez's daughter at her wedding" or any of the Rodriguezes at the time. (Bustle reached out to Netflix for comment on Marroquín's claims, but did not receive a response.)

In June 2018, Marroquín and his mother, Victoria Henao, were charged in connection to a money laundering case in Argentina. Reuters reported at the time that the two would not be held while the case proceeds, but that some of their assets had been frozen. There don't appear to have been any updates since then.

More like this
Where Is The Bling Ring’s Rachel Lee Now?
By Arya Roshanian
Lori Vallow’s Son Was Arrested For Sexual Assault Days Before 'Sins Of Our Mother' Premiered
By Brad Witter
Lori Vallow Faces The Death Penalty For Allegedly Murdering 2 Of Her Children
By Brad Witter
Devi Is Going To Meet A “Smoldering Bad Boy” In ‘Never Have I Ever’ Season 4
By Jack Irvin and Gabrielle Bondi
Get Even More From Bustle — Sign Up For The Newsletter

This article was originally published on Sep. 27, 2016