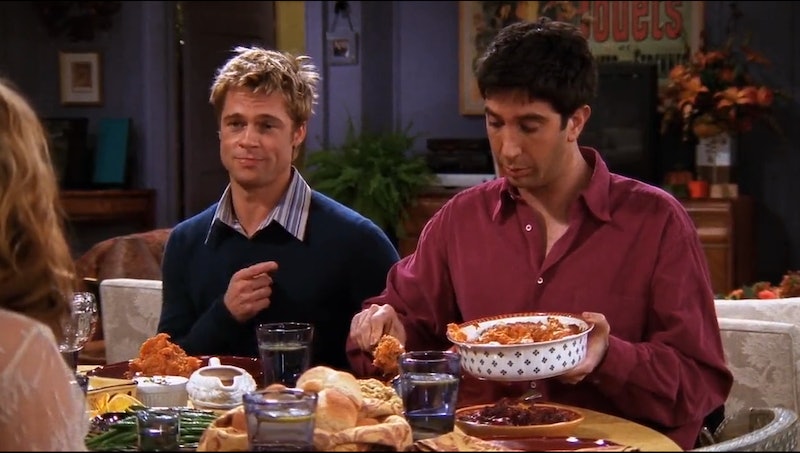 With a total of 10 years on the air and a reputation as one of TV's most-watched sitcoms, Friends racked up an impressive number of high-profile guest stars in its time. But considering that the show aired 236 episodes, it’s hard to remember every celebrity who popped up throughout its 10 seasons. So, we plumbed the depths of IMDb and found the top 73 appearances — from surprise one-offs (Julia Roberts as "Susie Underpants") to beloved season-spanners (hello, Tom Selleck's glorious mustache), celebrity cameos (Jean-Claude "The Muscles from Brussels" Van Damme), and plenty of "before they were famous" appearances (Rebecca Romijn's first-ever credit, Parenthood's Mae Whitman as a kid, a pre-Sex and the City Kristin Davis — the list goes on).

It's enough to make you think that everyone in Hollywood has a six-degrees-of-Kevin-Bacon-style connection to the show. Like, what do you make of the fact that both the Dean from Community and the principal from Glee had a few lines on Friends before hitting it big? Or that Jane "Sue Sylvester" Lynch appeared along with most of her Christopher Guest mockumentary co-stars, Bob Balaban, Michael McKean, Jennifer Coolidge, Fred Willard, and Harry Shearer?

Read on for a full list of the celebs you probably completely forgot were on the show.

... as Ryan, Phoebe's onetime Navy paramour to whom she gives Chicken Pox.

... as Roy, the stripper at Phoebe's bachelorette party.

... as Jessica Lockhart, Joey's Days of Our Lives costar.

... as "The Gentleman on the Plane" who has a tiff with Rachel.

... as Jamie Buchman — a crossover of her character on the sitcom Mad About You — who mistakes Phoebe for her twin sister, Ursula. (Fun fact: Lisa Kudrow also appeared on Mad About You as Ursula.)

... as Amy Green, Rachel's other sister.

... as Mike, Phoebe's blind date and — ultimately — her husband.

... as Erica, the mother of Chandler and Monica's adopted twins.

... as Will Colbert, former president of the I Hate Rachel Club (which was funny because he was married to Jennifer Aniston at the time).

... as Steve, a restauranteur who gets stoned before sampling Monica's cooking — then eight seasons later, goes on a blind date with Rachel.

("The One with the Ultimate Fighting Champion," S3E24)

... as Erika Ford, an over-the-top fan of Joey's Days of Our Lives character, "Dr. Drake Ramoray."

... as Paul Stevents, the father of the student Ross dates.

... as Ellen, a real estate agent showing the house next door to Monica and Chandler's.

... as Earl, a suicidal office manager whom Phoebe tries to help.

... as Mackenzie, the girl whose family is moving out of Monica and Chandler's new house.

... as Sandy, a nanny Ross and Rachel consider hiring for their daughter.

... as the clerk who Phoebe visits as she tries to have her name changed to "Princess Consuela Bananahammock."

... as Leonard Hayes, the director of a play Joey Is in.

... as Dr. Benjamin Hobart, the head of Ross's grant committee who used to date his girlfriend, Charlie.

... as herself, sharing a photo-op with Joey.

... as Sarah Tuttle, the Girl Scout — I mean, "Brown Bird" — whose leg Ross breaks, and whose cookie route he subsequently takes up.

... as a doctor who helps Joey pass his kidney stones.

... as a "Nervous Male Passenger," who overhears Rachel's phone conversation about the plane's "broken left phalange."

... as himself, filming a movie in New York that costars Ross' soon-to-be monkey, Marcel.

... as Felicity, Ross's fiancée's bridesmaid who hooks up with Joey.

... as Zack, a colleague of Chandler's who Chandler and Monica consider as a possible sperm donor.

... as Mindy, Rachel's ex-fiancé's new partner (who, in later episodes, was replaced by a different actress).

... as herself — and an entry on Ross' list of celebrities he's allowed to cheat with.

... as "Bitter Woman on Stage," the star of a one-woman show Chandler attends.

... as Cassie Geller, Ross and Monica's cousin, who both Chandler and Phoebe like.

... as Leon Rastatter, creator of "Mockolate."

... as Dr. Baldharar, a man who wants to buy Ross' monkey for his animal fighting ring.

... as Dean Lipson, administrator of the San Diego Zoo, where Ross's monkey ends up.

... as Kristen, a woman who dates both Ross and Joey.

... as Bob, Chandler's co-worker who can't remember his name.

... as the director of a movie in which Joey has a full-frontal nude scene.

... as Kyle, aka "Hums While He Pees," a friend of Ross and Chandler's who dates Phoebe.

("The One with the Engagement Picture," S7E5)

... as Brenda, a maid Monica suspects of stealing.

...as himself, when Joey appears on Pyramid.

... as Lydia, a woman who gives birth with Joey's help.

... as himself, aka real-life Days of Our Lives star and Joey's guest at a cast party.

This article was originally published on May 6, 2014