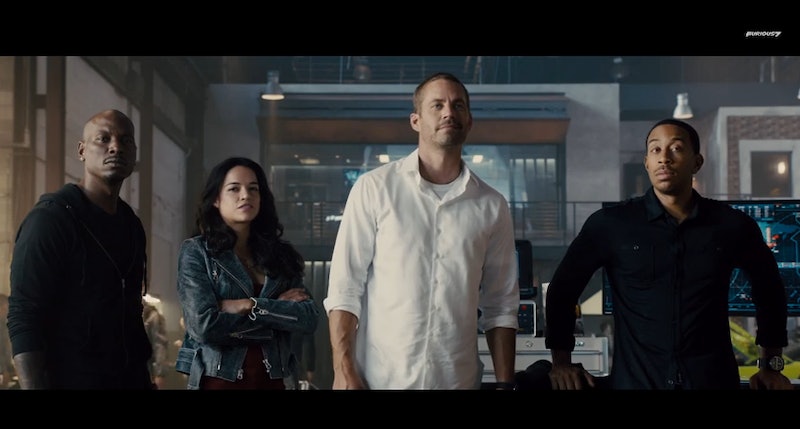 Mind-blowing and insane are the two words that come to mind after viewing the latest Furious 7 trailer. The nearly three-minute clip comes a few days after the first full trailer debuted during the Super Bowl and, as all fans of the franchise have come to expect, the stunts are nothing short of amazing. After six rounds of crazy car chases, gravity-defying feats and international pursuits of countless bad guys, it seems like the Fast & Furious producers somehow managed to save all of their most outrageous ideas for the latest film.

In order to keep the longstanding franchise fresh, they've given it a quick makeover by adding some new faces. Furious 7 features appearances by Kurt Russell along with Jason Statham and his perpetually furrowed brow as the film's villain Deckard Shaw, who sets out to avenge the death of his brother. Fortunately, Russell and Statham both seem to fit right in with the original cast members, which includes Vin Diesel, Michelle Rodriguez, and the late Paul Walker.

Basically, if the stunts and the action we've seen is the trailer are this good, then the film is guaranteed to be crazy good. Furious 7 debuts in theaters on April 3, 2015.

Here are the 6 best moments from the Furious 7 trailer as proof that this movie is not one to be missed:

It's bittersweet seeing Walker onscreen, but fans of the franchise will be glad the filmmakers found ways to complete Walker's scenes after his sudden death last year to give his character a fitting goodbye.

Driving a car backwards out of a plane then safely parachuting it to the ground? Insane.

Watching Brian O'Conner leap from a falling bus to latch on to the tail end of a car is easily one of the trailer's highlights.

The Crew Heads to Dubai

Furious 7's car-flying techniques haven't quite matched The Jetsons', but this scene of Dominic Toretto driving a car out of the window of one skyscraper into the another building is super intense.

Watch the full Furious 7 trailer below: