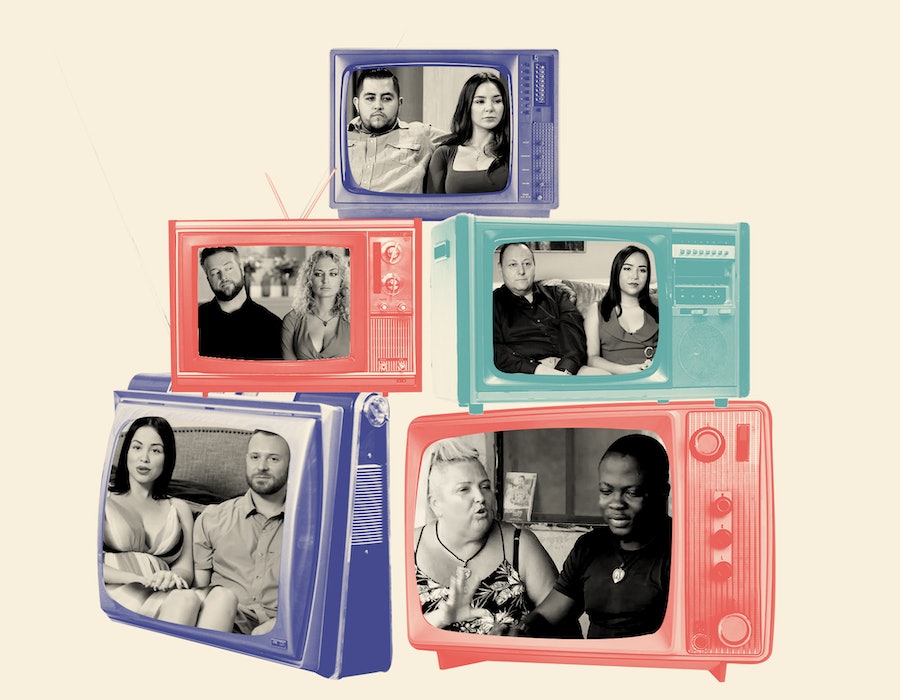 The world of 90 Day Fiancé is expansive and ever-growing, with new spin-offs being added each year. While a lot of beloved pairs share glimpses into their post-90 Day lives on shows like Happily Ever After, Pillow Talk, and The Single Life, not everyone has time to watch every series in the 90 Day universe, which can make it difficult to get the latest updates on the cast. Plus, a lot of couples from the TLC series wind up leaving reality TV behind after their original season run.

To help you keep up with all of your favorite — and least favorite — couples from 90 Day Fiancé, we sifted through countless tabloid interviews, Instagram accounts, and more to find out where the stars are now. We’re happy to say that most couples are still happily married, with more than a few now raising children together. But not every 90 Day romance has a happy ending, and we untangled all the drama, scandals, and splits that occurred since the cameras stopped rolling. Keep reading to find out where all the 90 Day Fiancé stars are now.

Russ and Paola are still together, having since appeared on four seasons of Happily Ever After. The couple welcomed their first child, Axel, in 2019.

Aya and Louis are married and have two children together. Sons Giovanni and Stefano were born in 2018 and 2020, respectively.

Alan and Kirylam welcomed their first child, Liam, in 2017, and are currently expecting a second child together.

The couple divorced in 2016 after Chelsea came out as queer. Now, Yamir is pursuing his music career in Chicago while Chelsea manages a medicinal marijuana dispensary in Colorado.

Mohamed left Danielle at the end of 90 Day Fiance’s second season. The messy split, in which Danielle tried to get Mohamed deported, was documented on Happily Ever After. They officially divorced in 2017, and the couple came face to face again for the first time on The Single Life.

Justin and Evelin, who knew each other only seven days before getting engaged, are still together. They welcomed their first son, Nathan, in 2020.

Brett and Daya married without ever getting Brett’s mom’s blessing. Now, they’re parents to daughter Isabelle, who was born in 2017.

In 2018, Jason was charged with domestic battery and the couple divorced later that year. Cássia recently graduated from the University of South Florida and married an Italian personal trainer in 2020.

After the season aired, Nikki, 19, and Mark, 58, attempted to sue TLC for how they were portrayed on the show, but the case was tossed out in 2017. In the years since, both have remained quiet on social media and their current status is unknown. Fans continue to leave comments on Nikki’s inactive Instagram account, hoping for an update.

After marrying, Loren and Alexei appeared on two seasons of Happily Ever After and have become Pillow Talk favorites. The couple welcomed their first child, Shai, in 2020, and announced in March 2021 that they’re expecting baby number two.

Noon and Kyle are married and living in Portland, Oregon, where they share two cats.

Melanie and Devar went on to appear on a season of Happily Ever After, which chronicled some rough spots in their marriage. However, the couple is still together, raising their daughter Avah, who was born in 2017.

Fernando hasn’t shared any updates about Carolina on his Twitter account since 2019, but according to Women’s Health, the couple was still together as of 2020.

After Aleksandra converted to Mormonism, she and Josh wed in 2015. The following year they welcomed their daughter, Kaya, and in 2019 Aleksandra gave birth to a son, JJ. They currently live in New Orleans, where Josh is a med student.

After appearing on two seasons of Happily Ever After, Jorge went to jail in 2018 for marijuana possession with intention to sell. Months before Jorge’s release in 2019, he announced the couple’s separation, claiming his prison weight loss led to the split. Jorge officially filed for divorce in August 2020. Three months later, Jorge announced he was expecting his first child with his new girlfriend. Anfisa is now a personal trainer, fitness influencer, and bodybuilder, while Jorge has moved into streetwear fashion, collaborating with Kilos to Paris on a new line.

Though Nicole and Azan starred in two seasons of 90 Day Fiancé and two of Happily Ever After, none of these appearances saw the couple get married. They were still together as of fall 2020, but earlier this year Nicole deleted photos of Azan from her Instagram account, fueling speculation of a breakup. Nicole is staying busy though, working as a Twitch streamer full-time.

Despite the many lies Olulowo told — including that he was a widower and a Nigerian prince — Narkyia wound up forgiving him and the couple married after filming 90 Day. Lowo is now pursuing a career in music and Narkyia gave birth to their first child, daughter Nifemi, in 2020.

Matt and Alla are still married and welcomed their first child together, Emmalyn, in 2020.

Chantel and Pedro have documented their marriage — and ongoing issues with their families — on three seasons of Happily Ever After and two seasons of their own spin-off, The Family Chantel.

Since marrying, Elizabeth and Andrei have starred in two seasons of Happily Ever After and are Pillow Talk regulars. The couple welcomed their first child, Eleanor, in 2019.

The couple is still together and living in Los Angeles. David now works in real estate and Evelyn models. She also made it to the Top 14 on American Idol Season 17.

In 2018, six months after they secretly married, Molly filed for divorce. Five months later, Luis remarried. Now, Molly is running her lingerie line and appearing on The Single Life.

David and Annie became one of the 90 Day franchise’s most beloved couples thanks to their appearances on Happily Ever After and Pillow Talk. David currently teaches English part-time and Annie started a Thai catering company. Annie also shows off her cooking skills on the YouTube spin-off Spice It Up with David and Annie.

Ashley filed for divorce twice in 2019, but the couple reconciled each time. They separated again in 2020 and were officially divorced in 2021. Ashley has since launched a lipstick line and works as an influencer. Jay continues to work as a tattoo artist and has a new girlfriend, whom he previously dated during one of his separations from Ashley.

A few months after Colt and Larissa wed, Larissa was arrested on charges of domestic battery. The couple divorced, and Colt documented his courtship with his new Brazilian girlfriend Jess on Happily Ever After. After his relationship with Jess ended, Colt got engaged to Vanessa, whom Colt had cheated on Jess with. Larissa is seemingly engaged to her boyfriend Eric.

Seven months after marrying, the 19-year-old Fernanda and 32-year-old Jonathan separated. Their divorce was finalized in 2020. Jonathan is still working as a realtor and is expecting a child with his new fiancée. Fernanda is searching for love on The Single Life, working as a model, and recently launched her own podcast.

Kalani and Asuelu are still together, despite the issues they faced during the latest season of Happily Ever After. The couple, who share sons Oliver and Kennedy, said in February 2021 that they were working on their marriage in the hopes of saving it.

In 2019, the police were called to Eric and Leida’s home to investigate accusations of domestic violence. That same year, Leida was granted a four-year restraining order against Eric’s daughter Alari Stark (formerly Tasha Rosenbrook), which she later dropped. Despite these incidents, the couple is still together. Leida now runs a YouTube channel and does gamer cosplay.

Steven and Olga, who share son Richie, announced their split in October 2020. The pair did celebrate Christmas together, prompting speculation that they may have reconciled. Olga now works as a photographer, while Steven is training to be a yoga teacher.

Emily and Sasha are happily married, and Sasha was recently approved for permanent residency.

The beekeepers are still going strong and improving their communication skills by learning each other’s native languages. Anna and Mursel also run a company together and have announced plans to have children via a surrogate.

Michael and Juliana, who have a 20-year age gap, remain happily married. They’re even living with Michael’s ex-wife Sarah and her husband during the pandemic as a blended family.

By the end of the latest season of Happily Ever After, Tania and Syngin’s marriage seemed to be at a breaking point. However, the couple is still together. Syngin has since gotten a job as a server and Tania is continuing her witch training.

Robert and Anny welcomed their first child, Brenda, in July 2020. The couple also remain regulars in the 90 Day franchise, appearing on Pillow Talk, What Now, and Self-Quarantined.

After appearing on two seasons of Before the 90 Days, Angela and Michael starred in the flagship series’ seventh season. However, the couple didn’t marry until the fifth season of Happily Ever After. While waiting for Michael to move to the U.S., Angela recently underwent dramatic weight loss surgeries.

Blake and Jasmin are married and recently appeared together on Love Games. Blake continues to pursue his music career while Jasmine keeps fans regularly updated on her life (and fashion) on Instagram.

After Natalie gave Mike back her engagement ring in Season 7, the couple returned for Season 8 of 90 Day Fiancé, which saw them eventually reconcile. But on the day of the wedding and only three days before Natalie’s visa expired, Mike broke things off. They did reconcile and marry, but Uncle Beau confirmed they had split in March 2021.

Amira and Andrew broke up during Season 8 when she chose not to get on the plane to the U.S. Since the show began airing, Amira has called out the racist bullying she received from Andrew’s mother and family members, reposted Instagram Stories calling Andrew toxic, and shared love for fans’ support. There are now rumors that she has a new boyfriend.

Brandon and Julia are still together, posting cute snaps on Instagram often. Julia recently shared that she plans to pursue a career as a designer.

Jovi and Yara appear to still be married. They’re raising their first child together, and the always well-dressed Yara has opened up an online fashion boutique.

The couple, who first appeared on Before the 90 Days, is married and remain very lovey-dovey on Instagram, where Rebecca also posts a lot of sponsored content.

Stephanie and Ryan split early in the season after Ryan sexually assaulted her, having lied about putting on a condom when they had sex. Afterwards, Stephanie picked things up with Ryan’s cousin Harris. However, Stephanie and Harris no longer seem to be together. Earlier this year it was reported that she may have a new American boyfriend.

Tarik and Hazel are happily married, posting about each other regularly on Instagram. They haven’t shared any updates on their search to find a girlfriend, but Hazel is working on her own lipstick line.