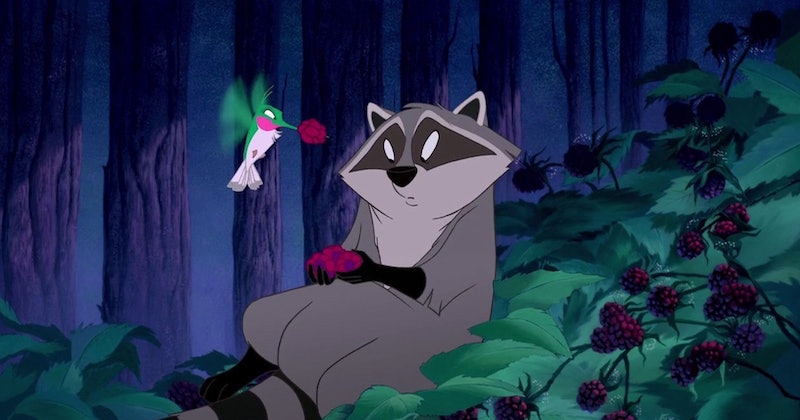 This week marks the 20th anniversary of Disney’s Pocahontas, and while the real story of Pocahontas played out differently than the Disney version, we still appreciate the beautiful love story between our Disney protagonist and John Smith — at least in the movie they made her 18, instead of 12 like she actually was in real life. The movie was released in 1995 and while it wasn’t the most popular of the Disney movies to date, Pocahontas is the original badass princess. Not to mention “Colors of The Wind” is the best Disney song ever.

Even though we love Pocahontas, a lot of credit needs to go to Meeko and Flit because without Pocahontas’ two sidekicks in the movie, it would have been a tad bit boring. I'm here to honor all the sidekicks that Disney has given us over many, many years. When I started to put this list together, I realized that there are tons and tons of sidekicks. So in order to keep my sanity during this, I have limited it to Disney animated features only. Meaning you will not see the Pixar movies on this list. I also decided to save the villainous sidekicks for another time and place (because The Lion King hyenas and Iago are perfect in a very different way).

So here we go, 35 Disney sidekicks ranked by awesomeness.

Cleaning up after several dudes with extreme characteristics is not my idea of fun.

This guy is always super stressed and is never on time. You have a watch. Use it, bro.

In honor of Channing Tatum, who recently said he’s a big fan of the Broom from Fantasia, we had to add him. That broom knows how to clean things pretty well.

32. The Gargoyles — The Hunchback of Notre Dame

Victor, Hugo, and Laverne were Quasimodo’s friends and stone statues, because when you’re kind of a shut-in, you talk to statues. That’s a fact. They are funny though, points for that.

Like in any Sherlock Holmes remakes, the Watson character is super important and a crucial sidekick in the story, even when it’s remade with mice.

Okay, Zazu was kind of annoying, but he was just trying to follow the rules and do the right things. Props to you Zazu!

Any cat that can help 98 puppies escape Cruella deserves a metal. Tibbs is very underrated if you ask me. He’s a hero.

He hands down wins the contest for cutest sidekick, but Thumper is everything that is adorable and right in the world. I’m pretty sure Thumper taught every single one of us that if you can’t say something nice, don’t say it at all. Dear internet trolls, take note.

He can’t talk, but he’s a reindeer that acts like a dog. That’s the dream right?

If you’re going to be raised by apes, you better make sure you have a best friend like Terk.

I wasn’t always a huge fan of Tinkerbell, but I know most people in the world are fans. She was always pretty jealous of Wendy, which is crazy because she’s a fairy. Take advantage of those magical powers you got going on.

When Dumbo need a friend Timothy Q. Mouse was there. Also, it’s a mouse wearing a really cool outfit.

Even though Kuzco is a spoiled brat, Pacha is still an awesome dude. That’s just the type of sidekick Pacha is.

22. Archimedes — Sword In The Stone

Because every film should have a wise owl.

Alright so Piglet has a bit of neurosis, but Piglet is still kind and sweet and the best friend to Pooh. He’s just nervous…all the time.

I consider Venellope to be Ralph’s sidekick and considering she turns out to be a queen at the end, she is definitely someone you want on your side. Bonus: she lives in a world made out of candy.

Everyone should have a pet raccoon and hummingbird by their side.

Since Oliver and Dodger were considered the main characters, I’ve decided to group the gang together. Personally I think Tito really deserves to be higher, but as a group of misfit dogs, they are solid. They always have Oliver’s back too.

Probably the most important character in Robin Hood. Robin would be no where without Little John.

All I’m saying is that it would be pretty sweet if a cricket wearing a top hat and carried an umbrella could give me some solid life advice.

Because he’s a freaking chameleon and so cute!

He’s a solid bear friend. Everyone needs one. Plus he’s not super responsible, something most of us can relate to.

13. Louis — The Princess and The Frog

He’s an alligator that plays the trumpet. Self-explanatory.

Also pretty self-explanatory, but if you don’t want a fly horse that was made by Zeus out of clouds, well then I don’t know what to tell you.

Sebastian just wanted Ariel to do the right thing. Without him though we wouldn’t have "Under the Sea" or "Kiss the Girl," which is super important.

I was always more fond of Gus because he was tiny, fat and just wanted to eat all the time. We had so much in common, but these two were pretty much the essence of Cinderella.

No one can hate a talking snowman with his own flurry. Also, he will melt to save your life because that’s the type of snowman he is.

He’s a giant inflatable nurse that acts like a drunk person when his batteries are low. He’s hysterical, but also smart and protects you at all costs.

Maximus is hands down the best non-speaking sidekick in the Disney realm. He doesn't even need to speak to get his point across because he is a badass. He’s got a sassy attitude and it’s great.

Flounder is the best friend you have always wanted. He’s down to explore and be adventurous, even when he’s nervous and he’s there when you get in trouble standing by your side. #truefriendship

First of all. Abu is a monkey! Everyone wants a monkey for a pet. And he’s a monkey that wears a hat and a vest and is super loyal. Also, flying on a carpet? Down.

4. Lumiére & Cogsworth — Beauty and The Beast

You can’t have one without the other. It’s just not possible. They are perfect when they are together. This sidekick duo is probably one of the most memorable.

He grants wishes, does a great Jack Nicholson impression and you ain’t never had a friend like him.

He’s a dragon, not a lizard. Get it right, because Eddie Murphy is not messing around and Mushu is ah-mazing.

Timon & Pumba are quite literally the best sidekicks that have ever happened in any movie ever. If you disagree with me, well, Hakuna Matata because I literally don’t care.