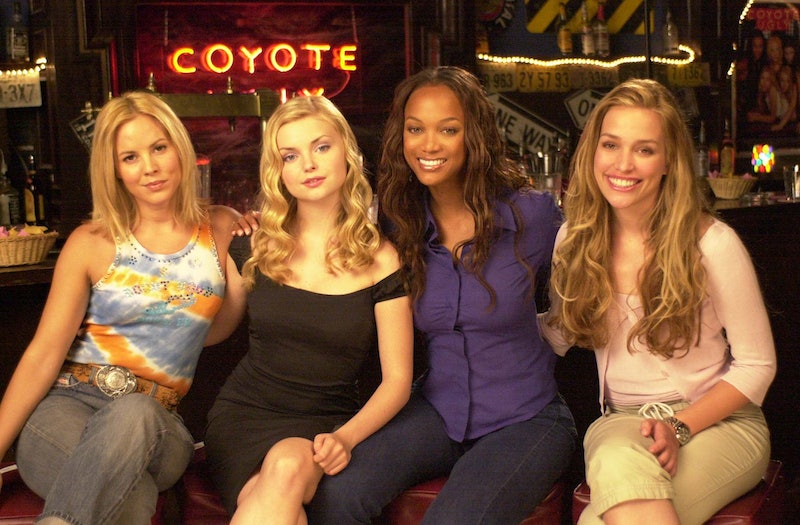 It's been 20 years since Coyote Ugly first danced its way into our hearts, yet it still remains loved by many. So much so that even a few cast members are chomping at the bit to return to their former roles. In fact, during a recent interview celebrating the film's big anniversary, Tyra Banks revealed that she'd love to make a Coyote Ugly sequel, and star Piper Perabo is on board too.

A Coyote Ugly sequel has actually been a passion project that Banks has been working on for years. "I’ve had a passion to do a sequel to Coyote Ugly for some time now," she told Variety. "I’ve even reached out to [producer] Jerry Bruckheimer and the team and the original writer and they’ve had some jam sessions on what it could possibly be." The original film centers around a young songwriter (Perabo) who moves to New York City in the hopes of having her songs discovered and ends up working at a bar that forces her to overcome her biggest fear: performing in front of an audience.

Banks didn't go into what she'd like to see in the actual sequel, but her co-star Perabo has some thoughts. "When Tyra and I were DMing, I was like, 'We have to really think about it,' because obviously we're all 20 years older and we have to rethink the story," she told Variety, adding she would love to see who would be running the iconic Coyote Ugly bar 20 years later. Perabo also noted that the film's feminist message would need to be updated with the times, explaining, "We're maybe in the third wave of feminism now and things have evolved and I would want the movie to reflect that evolution."

Regardless of what the specific plot to a follow-up movie would be about, Banks knows that she needs the help of loyal fans in order to make it happen. “I feel like we need to do some type of rallying cry to social media, you know, kind of like a petition to get people to sign to make the sequel," the America's Next Top Model judge added. "I actually really want to produce it. We have really been wanting to do that and even had a form of a treatment with the original writer. And even [Diane] Warren, who did the original music with [LeAnn] Rimes, is super passionate about this.”

This isn't the first time Banks has spoken out about reviving the Coyote Ugly franchise. She spoke about the possibility back in 2018 during an appearance on People TV's Couch Surfing where she shared her dream cast. "Oh, Selena Gomez, that’d be good," Banks said at the time. “Maybe Lady Gaga. The owner of the bar?" And just to further prove how high she was aiming, Banks proceeded to suggest one of the most prestigious names in Hollywood. "Meryl Streep dancing on the bar with us," she continued. “But, like, she would be the bar — she should be the bar! Method actor.”

If or when the sequel does come out, though, there are a few aspects of the story that would be worth changing, particularly when it comes to the type of woman that could be found dancing on the iconic bar. "I was told that I was too old," Maria Bello, who was only 32 years old at the time the film came out and played the bar owner, revealed during the same Variety interview. "The truth is the movie was run by men, right? All male producers, a male director, so I don’t know where that information came from, but that information came to me. It was different back then. I remember arguing about it, but I wasn’t gonna win."

If a Coyote Ugly sequel does happen, let's agree to let everyone and anyone get up and dance on that bar.