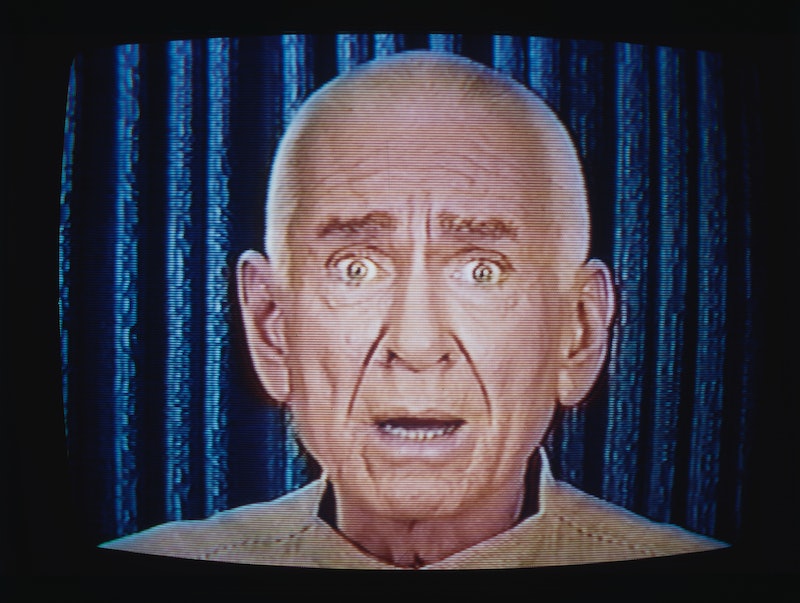 If you grew up in the '90s, then you probably remember hearing about the Heaven's Gate cult. The group is remembered as one of the most notorious cults in modern history because of its tragic end that saw 39 of its adherents die by mass suicide in 1997. But there is a much longer and more interesting story behind the group, and that story is being told in the most detailed way yet in the new HBO Max documentary series Heaven's Gate: The Cult of Cults. The docuseries interviews former members and associates, makes extensive use of archival footage, and acts as the ultimate guide to the Heaven's Gate cult.

Although the cult is remembered for its 1997 tragedy, it actually began more than two decades earlier — and made headlines even back then. After meeting in 1972, a man named Marshall Herff Applewhite and a woman named Bonnie Nettles began studying religion and ufology together, and they came to believe that they were spiritually linked and that they were the two witnesses from the Book of Revelation in the Bible, according to the doc. Referring to themselves as "The Two," Applewhite and Nettles began traveling the country and holding meetings where they would recruit followers by claiming to be aliens who would lead people to heaven in a spaceship. Remarkably, they were able to gain dozens of followers. As shown in the series, the group assembled for a meeting in a hotel in Westport, OR in 1975 and then they disappeared. The vanishing of close to 100 people made national news headlines, but in reality, the group had assembled at a campground in Boulder, CO, per History.com. Over the next several years, members of the group continued to live a nomadic lifestyle, living in campgrounds around the country and surviving through donations and working odd jobs.

Now going by the names "Do" (Applewhite) and "Ti" (Nettles), The Two continued to instruct their followers that, when the time came, their bodies would be transformed into alien bodies and they would board a physical spaceship bound for heaven. The group continued to grow in the late-'70s and early-'80s, up until Ti's death from cancer in 1985, History.com also reports. With Do, who always acted as the vocal leader of the group, now solely in the lead, the cult struggled in the immediate aftermath of Ti's passing. Do claimed that Ti had shed her earthly husk and ascended to her alien form, where she would continue to consult him. He began to speak more urgently of the group's ascension, and the cult went underground and online. Using their website (which is still in operation) to spread Do's teachings and recruit new members, the group began to grow again in the '90s when they saw the sign they'd been waiting for: the Comet Hale-Bopp.

There were rumors in some Fortean circles that Hale-Bopp was accompanied by a companion spaceship, and Heaven's Gate latched onto this belief. By the mid-'90s, the consensus was reached that Hale-Bopp was the signal that the group, now known as "Heaven's Gate," was set to leave Earth for heaven. According to the docuseries, the group began preparing a "ritual" for their outer space adventure, and when Hale-Bopp passed closest to Earth on March 22, 1997, they performed this ritual. Dressed in identical dark sweatsuits and black Nike sneakers, 39 members of Heaven's Gate — including Do — willfully ingested poison, lay down, and shrouded themselves to await transportation to heaven. Their deceased bodies were found several days later, when the cult's sole surviving member — who had been instructed to stay behind — received a package with their farewell videos and instructions on finding their corpses, according to LA Weekly.

The story of Heaven's Gate is notable not only for its tragic end, but for its uniqueness among cults. Its members were largely educated and well-to-do, there were no widespread reports of abuse or financial fleecing (though some male members did undergo castration as part of an abstinence pledge), and early investigators of the group found no evidence of brainwashing or coercion. The cult continues to puzzle to this day, which is why it has earned the HBO monicker "cult of cults."

More like this
Aemond Targaryen's Fate On 'House Of The Dragon' Is Full Of Revenge In The Book
By Grace Wehniainen
'House of the Dragon' Episode 7 Might Mark The End Of House Velaryon
By Kadin Burnett
24 Years Ago, 'Friends' Dropped Its Most Underrated Ross & Rachel Episode
By Grace Wehniainen
This House of the Dragon Character Will Create Another Scandal For Rhaenyra
By Kadin Burnett
Get Even More From Bustle — Sign Up For The Newsletter