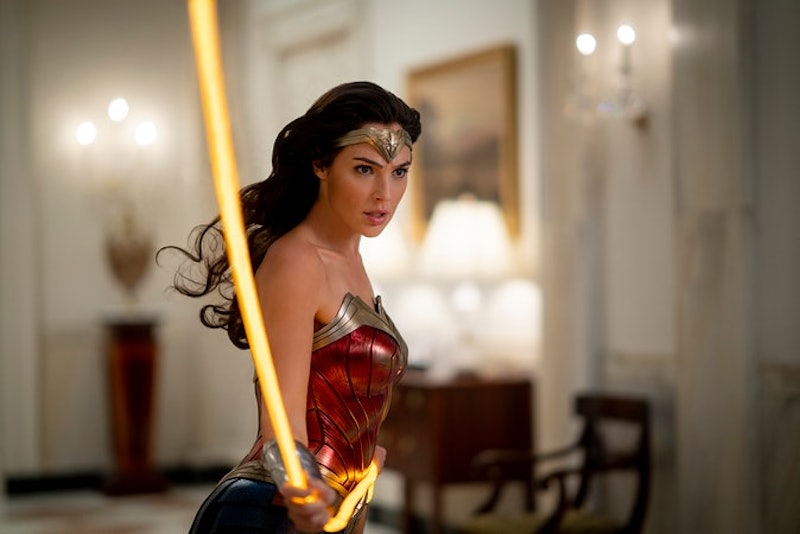 Only a few days after the DC film arrived on HBO Max, Wonder Woman 1984 fans noticed an error in the form of a punk t-shirt. The mistake appears in a scene that features a group of punk music fans wearing era-appropriate attire — except for one, who is donning a t-shirt with the album art for the Cro-Mags Age of Quarrel. The problem? The album, which wasn't released until 1986, would not have been available in 1984, which is the year the movie takes place.

While punk listeners might have taken issue with the error, Cro-Mags singer John Joseph defended the shirt's inclusion on Instagram. On Saturday, he posted a screenshot from the film, writing that director Patty Jenkins has been "a good friend since the 80's" and that she asked him to send her a band tee for the film. Joseph also defended the Age of Quarrel shirt being included. "The original album (black cassette) was recorded in 1984," he explained. "Me and Parris (guitarist) paid for the recording."

In his caption, the singer added a little-known fact about his longtime friendship with Jenkins. "Here's some trivia too," he wrote. "I got Patty her first directing gig. It was for the band Leeway." Turns out, she directed the group's "Three Wishes" video, but that wasn't the only interesting bit of info Joseph dropped. He also confirmed that Jenkins is a true punk at heart, revealing that she's long been a fan of the American rock group Bad Brains.

Other Cro-Mags members, including former drummer Harley Flanagan, were even more dismissive of the mistake. "DO PEOPLE REALLY THINK I GIVE A F*CK IF THERES A TIME LINE ISSUE WITH WONDER WOMAN 84?" he wrote on Instagram on Sunday, Dec. 27. Jon Wurster, the drummer for Superchunk and the Mountain Goats, also posted about it on social media. Joseph then hopped into the comments to once again defend the shirt, writing, "the album first came out in 1984 the artwork may be different but the songs are the same."

While the t-shirt does seem to be a timeline error, it might be a bit futile to nitpick a movie with a significant time travel element. After all, Steve Trevor, the pilot and love interest played by Chris Pine, comes back from the dead after perishing in a plane crash during World War I in the first movie. If the Cro-Mags shirt is out of place in the year 1984, Steve Trevor is as well, and nobody is taking to Instagram to criticize the historical accuracy of that detail.

More like this
What’s New On Netflix: Ana De Armas’ 'Blonde' & A Nick Kroll Special
By Arya Roshanian
12 ’90s Movie References You Missed In 'Do Revenge'
By Radhika Menon
Florence Pugh Reflected On Her ‘Don’t Worry Darling’ Experience On Opening Day
By Brad Witter
How To Stream 'The Woman King'
By Morgan Leigh Davies
Get Even More From Bustle — Sign Up For The Newsletter