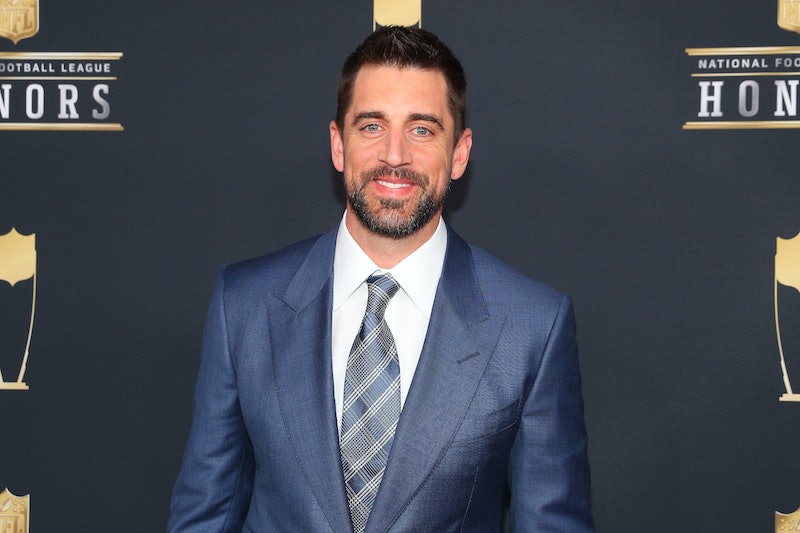 Only a few days after anonymous sources reported the NFL star was dating Shailene Woodley, Green Bay Packers quarterback Aaron Rodgers announced his engagement during the NFL Honors broadcast on Saturday, Feb. 6. Rodgers, who was named Most Valuable Player for the third time, thanked his "fiancée" during the event. He did not, however, share said fiancée's identity, leaving fans to speculate over whether it's Woodley or someone else. (Bustle reached out to Rodgers' and Woodley's respective representatives for comment but did not receive a reply at the time of publication.)

The NFL player opened his acceptance speech by reflecting on last year and revealing that he got engaged. "2020 was definitely a crazy year filled with lots of change and growth, some amazing memorable moments," he said. "A hundred-eighty straight days of having my nose hair scraped, playing for very little fans or no stands the entire season, I got engaged, and I played some of the best football of my career."

Rodgers went on to thank his teammates and the coaching staff for "their support, inspiration, protection, and incredible play on the field." The quarterback also showed gratitude for his "off-the-field" team, listing a few names and including a shout-out to "my fiancée." His convenient omission of his bride-to-be's name has fans online confused, as multiple outlets linked the quarterback to Woodley only the previous week. One anonymous source reported to People at the time that Rodgers and Woodley "seemed very happy," but another told the publication that the two were dating casually.

So, did Woodley and Rodgers just casually get engaged? While neither has confirmed the proposal, the couple was first linked in July 2020, following the quarterback's breakup with racecar driver Danica Patrick that same month. On Feb. 3, an anonymous source for Us reported that the two were dating, saying they "started off as friends, but things have turned romantic." The source also stated that the two were living apart due to work, telling the publication "the relationship is long-distance for right now, but they are making it work."

Rodgers, who has been on the Green Bay Packers' roster since 2005, has been in high-profile relationships in the past. The NFL MVP was previously linked to Olivia Munn, whom he dated for three years before splitting in 2017, as per People. Meanwhile, Woodley opened up about her breakup from rugby player Ben Volavola in an interview with The New York Times in April 2020. At the time, the Big Little Lies star spoke about the importance of finding yourself outside a relationship, saying, "I'm very much single, and I've chosen to be single for a while."

More like this
Who Is "Daddy" Pedro Pascal Dating? People Are Thirsting Over The 'Last Of Us' Star
By Alyssa Lapid
The 2023 Super Bowl Commercials Feature A 'Breaking Bad' Reunion & Missy Elliott
By Alyssa Lapid
Twitter Is Shook As Tom Brady Holds Back Tears Announcing His 2nd Retirement
By Marina Watts
David Beckham’s Controversial Qatar Deal Skyrocketed His Net Worth
By Catharina Cheung
Get Even More From Bustle — Sign Up For The Newsletter
From hair trends to relationship advice, our daily newsletter has everything you need to sound like a person who’s on TikTok, even if you aren’t.