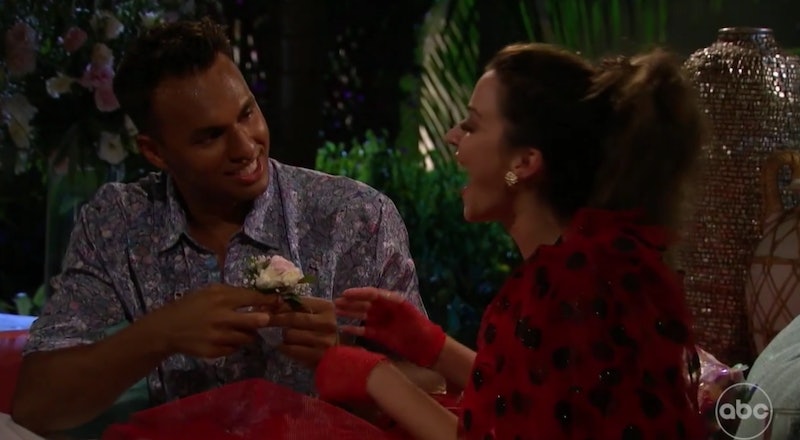 The Sept. 28 episode of Bachelor In Paradise took a page out of countless high school rom-coms and set its climax at the prom. When the cast found out, sprits were high. Who wouldn’t want to go to an ‘80s-themed dance with slow dancing and oversized shoulder pads?

Tia, however, was less than excited. She spent most of the afternoon sulking on the beach about not having a date, since James Bonsall had cut off their relationship in order to be with new arrival Anna Redman from Matt James’ season of The Bachelor.

Once at the prom, Tia seemed to be the odd one out, without anyone to dance with — that was until Aaron swooped in out of nowhere. Aaron decided to take Tia by the hand, in front of Chelsea, and whisk her outside. Once alone on a couch, Aaron spoke about not wanting to leave the beach with any regrets, and gifted Tia a corsage. The duo then began to make out, much to the surprise of everyone both at the prom and at home. “WAIT WHERE IS THIS AARON AND TIA THING COMING FROM HAALLPP,” opined one fan. Added another: “I don’t know if it’s the three hour episode just taking a toll but I feel like we’ve entered the twilight zone Aaron just out of no where making out with Tia.”

Needless to say, no one saw the Aaron and Tia connection coming, especially because Aaron spent most of the episode trying to secure his relationship with Chelsea.

Not to mention that Tia had pretty much given up on finding a partner.

Everything will assumedly be ironed out when the BiP finale airs on Oct. 5.