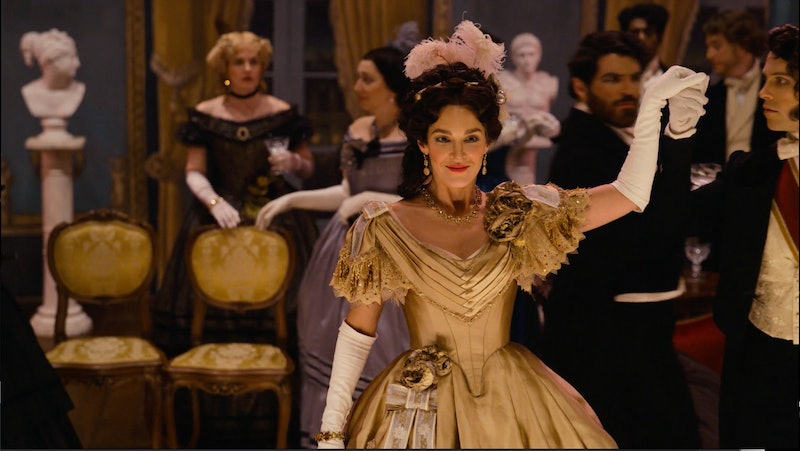 Season 2 of Dickinson has seen Emily casting about for a way to stardom. She writes feverishly for Sue, then pins her hopes on newcomer Samuel Bowles, who may provide an outlet for publication. But in Episode 6 she finds a new artistic inspiration in the form of an apparently fictional opera star named Adelaide May. As the Dickinson family heads to the opera, Emily is entranced by the soprano’s performance in La traviata, full of zeal as she watches the opera play out across the stage.

After the performance, she seeks out May, who delivers some tough love advice to Emily about fame and fortune: “There’s no such thing as forever … If you’re seen then you’re exposed. Everything that’s exposed — well, it goes stale.” As Emily ponders May’s performance and the empty theater, she is forced to think about what fame really has to offer her, and why she’s pursuing it so relentlessly.

By the 1850s, opera was becoming a more common pastime along the East Coast. But while opera was taking off in the U.S., Adelaide May was not — because there was no Adelaide May. However, there were two famous opera singers active at that time both named Adelaide, and it’s possible that some of May’s biography is inspired by them. Both Adelaide Borghi-Mamo and Adelaide Phillips were internationally known, and performed operas by Giuseppe Verdi, the composer behind La traviata. Neither, however, toured in the U.S., where opera appreciation was still in its relative infancy.

But while Adelaide May isn't exactly a real person, the singing in this episode very much is. Adelaide May is played by Kelli Barrett, who's had guest spots on TV and film, and appeared in a handful of Broadway productions. Most recently, she's been in the original Broadway cast for Gettin' the Band Back Together, Baby It's You!, and Doctor Zhivago.

Perhaps the most important inspiration for the character comes from the opera itself. In the story of La traviata, a courtesan (who, as Lavinia notes in the episode, is fatally ill with tuberculosis) happens to fall in love with a kind suitor. Throughout the opera she is torn between giving up a life she loves to be with a well-off man who has awakened her desire to be loved.

It’s not a reach to see why the opera stirred such feelings in Emily, especially as the camera superimposes Sue over May’s presence, culminating in a final vision of Sue asking Emily about what drives her. “You crave meaning, you crave beauty, you crave love,” the vision of Sue says as she pulls Emily into a passionate kiss.

While May wasn’t really an opera singer, her fictional performance ultimately serves as a catalyst for Emily’s dueling impulses — to fight for fame, love, or something else entirely.

More like this
'Ted Lasso' Season 3 Might Be Its Last
By Zosha Millman and Grace Wehniainen
'The Queen’s Gambit' Season 2 Tweet Wasn’t From Anya Taylor-Joy
By Mary Kate McGrath, Jack Irvin and Grace Wehniainen
Ashton Kutcher Wants Danny Masterson “To Be Found Innocent” In Rape Retrial
By Jake Viswanath
Pamela Anderson's Sons Brandon & Dylan Have Their Own Hollywood Careers
By Arya Roshanian
Get Even More From Bustle — Sign Up For The Newsletter
From hair trends to relationship advice, our daily newsletter has everything you need to sound like a person who’s on TikTok, even if you aren’t.