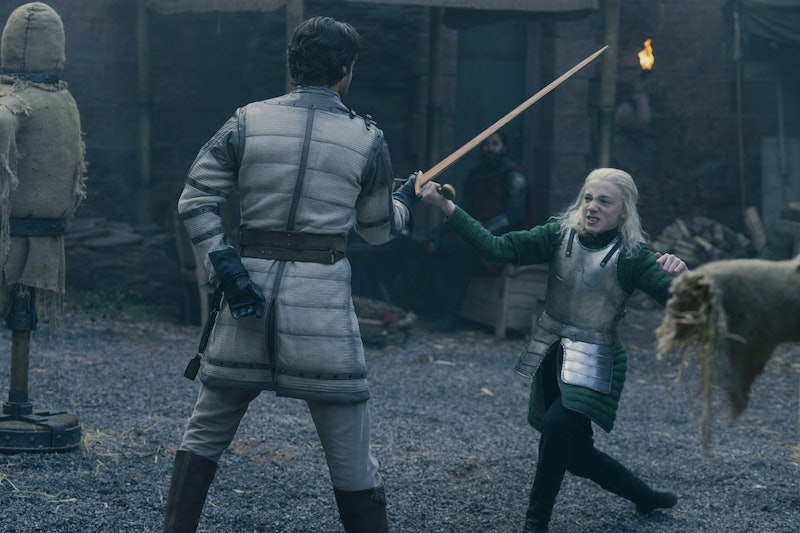 Spoilers ahead for the Fire & Blood book. The House of the Dragon Episode 6 time jump saw several characters switch to new actors (hi, Olivia Cooke and Emma D’Arcy as grown-up Alicent and Rhaenyra!). And of course, some characters appeared for the first time, too — including Viserys and Alicent’s third son, Aemond Targaryen. The young prince is currently played by Leo Ashton, though we know that Ewan Mitchell will eventually play the older version of Aemond, per HBO. So expect another time jump at some point in the near future.

Aside from the person playing him, what else will change for Aemond during his House of the Dragon run? Well, quite a lot! Here’s everything you need to know about what happens to Aemond Targaryen in the book Fire & Blood, on which House of the Dragon is based.

As you can already see on House of the Dragon, Aemond really wants a dragon, and he gets a lot of ridicule for it, even being tricked with a pig that’s dressed up like a dragon (which was kind of funny). So strong is Aemond’s desire to be a dragon rider that he risks it all in Fire & Blood and tries to mount Vhagar as his own. As we just saw in Episode 6, Vhagar — “Queen of All Dragons” — is now riderless after she killed Laena (by request!) during childbirth.

During the process of trying to claim Vhagar, Aemond is confronted by his nephews — who, you’ll remember from the pig prank, aren’t exactly his besties. Aemond is ultimately successful in getting Vhagar, but a fight breaks out and Lucerys cuts out his eye in the violent skirmish that follows. He comes to be known as Aemond One-Eye, but at the very least, he now finally has a dragon.

When Alicent finds out, she wants to enact an eye-for-an-eye punishment (literally), but Lucerys is ultimately spared. It’s not the end of the tension between the families, though. In fact, later on in the Dance of the Dragons (more spoilers ahead!), Aemond ultimately kills Lucerys — and, well, Daemon doesn’t let that slide on behalf of Rhaenyra. The two fight in a dragon duel that ends with Daemon fatally stabbing Aemond... in the eye.

But back to the present — specifically, when will Aemond lose an eye and become a dragon rider on House of the Dragon? Super soon, it seems. The Episode 7 trailer sees Alicent say “there is a debt to be paid,” and Vhagar is declared stolen. Plus, Episode 6 already planted the seeds for Aemond’s fate in a sneaky way. When he complains to his mom about getting pranked, Alicent promises that he “will have a dragon one day.” Immediately after, Aemond’s sister, Helaena, says “you’ll have to lose an eye.” She’s not even talking to Aemond, but to the little creepy crawler in her hand — but still! A clever nod to the events that are about to unfold.