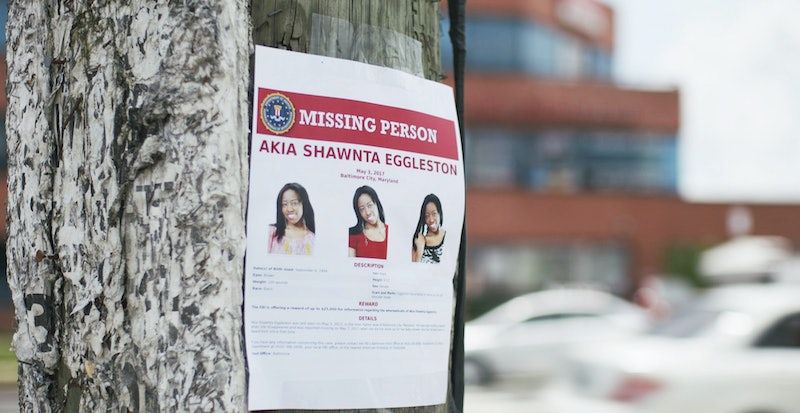 HBO’s new documentary series Black and Missing follows Derrica and Natalie Wilson, two sisters-in-law who started the Black and Missing Foundation in order to bring awareness to the countless cases of missing Black people forgotten by law enforcement and overlooked in news coverage. Specifically, the docuseries examines how systemic racism affects the attention and resources dedicated to solving cases of missing Black people — which remain unresolved four times longer than those of white people.

One of the missing persons cases explored in the show is that of Akia Eggleston, a 22-year-old who went missing from Baltimore, Maryland in 2017. Eggleston, a single mom with a three-year-old daughter, was eight months pregnant at the time of her disappearance; she was expected to attend her baby shower on May 6, 2017 but never arrived. “She had plans to get her hair done on that Friday, and she was supposed to pick out her dress, and the baby's dress, her daughter, so she was getting ready, she was happy,” Eggleston’s aunt Sanobia Wilson told local Baltimore news station WMAR-2 News. “Before I even got there, people were calling me, telling me 'she wasn't here.' They had already been waiting two hours for her to come there, so when I got the call stating that she wasn't there and nobody could reach her. I knew something was wrong then.”

Eggleston’s family and loved ones are certain that she wouldn’t willingly abandoned her life — especially not without her three-year-old daughter. But when they first went to the Baltimore Police Department station in Cherry Hill to report her as missing, Wilson said that their pleas for help weren’t taken seriously. Instead, they decided to look for Eggleston themselves. “We did also search the park. It was only about 14 of us. Cherry Hill is a large park. We had no help, no resources. We split up into four groups and walked through the woods, through trash, through dirt,” Wilson explained.

When the police did eventually investigate, they discovered that Eggleston was last seen three days prior to her shower on May 3, 2017, when she was spotted on a surveillance camera withdrawing $572 from a bank in downtown Baltimore. Shawn Wilkinson, Eggleston's stepdad, says the money could have been for a down payment for a new apartment with her baby’s father.

Although the Baltimore police department declined to share details about the case with People for a September 2021 article because the investigation is still ongoing, a spokesperson for the department discussed the case in a June 2017 news conference. “Foul play is something that we are absolutely exploring,” the spokesperson said, “because she was eight months pregnant at the time, and we're obviously beyond the point where she could have given birth.”

Sanobia Wilson is glad that her niece’s disappearance is finally getting more attention. But it’s been four years since Eggleston went missing, and Wilson wishes law enforcement had done more from the start. “We should have gotten the resources in the beginning,” Wilson told WMAR-2 News in early November 2021. “We would have found some clues, but we were not given those resources, because Akia is an African-American, young, single, mother of two. So, she was not valued. She was not looked at as if she mattered to anybody, but she mattered to us.”

More like this
Rachel Nickell’s Son Wants The Police To Take Accountability Over Errors
By El Hunt
Linda Ronstadt’s “Long Long Time” Plays A Pivotal Role In The Last Of Us
By Brad Witter
Here’s What Happens To Bill & Frank In 'The Last Of Us' Video Game
By Brad Witter
15 Photos Of 'The Last Of Us' Star Pedro Pascal That Cement His Zaddy Status
By Radhika Menon
Get Even More From Bustle — Sign Up For The Newsletter
From hair trends to relationship advice, our daily newsletter has everything you need to sound like a person who’s on TikTok, even if you aren’t.