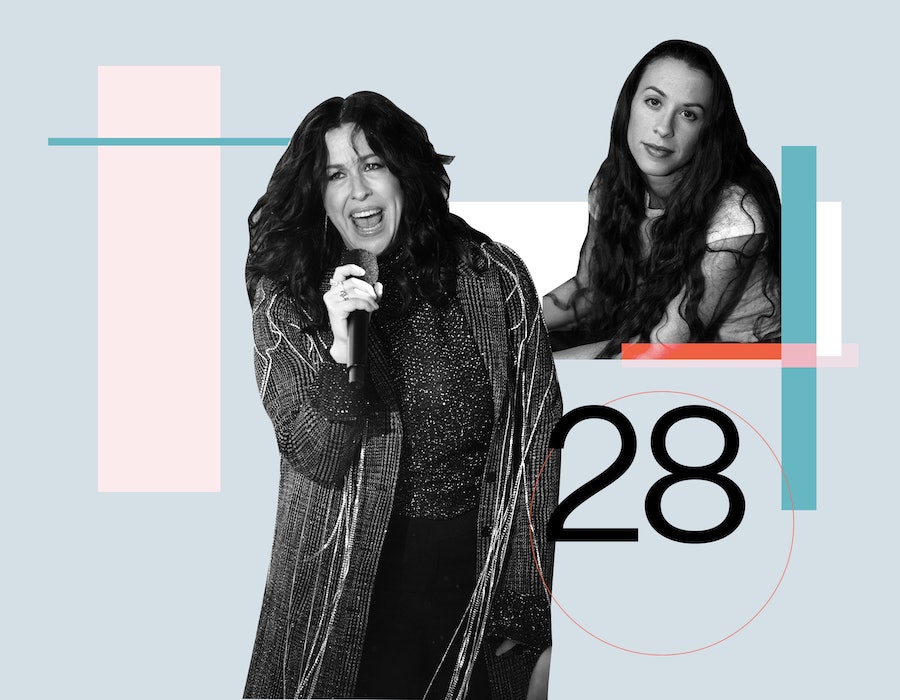 The night before the release of her fifth studio album Under Rug Swept, Alanis Morissette woke up in a panic and was wide awake until morning. Though sleepless nights were an unintended tradition before all her album drops, this one felt particularly nerve-wracking: it was the first record the singer-songwriter had made entirely on her own, without big name producers or co-writers. With Under Rug Swept, Morissette was hell bent on proving herself in an industry that, in 2002, still had a tendency to look past women and their stories.

At 28, Morissette’s place in music history was already set. Less than a decade after the 1995 release of her breakthrough record Jagged Little Pill, which would ultimately reach double Diamond status, the Canadian singer-songwriter’s challenge at the time wasn’t about making it, but proving she could do it on her own. “Producing it on my own was my way of answering the patriarchal perception that women couldn't produce, that somehow we had to lean on all these men in our careers,” Morissette tells Bustle. The record was released just shy of her 28th birthday, and as soon as it was out in the world, a sense of calm washed over her. “I [proved] to myself that I didn't need someone else to produce me.”

Despite her critical and commercial success, Morissette’s late 20s were still mired with anxiety and some truly dead-end relationships. “I was a lot lonelier at 28, very lonely actually,” she says. Writing lyrics was her way of coping with her past and her present. “All my lyrics were so autobiographical that all I needed to was tell my truth on a personal level.”

Her truth still resonates. Some 25 years later, Jagged Little Pill has been turned into a Tony-winning Broadway musical, and her nine studio albums have collectively sold millions upon millions of copies. Most recently, she's been working on the Audible project Alanis Morissette: Words + Music, in which she provides raw commentary on the deepest personal and professional aspects of her life. And she’s still pushing herself creatively and making music, releasing her latest album Such Pretty Forks in the Road this summer and prepping for her highly anticipated Jagged Little Pill 25th anniversary tour alongside Liz Phair and Garbage, though it's been postponed to 2021. Below, Morissette, 46, reflects on dating, touring the world, and the traumatic experience at the center of her hit single “Hands Clean.”

I lived in Los Angeles, I went to a lot of art showings, I would go to movies all the time, I surfed and I would paddle board. I was going on boats a lot; there was something about ocean time and jet skiing that was really energizing for me in that time period. I loved traveling, I loved food, I was just sort of this pseudo-continental gentlewoman traveling the world drinking cool smoothies and eating food and going to museums. I’d have a theme for every tour: I'm going to get really ripped on this tour, on this tour I'm going to eat every [kind of] chocolate I could find in every country, and the next tour I’m going to find every tarot store I could possibly find.

Horrifying in what way?

I always feel like there are three parts of the whole dating world. The first part is just if you are having fun, flings are fun enough. The second two phases are a boyfriend/girlfriend — or girlfriend/girlfriend — relationship for two years or so. You break up and it's horrible. And the third phase is long term commitment or marriage or whatever you want to call it. They are very different mindsets, and during that time when I was 28, I was definitely in the two-year, short term mindset. I wasn't quite ready for the big long term commitment.

You’ve said before that “Hands Clean,” the lead single off Under Rug Swept, was written for your own healing from a tumultuous time in your life. Has your relationship to that song changed over the years? How do you feel about it now?

"Hands Clean" was about being statutorily, sexually raped as a child, but the video was hilariously interpreted and at one point I actually turned to the record company people and said, "Have you heard the lyrics to this song? Are you sure this is the video you want to make?" "Hands Clean" was a pretty harrowing song to write — it’s basically a dialogue between me and this person who was in this position of power throughout my teen years and taking advantage of it. It was sort of before #MeToo, and I think a lot of people missed the story. People enjoyed "Hands Clean," but there was no followup on what the song was about. There was still a huge stigma around sexual abuse and coming out and speaking about it publicly.

There were a few relationships that I wish I would have said, “Hey, this is going to be super temporary. Don't worry, you’re going to marry Souleye and you’re going to be so psyched, so in the meantime don't get too hung up on any one person.” I’m a recovering love addict. I was pretty mired in love addiction; at that time it had not been addressed yet, so I would give her the advice of learning about her love addiction. Therapy has hands-down completely changed my life.

Did you feel accomplished at 28, or like you knew where you were going with your music and your life?

I felt like I knew exactly what I was doing in my career because it was so intuitive. [But] I was still having some real challenges in romantic relationships; I was getting a little scared. I just didn't know what was making it so I couldn't go to that level of deeper commitment, and frankly it was because I wasn't ready. But it’s hard to feel that in the moment.

It's the same process it has always been from when I was 19 all the way to now. The difference between 28 and now is then there was an element of me crossing my fingers and hoping a song will come, and now I know a song is coming. I'm assured it will come — I don't know what the topic is going to be about necessarily, I don't know what the song will be and I'll likely be surprised, but I have complete assurance. It’s relaxing to know that all my songs are written in the exact same way, where the living of the story takes however many decades, but the writing of the song itself is 15 minutes.

More like this
At 28, Debra Jo Rupp Was Living A Much Different '70s Show
By Grace Wehniainen
At 28, Rosie Perez Risked Her Career To Stop Playing Stereotypes
By Gabrielle Bondi
Linda Ronstadt’s “Long Long Time” Plays A Pivotal Role In The Last Of Us
By Brad Witter
The Jonas Brothers' New Album Has A Very Meta Name
By Alyssa Lapid
Get Even More From Bustle — Sign Up For The Newsletter
From hair trends to relationship advice, our daily newsletter has everything you need to sound like a person who’s on TikTok, even if you aren’t.