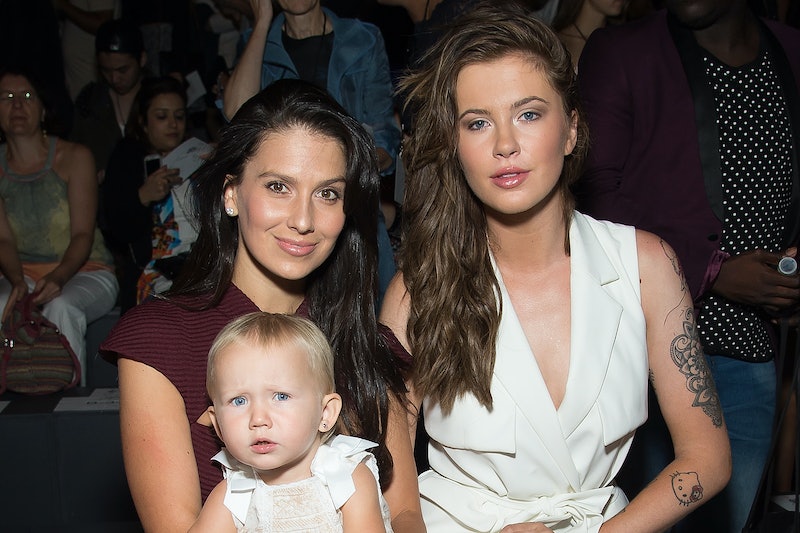 If you were online at all over the holiday weekend, you probably noticed some social media chatter about Hilaria Baldwin. After Twitter sleuths accused the yoga instructor and author married to Alec Baldwin of pretending to be Spanish her whole life, changing her name, and faking an accent, Baldwin took to Instagram to clear the air about who she is and where she really comes from. "I was born in Boston and grew up spending time with my family between Massachusetts and Spain," she wrote alongside a lengthy video explanation. "My parents and sibling live in Spain and I chose to live here, in the USA." In the comments, her stepdaughter, Ireland Baldwin, also came to her defense.

"I wish people had the chance to know you and know your story the way that I do rather than from a fabricated nine hour long Instagram story," the model wrote. "I think you are an incredible mom and an inspiration." Ireland went on to say how lucky she is to have Hilaria as a stepmom. "I love you and I find it really sad that people have the time that they do to play detective and make up a lot of lies and fabricate a lot of truths to fit a story."

Hilaria addressed the accusations in her Instagram video, from the reason she goes by two different names to the resurfacing of a clip in which she appears not to know how to say "cucumber" in English on live TV. "When I was growing up, in this country I would use the name Hillary, and in Spain, I would use the name Hilaria," she said. "It always kind of bothered me that neither name sounded good in the other language so I would use one or the other." Years before marrying actor Alec Baldwin, however, she decided to consolidate the two to make things easier.

As for the cucumber blunder, which happened during an old cooking segment on the Today show, Hilaria said that she sometimes mixes English and Spanish unintentionally when she's nervous. "I am that person that if I've been speaking a lot of Spanish I tend to mix them, and if I'm speaking a lot of English, then I mix that," she explained, adding that it's something she's always been "insecure" about. "When I try to work I try to enunciate a little bit more, but if I get nervous or upset or something then I start to mix the two."

In another comment on Hilaria's post, Ireland defended her stepmom's resurfaced viral TV moment. "She definitely knows what a cucumber is, but I've been on talk shows before and I have been so nervous and I've said really dumb sh*t under pressure and couldn't really imagine what I would say if I were on a talk show and having to cook in front of the entire country," the 25-year-old model wrote. "Also I have friends again from all different places who speak multiple languages who mix up words all of the time because anyone who speaks many languages would tell you that it's easy to mix up words."

Ireland wasn't the only member of the family to defend Hilaria publicly. Alec shared a video on Instagram as well, urging his followers to check their sources before spreading misinformation. "There's things that have been said lately about people that I love and I care about deeply, which are ridiculous," he said, referring to the allegations that his wife is guilty of cultural appropriation. "Majority of what's been said is false, and some of it's so spectacularly false, and they've said it about people I love." And after calling out Facebook, TMZ, and faceless social media accounts for spreading mistruths, the actor left viewers with one final message. "When you love somebody, you want to defend them," he said. "Consider the source."

More like this
Alec & Hilaria Baldwin Gave Their 7th Child Another Version Of The Name Hillary
By Stephanie Topacio Long
Stormzy Made A Passionate Speech About The Importance Of Diversity
By El Hunt
Pro Footballer Zander Murray Is "Blown Away" By Support After Coming Out
By Sam Ramsden
Everything To Know About Taylor Swift’s 10th Studio Album, 'Midnights'
By Grace Wehniainen and Jake Viswanath
Get Even More From Bustle — Sign Up For The Newsletter