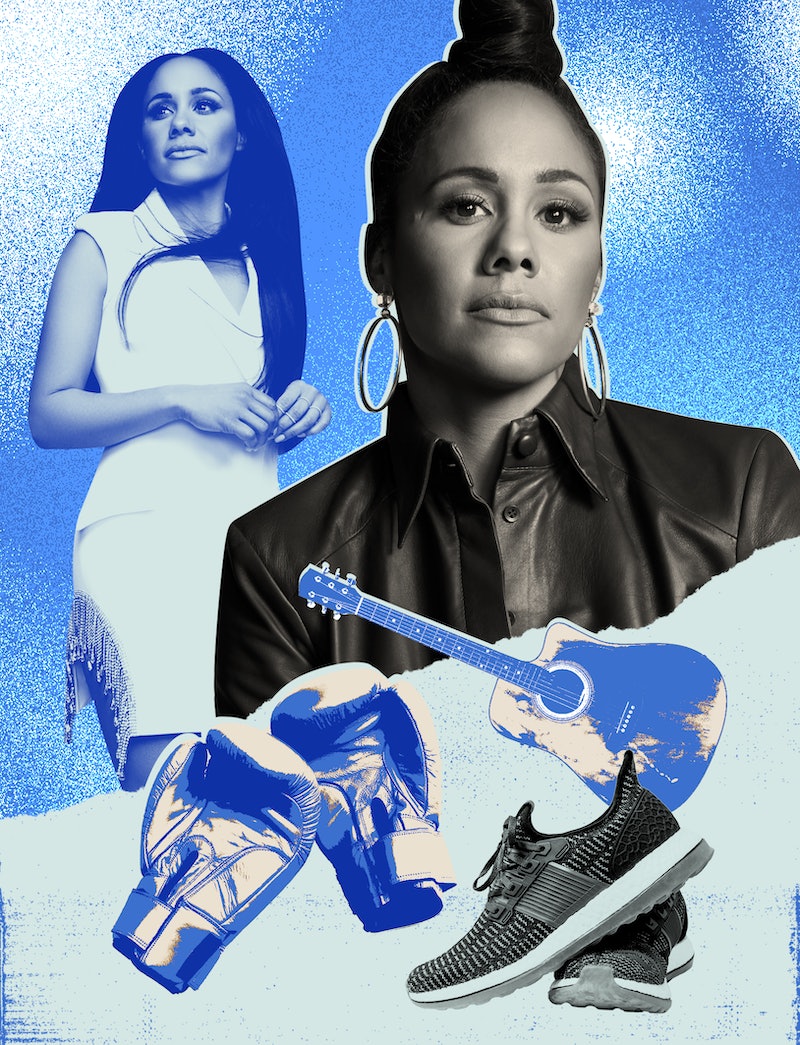 In “Pep Talk,” Bustle chats with celebrities about finding levity in a year of loss. This week, hear from the pioneering Alex Scott as she prepares to present Summer 2021 Olympics in Tokyo.

Alex Scott admits that she's been going 100mph, even during lockdown, and she’s showing no signs of slowing down. “I’m always like, what next? I need to keep going,” she tells Bustle over Zoom. “I think that’s what always keeps me at the top of my game — whether that’s as an athlete or where I’m at now. I know that I can never get complacent.”

Far from complacent, the broadcaster, pundit, and professional footballer has become a firm fixture in British sports coverage in recent years. As I type, Scott is being praised as a “stand-out pundit” during the Euros, thanks largely to her successful years playing the game as a right-back for Arsenal and England.

While live sports were paused during lockdown, in the past year, the 36-year-old became the first woman to present BBC’s Football Focus. And Scott is soon to embark on another “pinch me” moment, hosting BBC’s coverage of the Tokyo Olympic Games alongside Clare Balding on BBC One (from the opening ceremony on July 23, through to the closing ceremony on August 8).

Scott insists that reeling off all of these groundbreaking accolades make her “go a bit shy.” She explains that, “because people see me on TV, they expect me to be this outgoing person, but when I actually walk into a room, I’m a bit shy.”

“I’ve managed to achieve the ‘first this, first that’, but I don’t think I’ve ever set out to be that person,” she continues. “When I look back on my football career, yeah, I achieved 140 caps, but I knew I wasn’t the best. I knew I had to work hard to keep achieving, and that's the same in my media career.”

Here, she speaks to Bustle about how she remains so driven, keeping it “real” both on and off-screen, navigating social media trolls, and why she’s Team GB’s “biggest cheerleader”.

What is it about watching sport that brings people together?

It’s a conversation starter isn’t it – even if you’re not so into sport, you’ll know someone who is, or plays at some sort of level. There’s a story involved, it unites people in such a way, that’s what I love about it. And that’s what was missed during lockdown.

What are you most looking forward to about the Olympics?

I never grew up dreaming that I’d be a part of the Olympics, so [it was incredible] for me to even have that opportunity in 2012 [Scott represented Great Britain at the 2012 Olympics as a footballer]. Fast forward to now, where I am this summer, sometimes I have to pinch myself. Like, is this still happening to me? I feel so lucky.

Tell me about your experience of lockdown.

During lockdown, I did The One Show, and I was asked: “How are you, Al?” I answered honestly, “Some days I’ve been good, and some days not so good, but I’m trying to get over that.” The response that I had was major.

I never try to be something I’m not or pretend to be. If I’m down, you can see that, or if I’m really positive then you get that off me. That’s what people have connected with. It’s just making sure that we’re being real about it.

What positives came out of lockdown for you?

When I look back over lockdown, I think I still managed to achieve some amazing things. There have been some massive highs. At the same time, I also managed to have deeper conversations with people that, maybe because I am usually 100mph, I never allowed myself to before.

How do you enjoy the quiet moments?

I need those quiet moments. I plan my day to include a boxing workout, or a walk, because that’s my moment of calm. I’ve learned that those moments are just as important as big career moments. They’re both connected, and that’s what keeps you real, and grounded.

How do you deal with online abuse from social media trolls?

When I first went through it, I found it super tough because I was hiding it. I didn’t want to be that person who couldn’t handle criticism. Then I realised it wasn’t criticism – because I’m an athlete, I can take criticism – this was trolling and abuse. So, when I started speaking openly about it, it was actually a form of therapy, a release. I think it opened the door for a lot more people to say they were going through it, too. Now we’re having that conversation more openly, it’s forcing more platforms to make change happen – which we still need to push for.

What advice would you give to someone who’s having a hard time right now?

Just know and remember that we all go through struggles. Obstacles are there for a reason. They can stop you, or make you stronger and grow into a person that can overcome them. You will come out of the other side better.

You’re seen as a role model, what’s that like?

I don’t think I set out to be that person. Yet, when people say I’m inspirational, and a role model, it does sink in. I’m just trying to work hard, get my head down... I think, if I can do this, you can too. I want to bring you with me. I’m not just out here thinking about myself. It’s the bigger picture, and what it’s doing for everyone else around me. I’m like c’mon, you’re coming with me.

Two million viewers watched BBC’s Women’s Football Show on the first weekend back after lockdown. What are your hopes for women’s football post-pandemic?

To be celebrated more! When I think back to when I started, or even in 2012, to where we are now, we are celebrating our female athletes more than ever before, and we need to keep shining a light on them. We need to keep having these amazing conversations. And showing them in different ways. Showing that they’re amazing role models with amazing stories, to inspire a whole new generation to come through.

Which female athlete would you like to shine a light on?

Going into the Olympics, Dina Asher-Smith, definitely. She is going to be our poster girl. She’s such an incredible person, and hopefully we can celebrate her being our amazing Olympian, bringing home a gold.