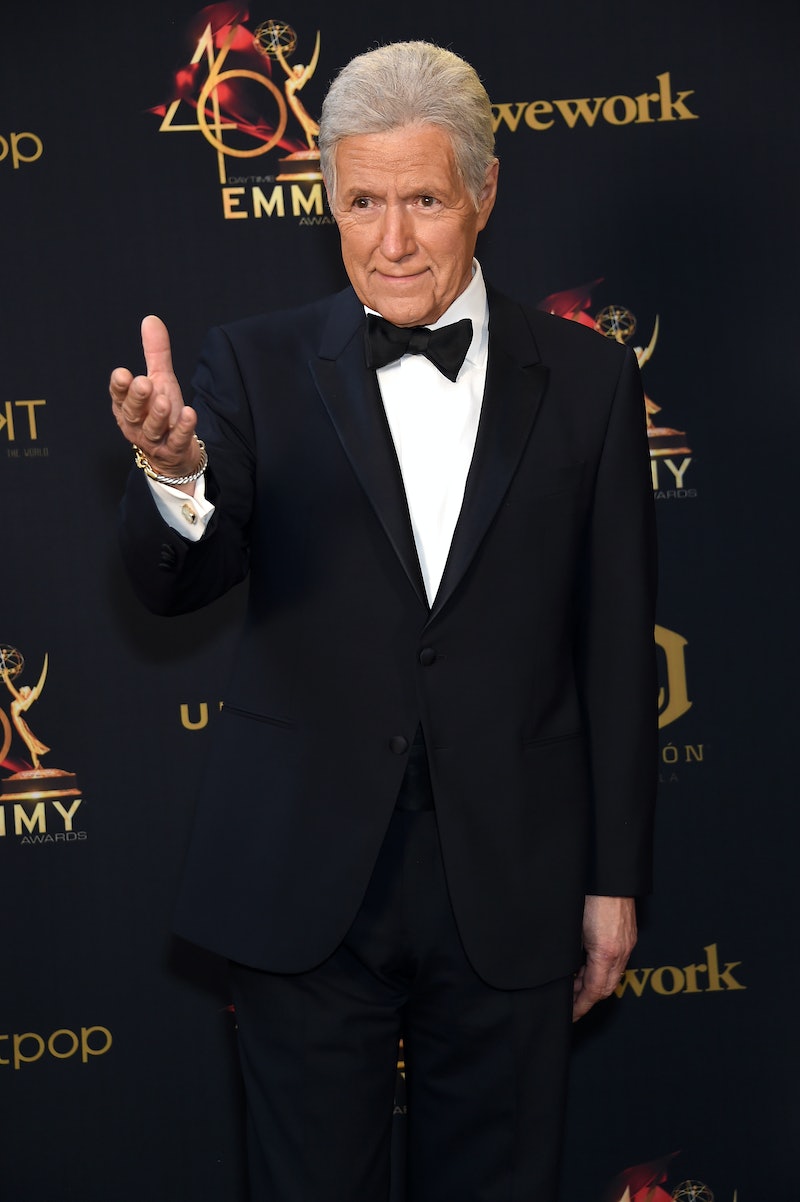 The loss of a TV icon has not gone unnoticed. After longtime Jeopardy! host Alex Trebek died on Sunday, Nov. 8, Twitter was quickly flooded with beautiful tributes. Numerous celebrities joined in, sharing stories of their friendships with Trebek, memories of working together, and how he impacted us all. The quizmaster was clearly beloved.

Trebek hosted the long-running game show for 36 years, and in that time, he built quite the following, including fans who would go on to become famous themselves. In his tweet, celebrated singer John Legend remembered being obsessed with Jeopardy! in his “nerdy” childhood years. Others, including Trebek's friend Ed Asner, shared the host’s best qualities. Many highlighted what a “gentleman” he was.

The View co-host Rosie Perez had a funny story about mispronouncing Mt. Vesuvius in front of Trebek, who appeared in the 1992 comedy White Men Can’t Jump with her. As he did with contestants on the show, he found a way to teach her the correct pronunciation. “He went right along [and] ad-libbed ‘checking with the judges,’” Perez wrote.

Trebek truly was one of a kind, and the celebrity tweets posted in the wake of his death serve as the perfect reminder of that.

The Academy Award-winning actress painted a beautiful picture of her wish for Trebek.

Trebek’s had many great qualities, and chief among them for Reynolds was the fact that he was a fellow Canadian.

The Grammy winner — and Ivy League graduate — is a long-standing Jeopardy! fan.

The Modern Family vet had nothing but lovely things to say about his late friend.

Chris Harrison Honors A Legend And A Gentleman

The Bachelor franchise host paid Trebek his due.

The comedian and talk show host thought of Trebek’s grieving family and fans.

The actor took it back to their White Men Can’t Jump days. Of course he noticed her mispronunciation.

The Late Show host was sad to see another 2020 tragedy. Same, Jimmy.

The actor shared his emotional reaction in a touching tribute.

Consider it a thank you from the masses.

The actor said farewell to the legend.

Clearly, the Rebecca star was familiar with the show.

The Saved by the Bell star included a photo that perfectly matched his description of the “legend of a man.”

More like this
New Details About Jeremy Renner's Snowplow Accident Reveal The Actor's Intentions
By Sam Ramsden
The Beyhive Is Mad At Harry Styles After Beyoncé’s Album Of The Year Snub
By Jake Viswanath
Beyoncé Has Officially Won The Most Grammys Ever & Twitter Is Losing It
By Jake Viswanath
Jameela Jamil Defends Sam Smith After Trolls Body-Shamed Them
By Jake Viswanath
Get Even More From Bustle — Sign Up For The Newsletter
From hair trends to relationship advice, our daily newsletter has everything you need to sound like a person who’s on TikTok, even if you aren’t.