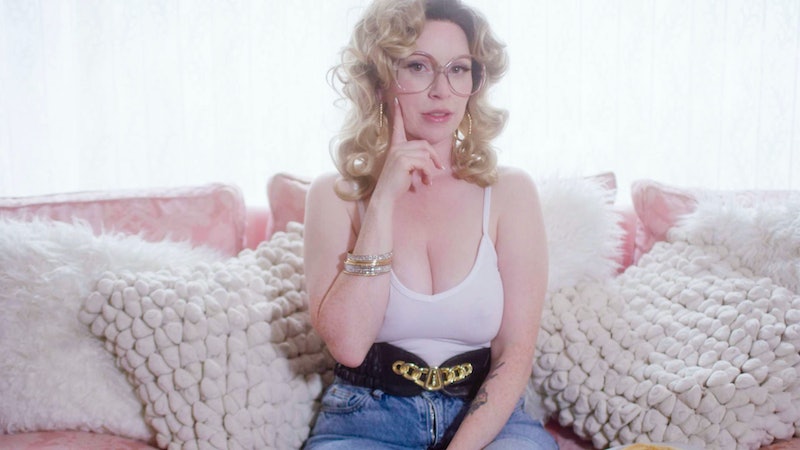 The mystery of content subscription service OnlyFans is set to be explored in a new documentary for Channel 4. Aptly titled How To Make It On OnlyFans, three aspiring content creators are guided by a former noughties glamour model turned consultant. But who is Alex Sim-Wise, and how did she transition from modelling to running her own consultancy whilst becoming one of the top 1% on OnlyFans?

Pitching herself as the ‘one-woman Trinny and Susannah for slags’, Sim-Wise is a glamour model who specialises “in tease content, fantasy character creation, and helping other creators make the most out of their content online,” as she writes on her site.

Sim-Wise started her career in the adult industry as a stripper to support her studies at the University of East Anglia, and by the time she graduated she had been given the title of FHM’s Student of the Year, which lead to a contract with a model agency that resulted in Sim-Wise being featured in Playboy and Page 3.

During that time, she also had a popular blog on MySpace which eventually resulted in a column for FRONT magazine. From there, Sim-Wise worked for an “obscure cable channel” called Sumo TV with her own show, In Bed With Sim-Wise. She would eventually become the first glamour model to be signed by TV talent agency Model Management, which led to hosting gigs on MTVHD, and BBC Radio 1 before retiring at age 30.

After a five-year break raising her child and retraining as a beauty therapist, Sim-Wise returned to the now web-dominated glamour modelling scene. Now making “more money than ever” thanks to OnlyFans, Sim-Wise quickly became one of the site’s top content creators. As a result of her newfound success, Sim-Wise decided to turn her talents to consulting up-and-coming content creators.

Sim-Wise is also active on social media, recently returning to Instagram (@alexsimwise) after a period of inactivity. You can also follow the model on Twitter @SimWise as well as @secretsimwise for her adult content.