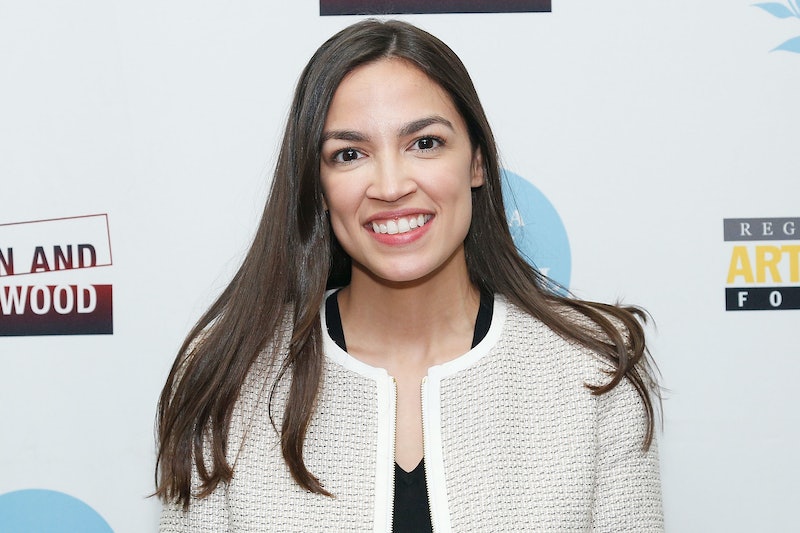 Cardi B and Megan Thee Stallion's "WAP" just got a whole new meaning. Alexandria Ocasio-Cortez reacted to Cardi B's presidential endorsement by referencing her new track, but not in the way you think. Ocasio-Cortez dropping a "WAP" reference all started with Cardi endorsing the New York Democratic U.S. Representative for president.

On Aug. 14, the politician revealed on social media she is once again getting braces. Ocasio-Cortez explained she had them when she was younger, but couldn't afford a retainer after, so she's going through the process again. The 30-year-old also gave a detailed explanation about dental care inequalities in the country. Better yet, she did all of this while dancing to Cardi's "Bodak Yellow" and quoting the song's lyric, "I got a bag and fixed my teeth." As she raps in the song, Cardi got her teeth fixed after becoming a successful rapper.

Ocasio-Cortez's Instagram Story eventually got Cardi's attention, who ended up tweeting on Aug. 15, "She better run for president when she turns 35." (A U.S. presidential candidate must be 35 or older, per the U.S. Constitution.) Ocasio-Cortez responded to the award-winning rapper, "Women Against Patriarchy (WAP) 2020." Yes, AOC put her own unforgettable spin on "WAP."

If you're unaware, Cardi previously revealed that "WAP" has a very different meaning than "Women Against Patriarchy." It stands for "wet *ss p*ssy," she sad in a recent interview (via Boston's Hot 96.9). "The song is really nasty. The song always been nasty," she said.

This isn't the first time Ocasio-Cortez has quoted Cardi. In 2018, she tweeted lyrics from the rapper's jam "Best Life." Seeing as both the representative and the rapper have risen to the top and grew up in the Bronx, they seem to relate in more ways than one.

Now, as for whether or not Ocasio-Cortez will ever run for president, she said during a March 2020 Instagram Live, "I want to level with all of you, I’m not a person that aspires to a position, I aspire to a mission. We can’t swing from one savior to another. There’s a lot of savior-ism in politics, like 'Who’s next?' and 'Who’s gonna save us?' And the answer is you. The answer is people." Well, if she ever does run for president, she already has Cardi's support and possibly even a new campaign slogan.