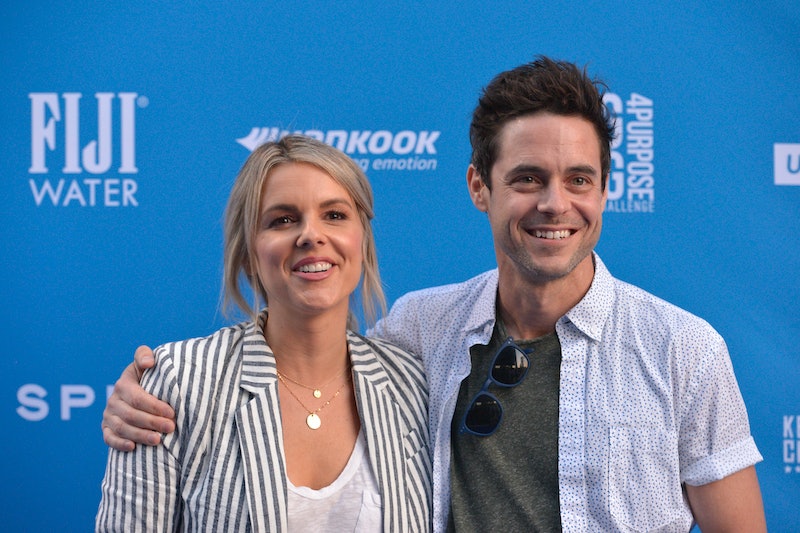 Ali Fedotowsky didn't meet her husband on The Bachelorette, but the franchise played a small role in getting them to cross paths. After things didn't work out with her final rose winner Roberto Martinez, E! news reports that Ali met her now-husband Kevin Manno through a producer she worked with on her travel show 1st Look. Ali had been an advertising executive at Facebook before going on The Bachelor, and if it weren't for the show giving her a way into the entertainment industry, it's likely that she wouldn't have met Kevin, who is an on-air host and radio DJ.

Ali told E! News that she and Kevin were friends for a long time before things took a romantic turn. According to Entertainment Tonight, they welcomed their daughter Molly in 2016 after a few years of dating. They'd actually planned to get married in Mexico a month before Molly was born, but postponed the wedding due to Zika virus concerns, ET reported. Instead, they walked down the aisle in early 2017. According to Us Weekly, the guest list included celebs like Haylie Duff, Kaley Cuoco and Lacey Chabert as well as fellow Bachelor alum Andi Dorfman. A year after their wedding, Ali and Kevin's son Riley was born.

Since then, Kevin and Ali have been focused on balancing work and parenting, which got significantly tougher when coronavirus hit. As Ali explained on her Instagram stories, Kevin began taping his radio shows from home, which meant she had to pretend that he actually left the house so the kids wouldn't distract him. Like many people in quarantine, the couple has also taken up gardening. Ali now delights in showing her Instagram followers her strawberries and tomatoes as they bloom.

The rest of her posts are generally lighthearted, though she did reveal in mid-July that she'd experienced a miscarriage. "I'm not sharing this bc I feel sorry for myself or I want others to tell me they feel sorry for me." she wrote on Instagram. "I'm writing this post to let others know who have experienced pregnancy loss know that I see you & feel you ... So know that if you’re going or have gone through this, your feelings are valid - whatever they may be."

As Ali recovers from that loss, she's been posting a lot of photos of her kids, her puppy, her garden and Kevin. She's also preparing to watch The Bachelor: The Greatest Seasons — Ever revisit her Bachelorette episode, saying in her Instagram stories that she saw a preview and was already cringing from embarrassment. Kevin, meanwhile, can't wait to watch.

More like this
This 'Bachelor' Contestant Got Back With Her Bachelor Nation Boyfriend After Going Home
By Grace Wehniainen
Rachel Responded To 'Bachelor' Fan Theories About Her TikTok With Clayton
By Grace Wehniainen
Kaitlyn Bristowe Said Chris Harrison Ignored Her After Her 'Bachelorette' Hosting Gig
By Grace Wehniainen
Zach Addressed His "Boring Bachelor Energy" After His Group Date With Latto
By Grace Wehniainen
Get Even More From Bustle — Sign Up For The Newsletter
From hair trends to relationship advice, our daily newsletter has everything you need to sound like a person who’s on TikTok, even if you aren’t.