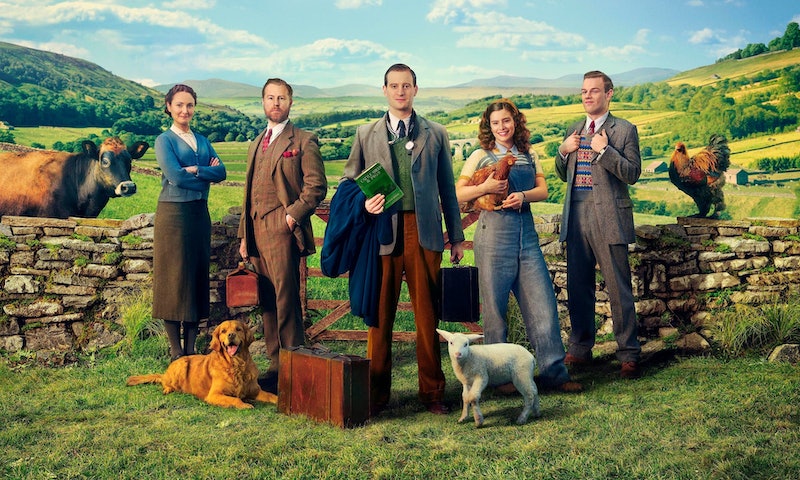 Based on the memoirs of British veterinary surgeon and writer James Herriot, Channel 5's adaptation of All Creatures Great and Small follows the story of a local vet working in rural Yorkshire during the 1930s and 40s. The reboot of the original BBC series, which first began airing in the 1970s, is set within the fictional Yorkshire village of Darrowby. But where is All Creatures Great and Small filmed?

As the Radio Times reports, the Channel 5 drama was largely filmed in the village of Grassington, situated in the southern part of the Yorkshire Dales. Filming took place in late 2019, and various period buildings in the local area, including The Devonshire pub, were used as a backdrop throughout the series. Other local Grassington locations utilised during filming include the Walker's bakery and chocolatier, The Rustic Rabbit gift shop, women's shoe shop Helen Midgley, The Stripey Badger bookshop, and more, the Yorkshire Post reports.

Elsewhere, interior shots of the fictional Drovers Arms pub were filmed at The Green Dragon Inn in the North Yorkshire village of Hardraw, whilst the Grade I-listed Broughton Hall near Skipton and the Malham Lings beauty spot were also used during filming of Channel 5's latest offering. One of the few filming spots outside the Dales to be included was the historic Keighley and Worth Valley Railway line, nestled in Worth Valley, West Yorkshire.

Speaking to the Radio Times, actor Rachel Shenton, who plays the character of Helen Alderson in All Creatures Great and Small, revealed how the "willingness" and "enthusiasm" of Grassington locals was very much appreciated by the cast and crew throughout production, adding "we couldn’t have wished for more.” Director Brian Percival also commented on the drama's setting, and discussed how the county of Yorkshire became a character in itself.

“It is completely integral. As this is a drama, with some funny bits in it, one of the most peculiar things only to Yorkshire, apart from the beautiful landscapes, is that rather cynical sense of humour. I just loved that right from the off." Speaking to the publication during a virtual press event, he added: "They will build you up in one line and then destroy you straight away. It is done in such a delicate, kind and loving way but it so funny. That is the place. It is why people return there and you tend to get such a warm-hearted place — particularly in the Dales.”

All Creatures Great and Small airs on Tuesdays at 9 p.m. on Channel 5.

More like this
9 Time Catherine Cawood Was An Absolute Badass In Happy Valley
By Sophie McEvoy
'The Last Of Us' Has Officially Been Renewed For Season 2
By Darshita Goyal
'Abbott Elementary' Fans Probably Missed This 'Parent Trap' Easter Egg
By Sam Ramsden
Everything To Know About The 'Daisy Jones & The Six' TV Series
By Maxine Harrison and Brad Witter
Get The Very Best Of Bustle/UK
Sign up for Bustle UK's twice-weekly newsletter, featuring the latest must-watch TV, moving personal stories, and expert advice on the hottest viral buys.