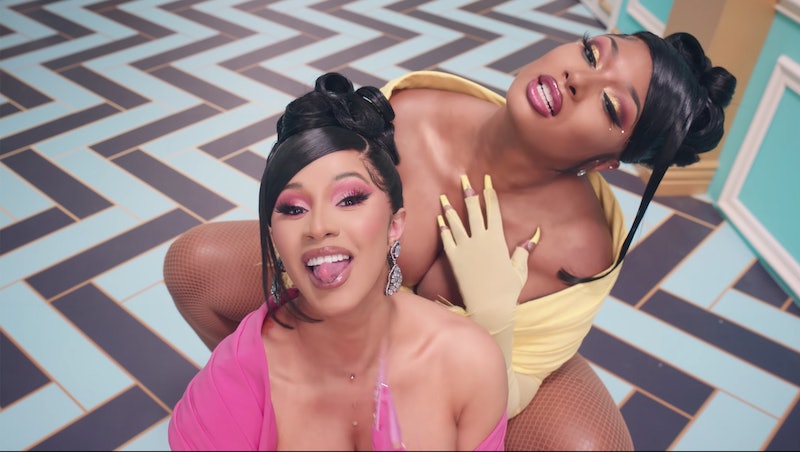 These may be unusual times, but Cardi B and Megan Thee Stallion are still having a Hot Girl Summer — and they're inviting some of their famous friends to the party. The pair released their first musical collaboration on Friday, August 7, and all the cameos in Cardi B and Megan Thee Stallion's "WAP" music video prove that the pair know how to throw the sexiest party any candy-colored mansion has ever seen.

In addition to the two rappers, the "WAP" video features stars like Kylie Jenner, Normani, and Rosalia, all dancing and posing in rooms that match their fashion-forward ensembles. During an interview with Apple Music ahead of the video's release, Cardi revealed that she chose women she admired to take part in the sexy clip. "I wanted a lot of different females, not just female rappers," she explained.

"Y'all going to see it on the music video as well, from models to influencers and everything. And I really wanted the video to be very sexy, very clean, very nice, very cut." As for the other musicians that Cardi chose — which include up and coming rappers like Rubi Rose, Sukihana, and Mulatto — she revealed that she wanted to help introduce them to a wider audience. "I'm like, 'These are the girls that I personally like. That I like they music. That I really feel they are going to go mainstream, to me.'" Here are all of the women Cardi asked to take part in "WAP":

The "Motivation" singer appears about three and a half minutes into the clip, showing off some of her best dance moves in a houndstooth covered ballroom. Normani celebrated her appearance in the video on her Instagram Story, where she shared the video along with several heart emojis.

The Kylie Cosmetics founder landed the most prominent cameo in the "WAP" video, which features her strutting down a hallway in a skimpy, leopard-print leotard with a matching cape and elbow-length gloves. Jenner's dramatic appearance — which comes about halfway through the video — sees her flipping her hair before disappearing behind one of the doors of Cardi and Megan's mysterious mansion. "Congrats Cardi B and Megan Thee Stallion!" Jenner wrote on her Instagram Story shortly after the videos' release, along with a link encouraging her followers to "watch the video and stream 'WAP'".

The Spanish singer channeled her inner Britney Spears for her brief cameo in the video, rocking a red pleather catsuit in an appropriately red-and-gold accented dressing room. She capped things off with an elaborate headpiece, which was designed to look like braids wound around her head, and her signature long nails, with dangling gold accents.

The up-and-coming Atlanta rapper struck a pose in a teeny, blue latex ensemble in the "WAP" video, in a room designed to look like some kind of nightclub. Mulatto shared a clip of her cameo on Instagram, where she thanked Cardi and Megan for letting her be a part of their project. In addition to a shoutout from the "Bodak Yellow" rapper, Mulatto also shared a tweet from Normani on her Instagram Story, where the singer wrote simply, "I love Mulatto."

The rapper and Love & Hip Hop star appeared near the end of the video, dancing in the nightclub room in a nude-colored ensemble. She shared a video of herself watching the clip for the first time on Instagram, where she encouraged her fellow musicians to "serve the m*therf*cking areas" with their performances. "Bitch I’m tew hype!" Sukihana captioned the post — and she was even more hype a few hours later when Kim Kardashian liked the post and video.

The "Big Mouth" rapper rocked an all-red, superhero-inspired ensemble for her cameo at the end of "WAP," which she showed off in a video she shared on Instagram shortly after the clip was released. "Cardi a real asss b*tch," Rubi Rose wrote on her Story, where she reposted a video of Cardi B thanking all of the women who contributed to the video.

More like this
Miley Cyrus' "Flowers" Lyrics Reveal She’s Done With Liam Hemsworth For Good
By Jake Viswanath
Zach Gilford Admits He Forgot Taylor Swift's Name When He Starred In Her Music Video
By Jake Viswanath
Kylie Jenner Clarified How To Pronounce Her Son's New Name
By Jake Viswanath
Kim Kardashian & Kylie Jenner Squabble Over Skims On Instagram
By Alyssa Lapid
Get Even More From Bustle — Sign Up For The Newsletter
From hair trends to relationship advice, our daily newsletter has everything you need to sound like a person who’s on TikTok, even if you aren’t.