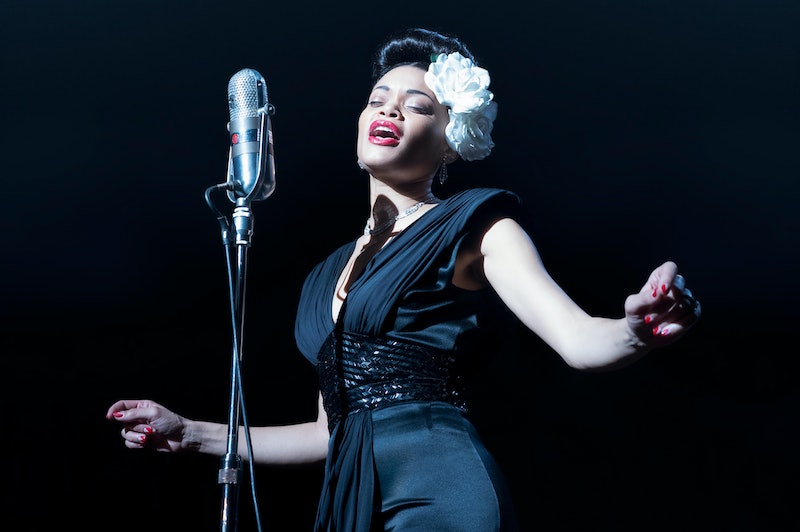 In the film The United States vs. Billie Holiday, now streaming on Hulu, singer Andra Day transforms herself into the iconic jazz singer and recreates some of Holiday's most famous performances. The story tells of Holiday's relationship with agent Jimmy Fletcher and the Federal Bureau of Narcotics' obsession with stopping her from singing the song "Strange Fruit" publicly; a song that is said to have been a catalyst for the beginnings of the Civil Rights movement, and which was named Song of the Century by TIME Magazine.

To highlight Day's own superb singing voice and make the film more authentic, Day re-recorded many of Holiday's most popular songs. The resulting album isn't just a soundtrack for the film but a look back at Holiday's repertoire with a few new elements thrown in. Inspired by "Strange Fruit," Day wrote a new song called "Tigress and Tweed." As Day explains in the film's press notes, "I was thinking that if Billie Holiday was with us today, how would she have wanted to see 'Strange Fruit' evolved for what it is that we need now. And if that scares people, and makes them uncomfortable, then I'm OK with that. I really wanted this song to be something that motivated people and that reminded them that we do have power to move things forward."

You can listen to Day's version of Holiday's songs on the full soundtrack album for The United States vs. Billie Holiday on Spotify, as well as some new songs including "Tigress and Tweed." And for more immersion into Holiday's repertoire, her original songs used in the film are listed below.

1. "All Of Me" Written by Seymour Simons and Gerald Marks

4. "I Cried for You" Written by Gus Arnheim, Arthur Freed, and Abe Lyman

6. "Them There Eyes" Written by Maceo Pinkard, William Tracey, and Doris Tauber

9. "Gimme a Pigfoot and a Bottle of Beer" Written by Wesley A. Wilson