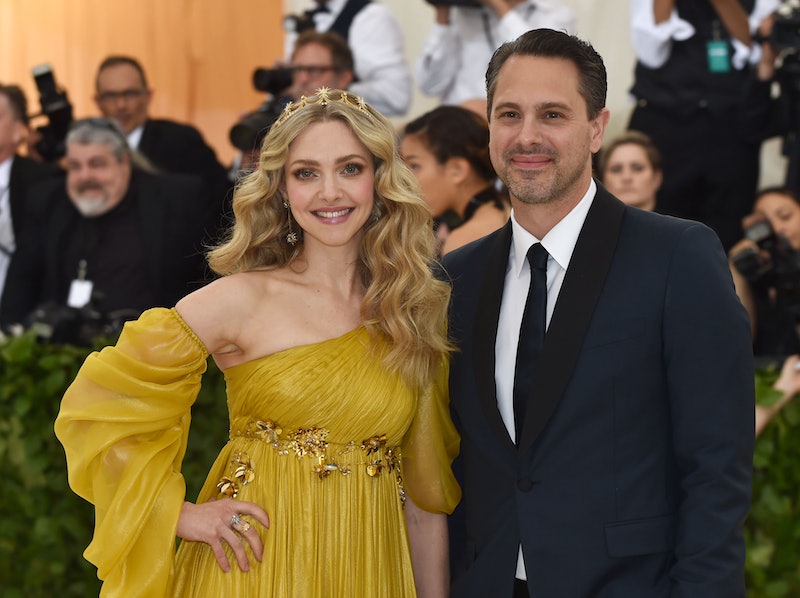 Not even Karen Smith (and her weather-forecasting breasts) could have predicted this big news. Amanda Seyfried secretly welcomed her second child with husband Thomas Sadoski, giving birth to a baby boy. The couple used their announcement to spotlight INARA and War Child USA on Monday, Sept. 28, sharing the first photo of their newborn son via the organization's Instagram.

"We are so happy to join with @warchildusa to be the first to announce that our board members @mingey and @thomas_sadoski welcomed their second child into this world," INARA wrote in an Instagram post. The organizations provide assistance to children affected by war, which is a cause that the couple has become passionate about. "Since the birth of our daughter 3 years ago our commitment to the innocent children that are so brutally effected by conflict and war has been a driving force in our lives," Seyfried and Sadoski said in a statement shared on the same account, along with a photo of their newborn. "With the birth of our son the work of INARA and War Child has become our North Star.”

The news comes as a huge surprise, given that Seyfried didn't even announce that she was pregnant this year. The couple refrained from revealing the name of their new son or disclosing when she actually gave birth. Bustle has reached out to representatives of Seyfried for comment, but did not receive an immediate response.

Seyfried and Sadoski are also parents to three-year-old daughter Nina, who was born in March 2017. The couple started dating in 2015, after meeting while working on the off-Broadway play The Way We Get By. They married in a secret ceremony in March 2017, as Seyfried was nine months pregnant with their first child.

A year ago, in August of 2019, Seyfried spoke about her desire to have another child, telling People that she didn't see a second child in their immediate future. “I want to get pregnant again, but I’m not ready just yet to have a second,” she said. “I would like my daughter to be in school and then have my own time with a new baby. But it’s so hard to plan.”

While pregnant, Seyfried's family has been quarantined at a modern farmhouse in Upstate New York and living with an unexpected guest: her mom, who has become her daughter's "nanny," as the actor called it. "My life is awesome because she is the third parent for us," she said on the YouTube series Molner's Table. "So when my daughter gets up, she either comes in our room or she goes downstairs. And if we're still sleeping, it's great, 'cause she can hang out with my mom. She wakes up early."

More like this
4 Surprising Celeb Throuples That Got The Internet Talking
By Sophie McEvoy
Paul Rudd’s Secret To Eternal Youth Is Something You Can Try At Home
By Darshita Goyal
Channing Tatum “Nearly Killed” Salma Hayek During 'Magic Mike' Lap Dance
By Sam Ramsden
Michaela Coel Has Some *Thoughts* About The Nepo Baby Discourse
By Maxine Harrison
Get Even More From Bustle — Sign Up For The Newsletter
From hair trends to relationship advice, our daily newsletter has everything you need to sound like a person who’s on TikTok, even if you aren’t.