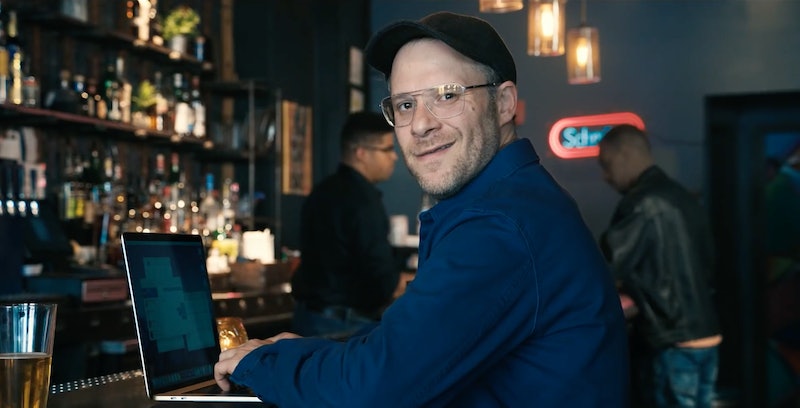 What would it be like to be frozen in time and wake up 100 years in the future? An American Pickle (available on HBO Max now) explores exactly that concept, taking an immigrant hailing from Poland in the 1920s and dropping him into 2020. But before it was a film, An American Pickle was a 2013 New Yorker novella called "Sell Out" by Simon Rich that had quite a bit to say about New York City's rapidly shifting landscape and population.

An American Pickle the film follows the story of Herschel (Seth Rogen), an immigrant new to America, who falls into a large vat of pickle brine at the factory where he works in 1920. The pickle brine ends up preserving his body, and Herschel wakes up 100 years in the future in 2020. He's the epitome of a fish out of water, and he finds himself struggling with how much the world has changed in the past century. Helping him deal is his great-great-grandson, Ben (also Seth Rogen), whose decidedly yuppie, "modern" sensibilities make him a bit of a sharp contrast to Herschel's old world wisdom.

Looking to An American Pickle's inspiration in The New Yorker sheds some more light on the story and its subtle commentary on the privilege of modern America. "Sell Out" is a four-part serialized novella that originally ran in The New Yorker's humor section, Daily Shouts, back in 2013. The story beats between the two seem to be fairly similar and that should be no surprise, given that Rich also wrote the screenplay for An American Pickle.

"Sell Out" is packed with more than a few critiques of modern life, including a withering look at the internet and our sometimes overblown reactions to suddenly not having access to it. And with An American Pickle, audiences can expect more of the same, but with an interesting undercurrent of coping with loss and reconnecting with family. "Sell Out" also focuses on Jewish tradition and prayer, with Herschel finding ways to convince Simon to reconnect with that part of himself.

A year after "Sell Out" was published, Rich spoke with Longreads about his process writing "Sell Out," and its origins. "At least since college, I’ve been thinking and writing about the kinds of conversations I might have with my ancestors if they saw how frivolous and privileged my life was," he shared. "And the shame and guilt packed into those conversations always made me laugh." It's in those self-conscious feelings that he would find the key to the story and its main character, Herschel. "Ultimately I had to step back and ask myself, 'What is making you laugh about this? What is compelling you to write this, what emotion is driving this?,'" he said. "And it really was guilt and shame. And so I thought, if that’s what this is really about, then I need to have that ancestor looking directly at me. I need to give him the power and give him the agency."