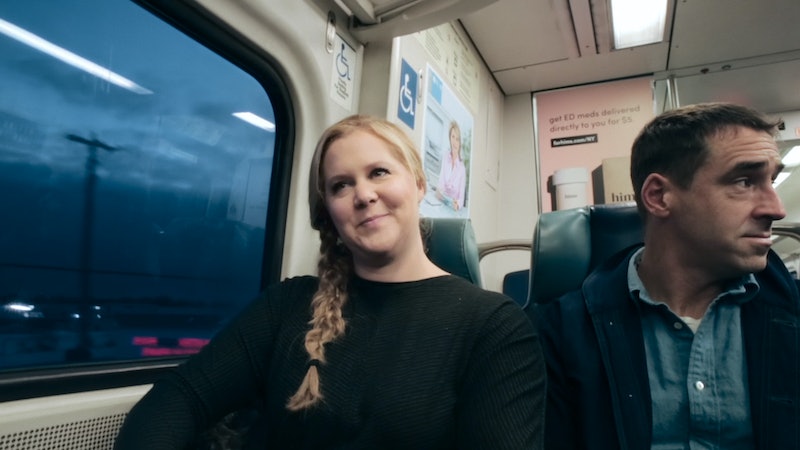 During her 2019 Netflix special Growing, Amy Schumer revealed that her husband, Chris Fischer, is on the autism spectrum. "I knew from the beginning that my husband's brain was a little different than mine," she explained. "And once he was diagnosed, it dawned on me how funny it was, because all of the characteristics that make it clear that he's on the spectrum are all of the reasons that I fell madly in love with him."

The comedian's new HBO Max docuseries, Expecting Amy, takes viewers inside the months leading up to and after Fischer's diagnosis. During that time, Schumer was pregnant and dealing with severe nausea from a condition called hyperemesis gravidarum, and the show is first and foremost a testament to the way she balanced her career and personal life during an excruciating pregnancy. But it's also a tribute to her relationship with Fischer and the deep understanding they've grown to have of one another. It was Schumer, after all, who encouraged him to get tested.

"You have paid attention to my behavior in a way that nobody had before, and noticed things because you're very observant and kind of put together the pieces," the chef tells his wife at one point.

Expecting Amy depicts some of the behavior Schumer noticed, such as Fischer being unaware of his facial expressions, not making sustained eye contact, and being honest to a fault. As Schumer jokes in one of her stand-up sets, Fischer has no problem telling her she looks "like sh*t" when she asks for his opinion on an outfit. "But then also, when he tells me I look beautiful, I know he really means it," she says.

In Episode 2, Fischer explains that his family never fought growing up, largely because they just avoided talking about their issues. As a result, he never really learned how to communicate effectively or have productive arguments. This trickled into his relationship with Schumer. "I wouldn't know how to communicate with him," Schumer recalls in the series. "And we would kind of hit a dead-end."

Of course, Schumer's upbringing also impacted their relationship. She says that she's always made fun of people as a means of affection, but that it sometimes comes across as mean to her husband. She had a hunch that he was on the spectrum and knew she needed to do better too, but says she wanted help knowing what to do.

"Our arguments are generally never malicious; they become emotional because we're not listening," Fischer tells the camera. "One of us isn't understanding what the other person's saying. It's an inability to communicate."

After Fischer was diagnosed, things changed. Their ASD specialist, Dr. Kimberly Gilbert, helped the couple explain what behaviors upset each of them and gave them tools to handle disagreements. "[Getting diagnosed has] been very empowering," Fischer says. "And this morning I woke up so happy and grateful. The more I understand about it, the more excited I am."