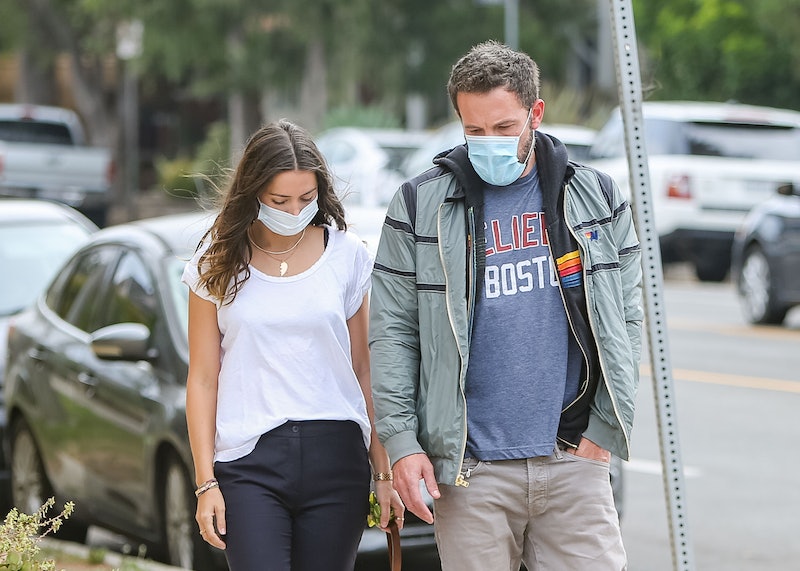 Watching Ana de Armas and Ben Affleck's relationship blossom has become everyone's favorite quarantine pastime, given how they're practically the only celebrity couple that can almost always be seen outside on a daily basis. And yet, they have rarely acknowledged each other publicly, on social media or otherwise, until now. Ana de Armas shared a rare selfie with Ben Affleck on Instagram on Sunday, August 16. And truthfully, you should just be shocked (or grateful) that the sweet photo wasn't taken at Dunkin'.

The Knives Out star posted a black-and-white snapshot of the two, seemingly in celebration of Affleck's 48th birthday, captioning the photo with double heart emoji. According to PEOPLE, de Armas gifted her new beau with a new BMW motorcycle, which they were spotted riding together over the weekend. They even sported matching helmets, and if that doesn't prove how in love they are, nothing will.

The two reportedly met on the set of their upcoming thriller Deep Water, where they play a couple dead-set on destroying each other, and were first linked romantically in March when they were spotted on a trip to her native Cuba. Affleck and de Armas became Instagram official back in April, when de Armas posted photos of them on what seemed to be a desert getaway to celebrate her 32nd birthday. “Thank you all so much for the birthday wishes and love!," she captioned the post. "Cheers to another great year."

Since then, the pair has unexpectedly become the "it" couple of quarantine, after repeatedly being captured by paparazzi strolling outside amidst the coronavirus pandemic. True to his New England heritage, Affleck and de Armas have often been spotted on Dunkin' runs and taking their dogs out on walks, mostly with masks on. But when they fail to do so, the iconic Twitter stan account Ana de Armas Updates is always there to shame them for not wearing masks. The account were even blocked by their idol herself for their jokes, but they continue to update fans on the actor anyways, joyfully sharing the couple's latest selfie and even noting which of de Armas' Knives Out co-stars liked the recent pic.

The couple has not spoken of each other publicly — well, aside from Affleck jokingly demanding photo credit on one of Armas' Instagram slideshows back in March, as any self-respecting Instagram boyfriend would. But as a friend of theirs reportedly told PEOPLE, Affleck and de Armas are getting pretty serious. "They are enjoying their time together," the source said. "He makes her laugh and she’s a great influence. They safely visit with his family and he works to make sure he is healthy and present for his family."