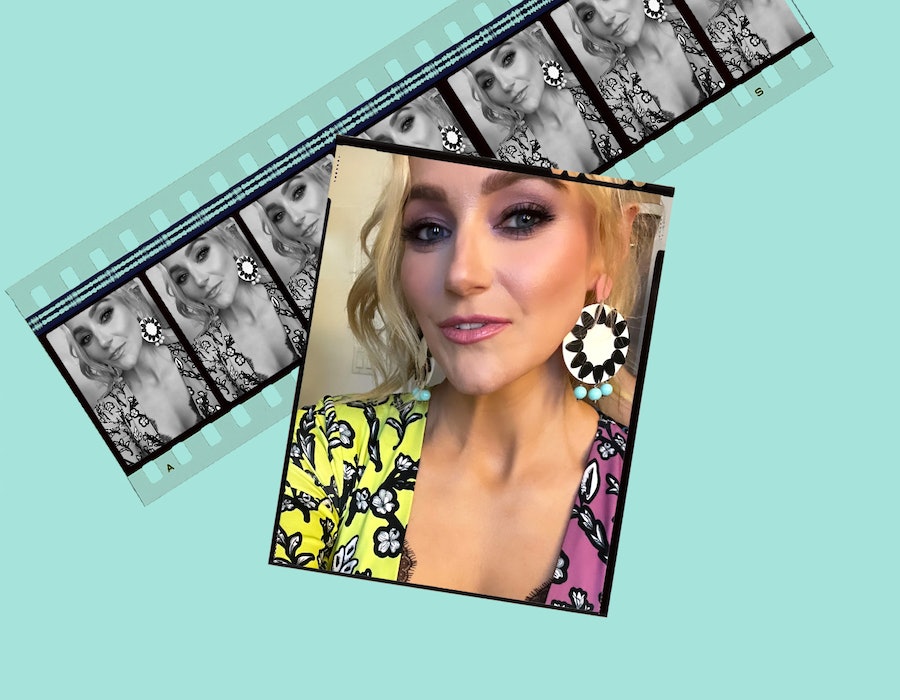 Glitter follows Betsy Wolfe everywhere these days. The actor is performing eight times a week in the new Broadway musical & Juliet — a clever, confetti-filled remix of Romeo and Juliet soundtracked by your favorite pop hits — and the sparkly stuff hangs around long after she’s left the stage. “I don’t even want to tell you where I’ve found glitter,” she says, joking. “My house is now full of it, almost as if glitter is just part of the floors.”

But it’s fitting for & Juliet, whose ubiquitous songs from Swedish mega-songwriter Max Martin have just as much staying power. The musical’s 30-plus hits include boy-band choruses of “I Want It That Way,” kiss-off anthems like “Stronger” and “Since U Been Gone,” and a rousing version of Bon Jovi’s “It’s My Life.”

The story takes the doomed romance of Romeo and Juliet and wonders… what if Juliet hadn’t died at the end? Wolfe, 40, poses that question as Anne Hathaway, the wife of William Shakespeare (played by Kinky Boots alum Stark Sands), then seizes her husband’s quill as the couple joust for literary control throughout the show.

“This was the first time in a long time that I read a script and didn’t feel like, structurally, the female character was undervalued,” says Wolfe, who provides heart and comic relief as William and Anne’s collaborative writing exercise becomes a way for them to address their marital woes. “She doesn’t know how to get what she wants in her [marriage], and this is the way she and Shakespeare figure out how to get what they each want.” (The book comes from Schitt’s Creek writer David West Read.)

This type of female character has been a backbone in much of her work. After making her Broadway debut in the 2007 revival of 110 in the Shade, Wolfe delivered lived-in performances as Waitress’ lovelorn Jenna and Falsettos’ Cordelia, the cheery caterer and one half of the “lesbians next door.” After doing five Broadway shows in quick succession, she took a five-year hiatus, which included both the pandemic shutdown and the birth of her daughter.

It was & Juliet’s message that brought her back to Broadway. “It’s this beautiful idea that life isn’t going to go the way you planned. It really resonated with me, that you can still make something beautiful out of what you’re given,” Wolfe says. “I see kids in the audience [who are] 6 or 7 years old, all the way up to people in their 80s, and there’s a genuinely universal response of like, I am so happy I just saw that. It brings me a lot of joy to be part of that every night.”

Below, learn more about Wolfe in her Bustle Booth questionnaire.

What are the saved weather locations in your phone?

[Most of these] are from my honeymoon: Positano, Barcelona, Portoferraio, Amalfi, New York, Venice, Corfu, and where my parents live [in California].

Gemini! And I’m such a Gemini.

What’s one movie or TV show that you're currently obsessed with?

Some Real Housewives, or I would be a Kardashian sister.

After being in this show, I’ll have plenty of songs I could do, but you will not find me in a karaoke place. I hate karaoke.

What’s something you’d want people to say about you?

That Betsy is really funny, but most importantly kind.

More like this
Hailee Kaleem Wright's Topsy-Turvy Path From MTV To Broadway
By Samantha Leach
'That '90s Show' Star Callie Haverda Got Advice From Mila Kunis & Ashton Kutcher
By Brad Witter
At 28, Rosie Perez Risked Her Career To Stop Playing Stereotypes
By Gabrielle Bondi
At 28, Debra Jo Rupp Was Living A Much Different '70s Show
By Grace Wehniainen
Get Even More From Bustle — Sign Up For The Newsletter
From hair trends to relationship advice, our daily newsletter has everything you need to sound like a person who’s on TikTok, even if you aren’t.