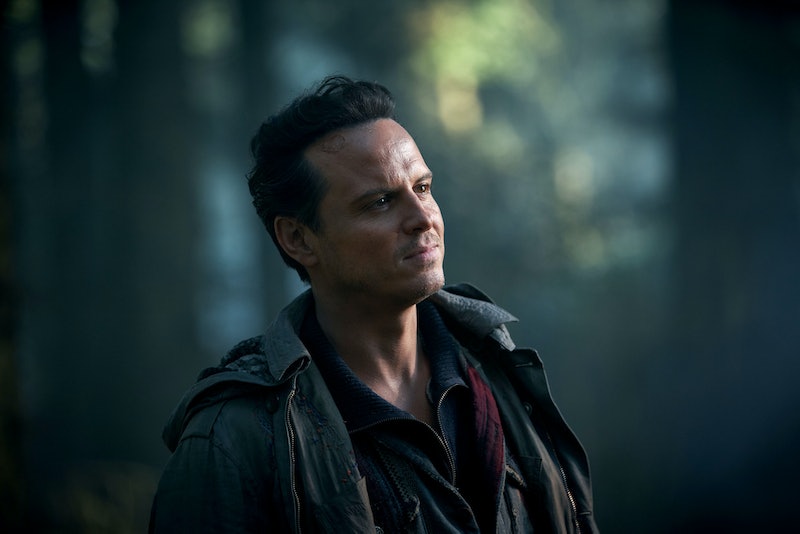 After weeks of teasers and whisperings that your favourite Hot Priest would be returning to our screens, Andrew Scott made his first proper appearance in His Dark Materials on Nov. 29. He plays the mysterious Stanislaus Grumman aka Jopari aka John Parry. Fans of the Phillip Pullman adaptation were overjoyed to see that it was aeronaut Lee Scoresby (played by Hamilton’s Lin-Manuel Miranda) who introduces Scott to the series. In fact, viewers felt all sorts of ways about John Parry’s big entrance. Prepare for the thirst, here’s some of the best Twitter reactions to Andrew Scott in His Dark Materials.

Scott’s character enters the show to join Lee Scoresby on his quest to find the person who currently has the Subtle Knife, a weapon which allows the bearer to cut holes into other worlds. It’s not yet clear if Lyra will meet Scoresby and Parry as she moves between different worlds but right now Will Parry (played by Amir Wilson) son of John Parry, currently has the knife but is going to have to fight to keep it.

Scott has been dropped right in the middle of the action and it wouldn’t be His Dark Materials if he didn’t have a daemon alongside him. Fans of Fleabag have serious cause for excitement as Sayan Kötör, an osprey, is voiced by Scott’s former castmate and Fleabag creator Phoebe Waller-Bridge.

To say that fans had some thoughts and feelings about John Parry is an understatement, so here are some of the best Twitter reactions to Andrew Scott’s entrance:

Before Scott appeared in season two of His Dark Materials it was hinted that he’d be joining the cast. In the run up to episode four fans could barely handle the excitement with one suggesting that the episode should come with a formal warning.

The Thirst Was So Real

Since the kneel scene in Fleabag (don’t pretend you don’t know what I’m talking about) Scott has gained more than a few crushes. This propensity to get heartbeats racing has followed him into His Dark Materials. The festive period has barely begun but Christmas has truly early for Scott fans.

The Power Of The Hot Priest Lives On

John Parry may be nothing like the Hot Priest in Fleabag but that didn’t stop fans reminiscing about tins of G&T in the clergy house and a fear of foxes.

The excitement of Scott’s big entrance was heightened by the fact that he’s sharing the screen with Hamilton’s Lin Manuel-Miranda. The pair are on a mission together to find the Subtle Knife and it’s proving more than some viewers can cope with.

The Reunion You Didn’t Know You Needed

As season three of Fleabag came to an end I swallowed the bitter pill that I wouldn’t be able to watch Scott and Phoebe Waller-Bridge’s incredible onscreen chemistry anymore. However, keen-eared fans caught on that Waller-Bridge voices Scott’s daemon in His Dark Materials and it made for a very welcome surprise.

Scott has firmly placed himself as British TV royalty. He’s got range. And fans were impressed once again by his skills in His Dark Materials.

More like this
Nazanin Boniadi Was A Healer Long Before 'The Rings Of Power'
By Olivia-Anne Cleary
Gavin Drea Is Just As Funny Off Screen As His 'Wedding Season' Character Is On Screen
By Darshita Goyal
Harry Lawtey Is Weighing Up The Price Of Success
By Olivia-Anne Cleary
How A Location Blunder Changed The Outcome Of 'The Capture' S2.
By Darshita Goyal
Get The Very Best Of Bustle/UK