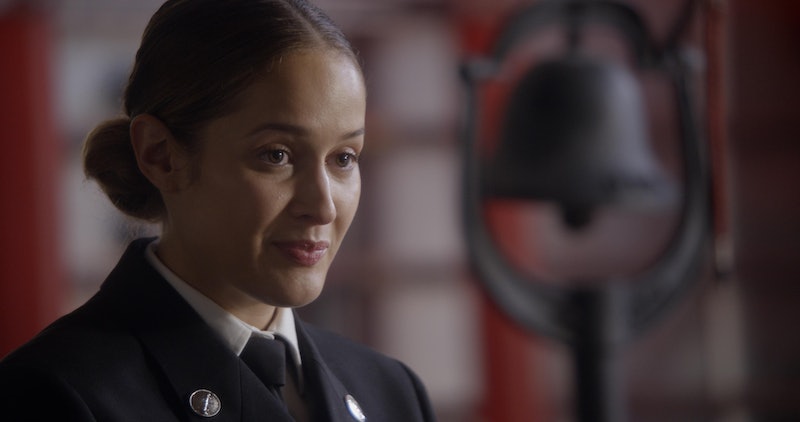 The Station 19 Season 3 finale included a big reveal for Andy Herrera: her mom, Elena, is actually still alive. Andy believed for most of her life that when she was 9, her mother (who was also a firefighter until she got pregnant with Andy) got sick and died. The last time Andy saw Elena, she'd pulled her out of school to get ice cream and go to the park on one last special day together. Her mom "died" shortly afterward. But that's just the story her father told her.

As Andy sorted through her dad's things after his death in Season 3, she started to piece together that something wasn't adding up. So she called her Aunt Sandra, her mother's sister, for information. Eventually Sandra agreed to meet with her, and Andy's mom joined them. That's where the season ended, but Season 4 promises to answer more questions about Andy's mom and why she seemingly faked her own death.

Showrunner Krista Vernoff told TV Line that Elena's reappearance will have a massive impact on Andy. "There's so much unsaid, so much unknown," she said. "What happened? Why did her father tell her her mother was dead? What happened between [Pruitt and his wife] is such ripe, fertile ground for Season 4."

Executive producer Paris Barclay added to TV Insider that Andy will undoubtedly be upset that her father lied to her, but while things "will be complicated," they won't be "devastating in the way that viewers might expect." But Jaina Lee Ortiz, who plays Andy, has a different take. "If everyone thinks Andy's already been to hell and back they ain't seen nothing yet!" she teased to Entertainment Weekly.

The synopsis for the Station 19 Season 4 premiere reveals that fans will learn more about Elena right off the bat as "Andy tries to make sense of her mother's return," so buckle in for a messy season premiere.