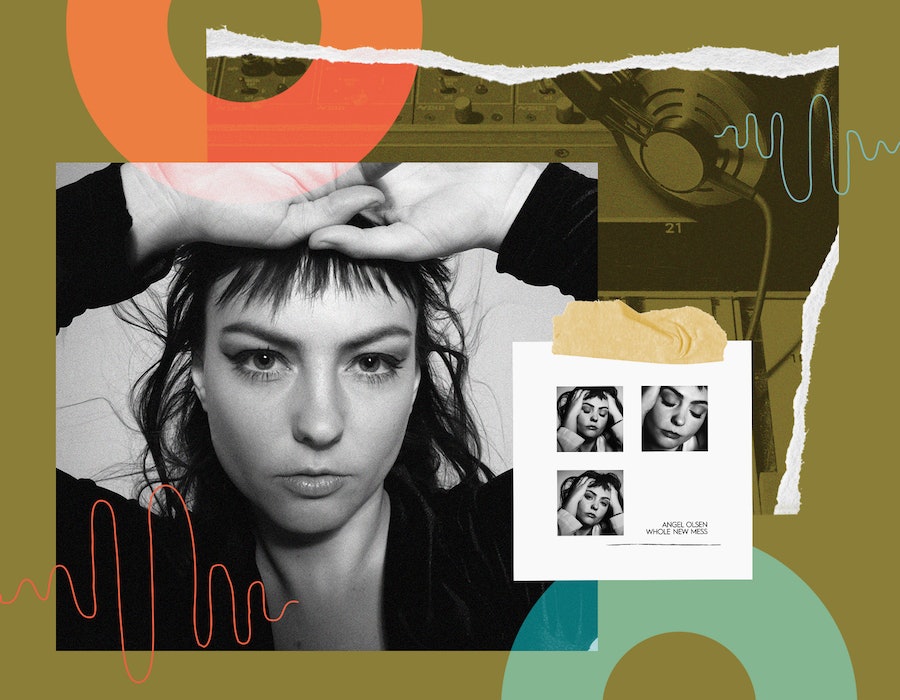 There are myriad ways to deal with a breakup. You can retreat and spend time alone reflecting on the loss of a partner. Or you can create high drama out of the dissolution of the relationship, crafting a narrative that's as juicy as it is painful. In the past year, Angel Olsen has done both of those things. Eleven months ago, the 33-year-old singer-songwriter first released her maximalist fourth studio album All Mirrors, which topped multiple critics' year-end lists as one of the best albums of 2019 and landed her on the cover of The New York Times Magazine. With her powerful voice soaring over arrangements for a 14-piece orchestra, the album turns heartbreak into the best kind of melodrama, though it represents a departure from the intimate folk that Olsen got her start performing.

Olsen's latest release Whole New Mess, then, is the St. Louis-born singer's expression of quiet heartbreak and a return to her roots, a stark, stripped down counterpoint to All Mirrors. It's the cabin in the woods to the latter's bombastic symphony, featuring the initial solo recordings of the songs that made the 2019 record (plus some previously unreleased tracks), without the band and string accompaniments that were added later. Recorded in a church in Washington State while Olsen was holed up writing in a rental nearby, the result is a collection of emotionally raw sketches that invert All Mirrors' melodrama, laying the songs' core heartbreak almost excruciatingly bare.

"I was still dealing with a lot of the stuff I was singing about when I recorded Whole New Mess, and it’s hard for me to hear that," Olsen tells Bustle of listening to it back. "I have a hard time listening to those recordings, not because I’m disappointed [in them] but because I can hear that in my voice."

While quarantine may feel like the perfect time to sit at home and listen to an album of stark ruminations on a love gone sour, Olsen is emphatic that the timing of Whole New Mess' release is coincidental. "A friend of mine told me the other day, 'What apt timing for you to release this record,'" Olsen says with a laugh. "And I was like, 'Misery’s always in vogue!' You know? There's always something going on."

Below, Olsen muses on Tori Amos, dealing with trolls, and the song she'd want to play at her wedding.

On Hecklers & Playing The Hits

Is there a song you never want to play live again?

I mean, yeah [laughs]. Which one? But it’s really not up to me. At this point I’m deep enough in my career to realize my music isn’t necessarily about what I like. I mean, it starts with songs that I like and that I want to promote and that I get into and want to put out in the world… I could choose not to play all the ones that I don’t like, but that would be making it all about me.

So what’s your version of how Radiohead hates playing “Creep”?

I don’t know. For awhile it was "Hi-Five;" some days it’s like I really don’t want to play "Shut Up Kiss Me." But we’ve found a way to make it fun in a live way, where we pretend like we’re just playing the song for the first time — like I just wrote it the night before, and that really helps me get into it, [pretending] I’m trying to teach the band a song on stage. And then everybody is like, "Oh my god, she’s about to play a new song, that’s so cool,” and then we just play “Shut Up Kiss Me.”

You gotta get creative with it. It’s like musical role play.

I’ve also thought if I really didn’t want to play a festival and I ever had a breakdown, instead of getting upset and yelling and crying onstage, I would just play a song over and over and over again, maybe four or five times, to the point where it’s not funny anymore and people are legitimately worried.

Would it be one of your songs?

I think it would be one of my songs. I think it’d be “Forgiven/Forgotten” — imagine that like five times in a row, at a festival in the hot, hot sun.

Is there a band that gets a lot of flack that you love un-ironically?

I know this is going to be so typical of me to say, but I’ve always really enjoyed seeing Mac DeMarco play live. Mainly because he has such a direct connection with his fans that I haven’t seen in live performances, ever, since I’ve been playing music. I’m not impressed with everything that he does — I don’t think he’s impressed with everything that I do. But I really like that he invites his friends who are also musicians to sit on stage with him and just enjoy the dinner party of his show. It’s all encompassing: He’s a comedian, he’s a friend, he’s connecting with his friends and his audience, he’s making fun of himself while in the process of it.

I think a lot of artists try to separate themselves or go into theatrical performance and not engage with the audience, and I think it’s important to engage, to be able to take the flack on stage if it comes at you. I think it’s really important to have something in your back pocket. Because you’re putting yourself out there. You can’t expect there aren’t gonna be some trolls waiting for you to f*ck up.

Have you felt that on stage?

Oh yeah, throughout the years. But I’ve also been heartened by it, in a way. I have things that I calculatedly say back to anyone who heckles me or crosses me while I’m onstage. The thing is, everyone looks at someone onstage and says, “You think you’re so much better than us because you’re up there.” And I’m like, I’m up there, and it takes a certain amount of strength to be so vulnerable in front of that many people. I don’t think that that’s necessarily better, it’s just a task that, until you do it, you really don’t understand it’s not about being better than anyone. So I see right through it. It’s interesting to see how other people deal with flack. I think it really shows who they are as a person.

What’s the way you deal with hecklers when you’ve encountered them?

To laugh. To be like, "Oh, you wanna book a show here? I know the booking agent, I know the guy who books the place, if you’d like his number, I’ll give it to you after the show, and you can come up here and try it out."

On Karaoke & The Song To Play At Her Funeral

Oh yeah. Right now I’ve been thinking about karaoke a lot and I really want to sing “Silent All These Years” by Tori Amos. Yeah, I really, really wanna sing that at karaoke sometime. My friends have been talking about doing a quarantine karaoke outside.

That sounds nicer than Zoom karaoke.

I just don’t want to look at my computer more than I already do.

I was just thinking about my funeral last night [laughs].

Really? In what context?

Me and my friend were talking about how her dad already bought his funeral. You know, we gotta get on this sh*t, you have to do certain things to write your will, because if you don’t get it done the right way, [your inheritance] actually doesn’t go to the people you want it to go to. So we were talking about that, and then I was like, “If I die, please play this song at my funeral.”

So you have a song.

I mean, I’m sure there are songs I’d say on a different day, but Percy Sledge's "Come Softly To Me" — I love that song. And then wedding, I don’t know. "Anyone Who Knows What Love Is (Will Understand)" by Irma Thomas.

That’s funny you were thinking about your funeral last night.