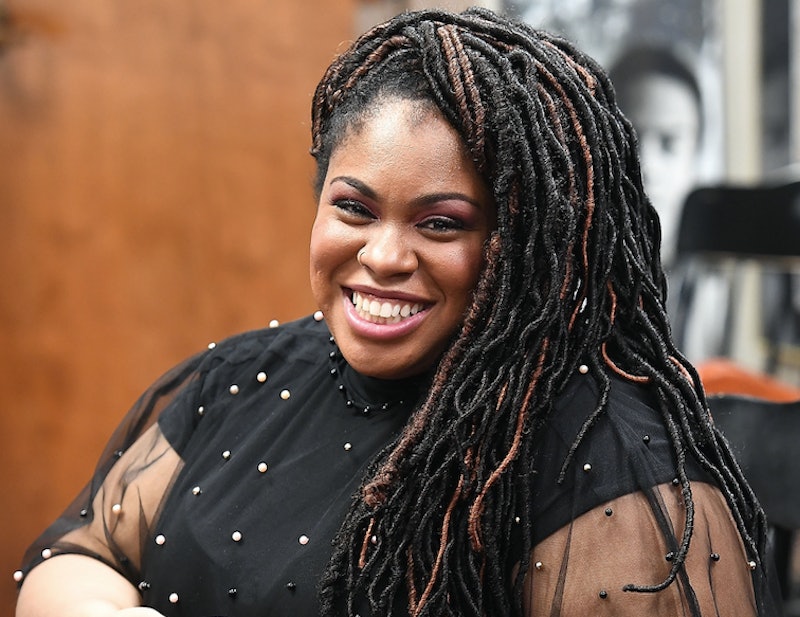 Angie Thomas was at a recent Black Lives Matter protest in her hometown of Jackson, Mississippi, when she looked out into the crowd and saw a familiar image. "Young people had recreated the cover of The Hate U Give [on a sign]," Thomas tells Bustle. The cover features an illustration of the main character Starr holding a sign bearing the book's title; the protesters replaced the book title with their own words. "One said, 'No more names.' [Another said], 'A system cannot fail those it was not designed to protect,'" Thomas says. "It just blew me away."

In the wake of George Floyd's murder at the hands of the Minneapolis police, the author heard from readers nationwide who have been inspired to take a stand after reading The Hate U Give, which centers on Starr, a teenager who watches the police kill her childhood friend. “I've been hearing from young people who led protests in their cities or on their school campuses because they were like, ‘I saw that Starr did it, so I can do it,” Thomas says. "That's the legacy I want right there. I always say, 'I never want to be their voice, but their microphone.' If I can help them find their voices, then so be it."

It's an overwhelming time for Thomas, who's kept plenty busy between protesting and partnering with the Decameron Project, a student-led initiative connecting young writers with one another during the pandemic. She's also in the midst of revising her latest novel Concrete Rose, a prequel to The Hate U Give, before its January 2020 release. The book follows Starr’s father Maverick, a man who Thomas has come to see as a symbol for George Floyd. Here, Thomas reflects on TikTok activists, the banning of her books, and what she hopes readers take away from Maverick’s story.

The Hate U Give is in many ways a manual to help galvanize young readers and set them on the course to activism, which is most likely why it’s banned in many school districts. How has it felt to see the teens who need it most being denied access to your book?

I wish that adults would start to put their discomfort aside and prioritize the growth of our young people and the mirrors that they desperately need so that they don't repeat the mistakes of past generations. A lot of times when The Hate U Give is banned, they use the language as a cop out. But if it is “the language,” I wish that they were more angry about the 800 people who were killed at the hands of police brutality last year as opposed to the 80-something F-bombs in my book.

When you're banning the book, you're telling the young people who see themselves in these characters, “Your story doesn't matter. Your life doesn't matter. I don't want to hear your narrative.” And that angers me. For you to tell them, “Your story makes me so uncomfortable, I don't want anyone to have access to it,” you're telling them essentially, “You make me uncomfortable.” We can't stand for that.

You’ve said that “The teens I write for now are going to be politicians with Twitter accounts tomorrow.” This prophecy is already coming true — they’re the teens with TikTok accounts who are buying out the tickets to Trump’s Tulsa rally.

It's incredible to me. They're not using their youth as an excuse or as a cop out. They're like, “No, we know what we can do. We know what we're capable of. We know our power.” That is phenomenal. I look at what they did with that rally and none of the adults were in on it. I've read of so many parents who went and excitedly told their teen, “Look what these kids did on TikTok.” And they're like, “Oh yeah, I knew about that. I did it.”

It reminds me of a tweet I saw go viral about the role teenagers played in the Tulsa rally: “That wasn’t a prank; it was activism.”

It's new age activism. I think what people fail to remember is that so many of our social justice movements have been led by young people. I look at the civil rights movement. There were so many young people. Even Dr. King himself was young, he wasn’t even 40 when he was killed. So for years and years of his life, he was doing this work as a young man. Young people have that power, and I'm glad they use it in a way that we're not necessarily used to. They didn't go into that rally and take those seats and protest there. They did something even smarter. They sent a message to not just the president, but to all of us to show us their power and what they are capable of doing. I was so proud of them for that and impressed.

You were inspired to write The Hate U Give after seeing the reactions that came from the police shooting of Oscar Grant in 2009. Has the response to George Floyd’s murder also been fueling you creatively?

I will be honest, it’s drained me in a lot of ways. I was revising Concrete Rose when Mr. Floyd lost his life. I remember seeing the video. I had to close my computer. I was not able to even get back on the computer for the rest of the day. For a moment there I was like, “I'm writing a book set in 1998. I get to go back to a ‘different time.’” But it wasn't. The only difference between 1998 and 2020 is that in 1998 they did not have cell phones to record things happening. That's it.

Another thing is that when I saw people who tried to justify that it was okay that Mr. Floyd lost his life because he wasn't a "perfect individual," it made me think about the young people who are going to pick up Concrete Rose and see themselves in Maverick, a very imperfect young man. Maverick is a young Black male who, when he steps on an elevator, white women hold their purses closer. If he encounters police, they're going to assume the wrong thing at the wrong moment. I thought about him when I saw the real Mavericks out there — and the messages we're sending to them when they see someone try to justify a death like this. What it says to them about their life. So in some ways, it fueled me to write that character as a dedication to them even more so and to tell him as truthfully and as beautifully as I could.

Is there anything you would have changed or wish you could underscore as newfound activists turn to The Hate U Give?

I wish I would have addressed Starr's mental health and the importance of taking care of your mental health. This is a marathon, not a sprint. The civil rights movement took two decades of work. So we're looking at decades of work [right now]. And in that marathon, we have to take care of ourselves. I wish I would have emphasized Starr getting help, seeking help, and taking that stigma off of mental health — especially in the Black community. I also want young people to recognize that Starr is afraid. There's a line in the book where her mom tells her, “Brave doesn't mean you're not scared. It means you go on even though you're scared.” It takes Starr time to find the bravery to speak up and speak out. So it may take you time. Pace yourself. Don't be hard on yourself. And also recognize you're not alone in this.

You’ve been writing about police brutality for over a decade. Does the current movement actually feel different to you than say, the 2014 protests in Ferguson? Are you hopeful real change is coming?

More like this
We’ve Entered The Hot Boy Reader Era
By Samantha Leach
Netflix Shut Down 'Bridgerton' S3 Rumours About A “Very Dark” Storyline
By Bustle
Jessica Simpson On The Time She Was Pursued By A Backstreet Boy & An *NSYNC Member
By The Editors
Your Guide To Watching 'Everything Everywhere All At Once' In The UK
By El Hunt and Sophie McEvoy
Get Even More From Bustle — Sign Up For The Newsletter
From hair trends to relationship advice, our daily newsletter has everything you need to sound like a person who’s on TikTok, even if you aren’t.