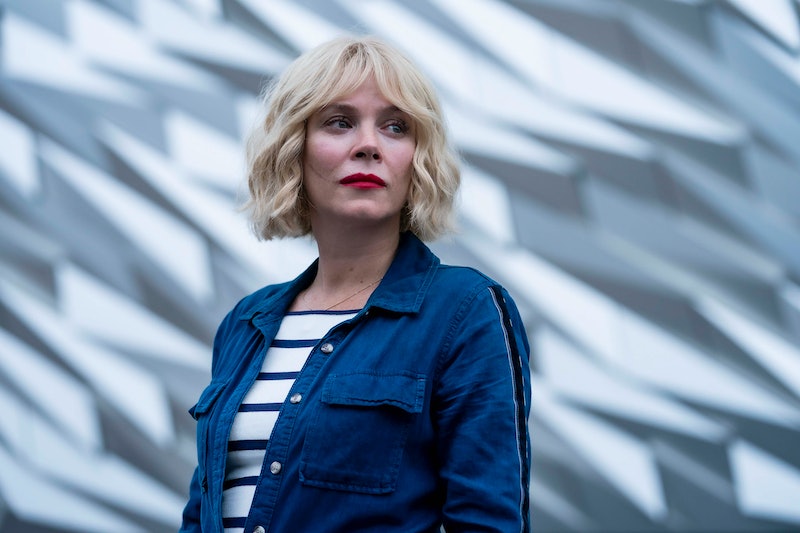 Anna Friel has reprised her Emmy-winning role as troubled police officer Marcella for season three of the acclaimed ITV drama — however, Friel almost looks unrecognisable as the show takes on a dramatic new twist. More than three years after the explosive second series aired in the UK, Marcella returns with an entirely new identity, a new location, and, for undercover mission purposes, the cop is sporting a new blonde hairdo. The question is does Anna Friel wear a wig to play Marcella in Series 3?

It seems Friel didn't have to commit to a radical makeover to play Marcella as Friel's brunette locks have been hidden under a blonde wig in the new season.

After faking her own death in Series 2, the blonde hair is crucial to concealing Marcella's identity as she takes on a new life in Belfast as "incredibly sexual" Keira Devlin. In the new episodes, which are available to stream on ITV Hub, Keira/Marcella is now working as an undercover cop helping to infiltrate a crime family in Belfast — and alongside the hair, she's adopted a whole new persona.

"My favourite thing was being blonde," Friel shared to The Mirror, "because it just gave her a whole different feel and swagger.

"I wouldn't say Marcella is an incredibly sexual person and she doesn't sexualise herself — but Keira does," she explains.

Friel goes on to explain how the costumes from earlier seasons (mainly consisting of sensible jumpers) also had to change.

"In the first two seasons we were talking about a woman who had just been left by her husband, who didn't feel particularly attractive," Friel explained to the tabloid.

"She [Marcella] wasn't about to walk into an office having very tight things showing off any cleavage or shape, in a fashion that perhaps men would like," she adds.

"But being Keira she realises that's a necessity and starts to enjoy a ­little bit more being in her own body and using that to her own advantage. She sees what a powerful tool that can be."

According to Friel, the very troubled detective is enjoying her flashy new lifestyle a little too much.

Speaking to RadioTimes, Friel explained: “Marcella is much more preferring Keira and I’m not sure if she wants her old life back. I don’t think she thought there was anything redeeming about herself and she has no point to live and that makes her even more fearless. And then she starts to come part of a world and starts to question her own moral compass and integrity.”

Season 3 of Marcella aired in the US in 2020. UK fans can finally catch up on all eight episodes on ITV Hub now.