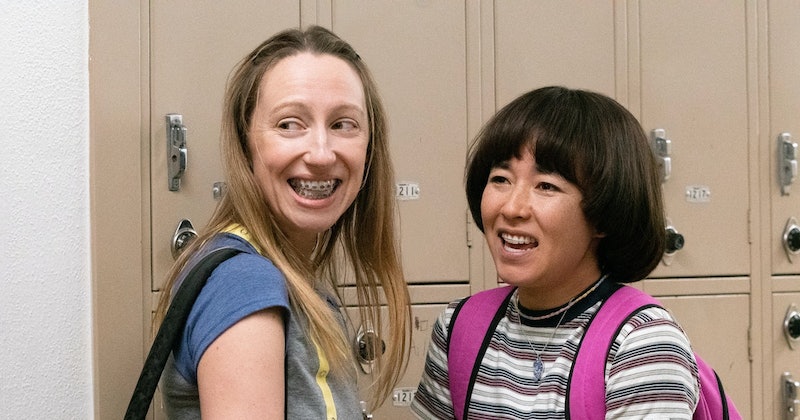 Spoilers ahead for Big Mouth Season 4, Episode 4, "Cafeteria Girls." It feels like it was only a matter of time before PEN15 and Big Mouth crossed over. Both shows navigate the horrible awkwardness of puberty and middle school with a shared sense of raunchy humor, and despite being on different streaming services — Big Mouth airs on Netflix, while Pen15 is on Hulu — Big Mouth was able to make their universes collide in its newly released fourth season. Well, sort of. Anna Konkle and Maya Erskine guest star in Episode 4 of the season, and while they're not playing their PEN15 characters, they're pretty close.

Andrew and Nick put the moves on the new girls, with Nick gravitating toward the shorter Misha and Andrew chatting up Izzy. After some clumsy flirting, they make plans for a Starbucks date, followed by a much higher-stakes "makeout party" at Nick's house. Without spoiling what happens, let's just say that Anna and Maya would be proud of how Izzy and Misha handle the clueless boys.

The episode also contains a number of PEN15 Easter eggs. In one aside that highlights some notable Anna and Maya traits, Izzy tells Misha not to "spaz out" like she usually does, with Misha only agreeing if Izzy promises not to sing. Izzy responds by singing that "promises are made to be broken." Misha is also seen dry-humping the couch and is quite a bit more interested in sex than Izzy, mimicking Maya's propensity for full-body masturbation. But the most obvious reference to PEN15 comes near the end of the episode in a fourth-wall-breaking moment when Nick declares that the girls are on "our show" (aka Big Mouth). The girls reply that Nick and Andrew are actually on their show, and while you half expect them to say "PEN15," they instead reveal a live studio audience and the intro song to their sitcom, Cafeteria Girls. Eh, close enough.

While Konkle and Erskine's appearance on Big Mouth doesn't quite qualify as an official PEN15 crossover, seeing them finally cross paths with their spiritual counterparts on Netflix still makes for one funny half hour of TV.