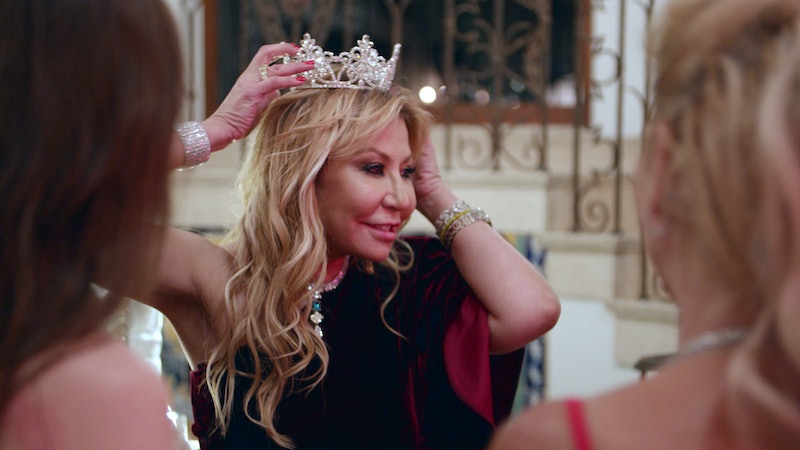 It was clear from the Bling Empire trailer that Beverly Hills socialite Anna Shay is a character, and the woman does not disappoint. She's introduced as the daughter of a man who sells bombs and guns, and according to her costar Kane Lim, she'll "cut you" if you cross her. But she has a fun side, too. And she certainly knows how to deliver a quotable one-liner. "There ain't no dick that good," she tells castmate Kelly Mi Li at one point.

Get to know more about the heiress to a fortune worth hundreds of millions of dollars below.

Anna is the daughter of Ai-San, a Japanese American woman, and the late American billionaire Edward A. Shay, who founded Pacific Architects and Engineers (PAE), a defense services contractor that specialized in top-secret work for the United Nations and U.S. government. According to TV Guide. Anna and her younger brother Allen sold the company to Lockheed Martin for $1.2 billion in 2006.

Anna also has one son, 26-year-old Kenny Kemp, who she gifted a $5.75 million mansion last year. Variety described Kenny as a "hardcore cannabis aficionado" in an article reporting the sale, and BuzzFeed credited him similarly, calling Kenny the "sole heir to hundreds of millions of dollars and a passionate stoner" in a 2015 article. His father is named Ken Kemp, per Anna's mother's 2015 obituary.

Anna's father never wanted her to work, but she previously served as a board member for the George Lopez Foundation, which raises awareness about kidney disease and organ donation. She's said she's "passionate about the world of art, the world of music, and fashion," and has worked for the Shay Foundation, which her late parents founded, focusing on education, arts, performing arts, and music. The Shays were also founding members of The Music Center in Los Angeles.

After spending nine years in a nearly 9,000-square-foot mansion, Anna listed her Beverly Hills home for $16 million in December. (She originally paid $9.4 million, per Variety.) Shirley Temple and mafia boss Tony Milano both reportedly lived in the house previously.